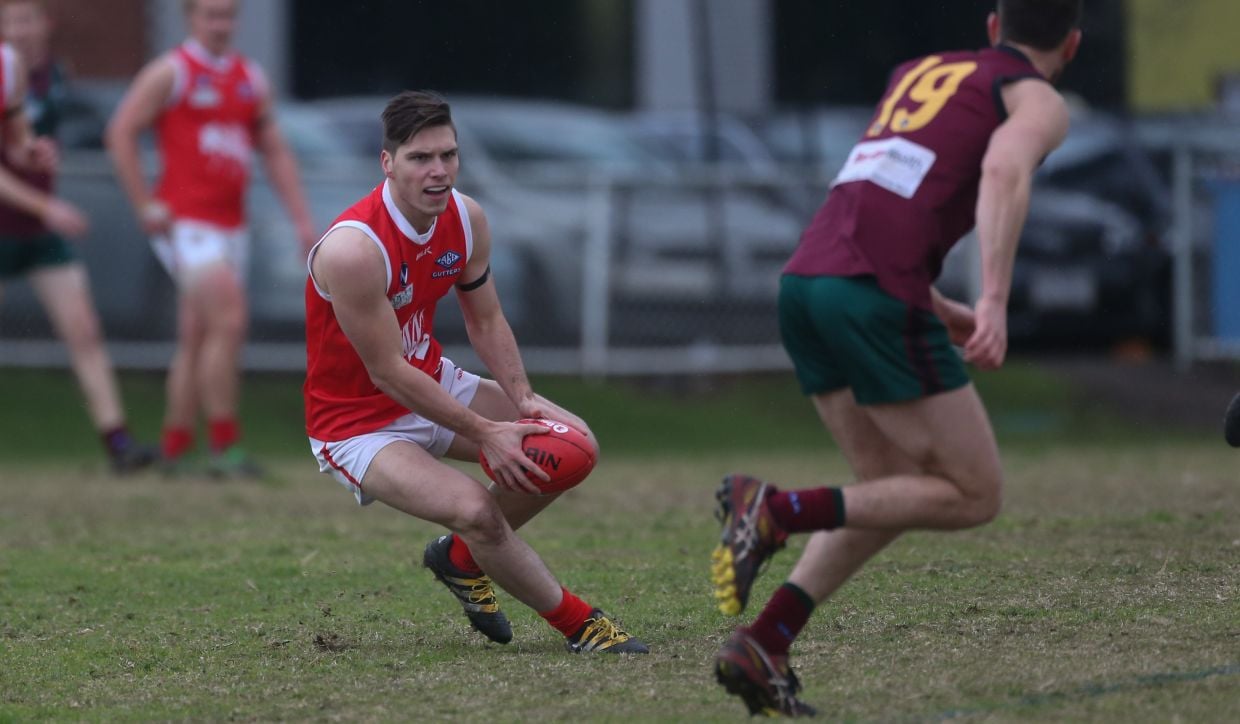 The penultimate round of the season made the finals picture no clearer, leaving positions two to four on the ladder still up for grabs.

The Preston Bullants kept their chances of a second place finish alive as they came from behind to defeat Emmaus St Leos by 26 points at Bennettswood Sports Ground. Despite having nothing on the line, Emmaus St Leos started the brighter of the two sides with 5.4 to the Bullants 3.0 to lead by 16 points. Both sides continued their goal scoring ways as they added four goals each but two behinds for Preston saw the margin sit at 14 points. Both sides tightened their defence after the long break, as Preston slowed the Animals to one goal as they added two to have them in reach, still trailing by five points. Sadly, for Emmaus St Leos, their control of the game disappeared in the last and seven goals to two saw the Bullants run away with the points. Sean Calcedo was the Bullants best, with Jake Powell dangerous in front of goal with five majors. Chris Beluszar and Daniel Hill kicked four apiece for the Animals, as Jonathan O’Connor was their best in defeat for the second straight week.

There is now only one percent between fourth and fifth place as MHSOB travelled to Doncaster Reserve to defeat Yarra Valley OB by 29 points. Needing a win to stay in the finals hunt, MHSOB were the stronger side out of the gate and putting a 19-point gap between themselves and Yarra Valley OB after a five goal to two quarter. The Bushrangers completely controlled the second quarter but inaccuracy stopped them pushing away from MHSOB, as they kicked 3.7 to 0.2 to lead by four points at half time. Coming out of the break, the Unicorns unlike the Bushrangers did take advantage of their opportunities kicking seven goals from their eight shots to two goals for Yarra Valley OB to lead by 25 points at the final change. In the final quarter both sides had success in front of goal with MHSOB getting the best of it with five goals to four to extend the lead and secure the victory. Nathan Hawking was unstoppable up forward for the Unicorns with six goals, as Anthony Svirskis was the best on the ground.  Ryan Pollard was gallant in defeat for the Bushrangers, with Jordan Canham their best target with three goals.

Despite a slow start, Bulleen/Templestowe defeated Richmond Central by 74 points, inflicting the Snakes their 15th loss of the year at Kevin Bartlett Reserve. The game started in a tight fashion with three goals to two in the favour of the Bullants to lead by six points. Bulleen/Templestowe’s defence remained steadfast as they only gave up one goal in the second, but couldn’t add more than two themselves to only extend their lead to 14 points. Still in the hunt for their first win and in position to give themselves a chance, Richmond Central’s leaky defence returned in the second half as they allowed five Bullants goals to their two to see the margin swell to 30 points at three quarter time. The momentum remained in the final quarter as the Bullants slammed on eight goals to one to put more pain upon the Snakes season. Leith Wallis kept up his good form with a best on ground performance, with the damage up forward done by David Dakin and Michael Pace with four goals each. Paul Holland was the Snakes only multiple goal kicker with two goals and Patrick Boyle battled hard all day.

St Johns OC overcame a quarter time deficit and then held on for a four-point victory over West Brunswick at Ransford Oval. With the possibility of taking first place finish, West Brunswick were stronger from the first bounce adding 3.3 while holding St Johns OC to 1.4 to lead by 11 points by quarter time. After the low scoring first quarter, the two sides combined for 11 goals with six for St Johns saw the game tied at the half time break. Following the break, the JOC’s kept their momentum going to lead by 18 points at three quarter time, adding four goals to one for the quarter. They would add two more in the last but allowed four Magpie goals to have a nail biting a finish that would see St Johns OC hold on. Daniel Abou-Karroum was the best on ground for St Johns OC, with Trent Edwards slamming through five goals. Bill Irving and Zac Tisdale kicked three each for West Brunswick, with Chris Simpson battling hard to get them over the line.

The final round sees three games that will have an effect on the makeup of the top four. The game of the round sees MHSOB host West Brunswick at Melbourne High School with the Unicorns needing a win to make finals, whereas the Magpies need a win to secure second place. Yarra Valley OB travel to Ted Ajani Reserve to face Bulleen/Templestowe with a win nearly securing fourth place as long as MHSOB don’t win by 60 points more than the Bushrangers. Preston Bullants host Eltham Collegians at W.R. Ruthven Reserve, with a win and a West Brunswick loss securing second place. The final game sees minor premiers St Johns OC host Richmond Central at Thomas Carroll Reserve, as the Snakes have their last chance to prevent a winless season. Emmaus St Leos season is over as they have the Bye and have no effect possible on the ladder.

Emmaus St Leos has the Bye