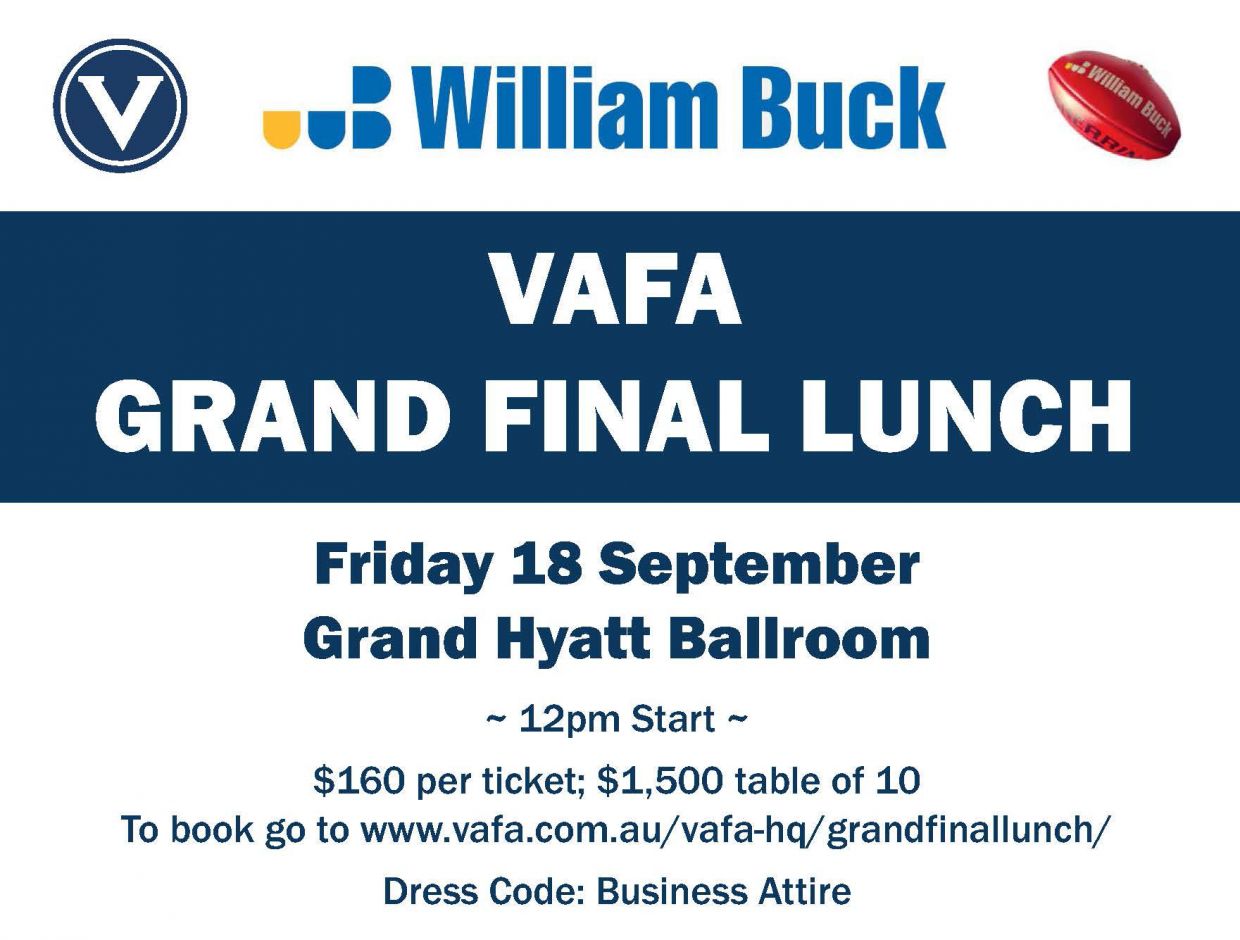 The Victorian Amateur Football Association invites all members of the VAFA community to the 2015 William Buck Grand Final Lunch at the Grand Hyatt Ballroom, Friday 18 September.

Similarly to the 2014 luncheon, this year’s event will be hosted by Barrie Cassidy and will feature special guests Leigh Matthews and Greg Champion.

Ex-Hawthorn legend and player voted the greatest of the 20th Century, Matthews has a list of achievements as long as his 332-game playing career. He is an eight-time club best and fairest, four-time premiership player, four-time premiership coach, AFL Team of the Century inductee and three-club Hall of Fame inductee (Hawthorn, Collingwood and Brisbane).

Champion – who will be performing on the day – is an Australian songwriter, guitarist, radio personality and athlete. Best known among the Australian Rules football fraternity for penning cult classic ‘That’s the thing about Football’, Champion was awarded 2010 Victorian Male Vocalist of the Year in the Victorian Country Music Awards.

Political journalist and former Insiders and Offsiders television host, Cassidy has built a highly respected reputation during his 46-year career due to his ability to observe and subsequently provide expert analysis on Australia’s political affairs.

The VAFA Grand Final Lunch will give attendees the opportunity to celebrate the achievements of the newly crowned VAFA premiers from the weekend prior, as well as a chance to preview the three Premier section grand finals taking place on the ensuing weekend.

Tickets are $160 per person or you can book a table of 10 for $1500. If you wish to book a table, please contact the VAFA and arrange for your company name to be listed prior to purchase.

All enquiries should be directed to Ally Handley via email or on 03 9537 6777. Alternatively, tickets can be purchased HERE.

To gain an insight into the VAFA Grand Final Lunch, we have compiled comments from five of last year’s attendees:

“The VAFA lunch was a big success with a room full of so many who have contributed to what is one of the best competitions in the land. Whether you have used the amateurs to launch an AFL career, played 300 games, coached or administrated at any grade, the lunch celebrates everyone coming together at a terrific time of year for football. I hope it remains on the calendar for many more” – Toby Roberts.

“The 2014 VAFA Grand Final Lunch at the Grand Hyatt was a terrific afternoon. Our guests who all had links to the Amateurs thoroughly enjoyed the Grand Final Preview along with the outstanding interview with Mark Thompson at such a topical time” – Sam Bingley.

“In 2014, the Hawthorn Amateur Footy Club took half a table at the VAFA Grand Final lunch and invited three of our sponsors along as a thank you for their ongoing support. The lunch is in a fantastic venue, fitting of such a gala event and the entertainment provided (along with the meal) were ideal to impress our guests. Personally, I really enjoyed meeting some key people from other VAFA clubs, and it was nice that the official run-down of the day included a presentation on stage to every club that won a senior premiership the previous weekend. I am looking forward to attending again this year and taking a few different sponsors along. Entertainment by Leigh Matthews and Greg Champion should be great – maybe Greg Champion will sing a footy song about Michael Sholly!!!” – David Clancey.

“The 2014 VAFA Grand Final Lunch was the perfect way to commence celebrations at the pointy end of the football season. The level of entertainment and the insight provided by the special guests made for a memorable event which ended up stretching into the evening. Having an opportunity to enjoy the company of friends, colleagues and ex-team mates alike means I’ll definitely be back again this year” – Dean Elliot.

“I was fortunate to have attend the inaugural VAFA Grand Final Lunch at the Grand Hyatt last year. This function gave representatives from clubs across all divisions an opportunity to be part of the experience and excitement in the build up to the VAFA Premier Division Grand Final weekend. It also gave those attending a great opportunity to celebrate the end of the season in true VAFA sprit. It was an outstanding success” – Peter Grant.