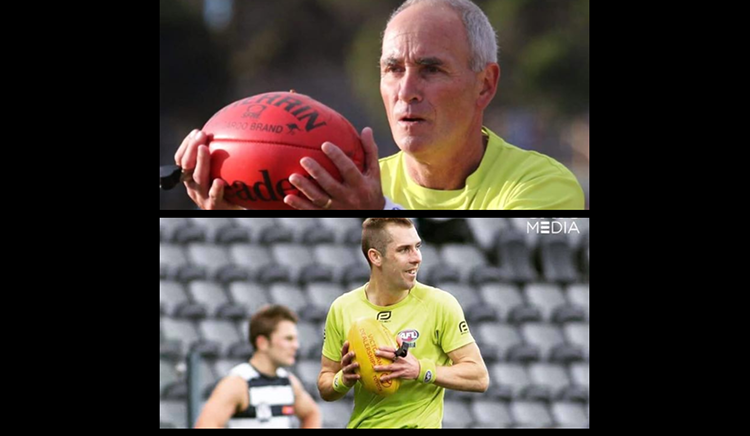 The VAFA Umpiring Department would like to announce its coaching panel for the 2019 season, with further announcements around training and support staff to come prior to the resumption of pre-season training at Elsternwick Park on Monday 4 February.

Headlining these announcements is the appointment and addition of Peter Marshall as Senior Squad Coach – Field & Andrew Leggo taking on a role as Development Coach – Boundary (both pictured).

While joining the VAFA in 2019, Marshall also currently fulfils a role as a Match-Day Observer for umpires at the VFL. His wealth of knowledge and standing within community football and umpiring over an extended period is unrivalled. Marshall is also heavily involved in cricket, currently coaching the Malvern CC after a long career at McKinnon CC.

Umpire Operations Manager Haydn O’Connor said “acquiring someone of Pete’s calibre to the VAFA is a fantastic addition to the umpiring group and the association more broadly”.

“It certainly is an exciting appointment for all in our senior ranks and all squads to have access to someone who’s reputation, passion and familiarity of umpiring at all levels is unmatched.”

Peter will take control of the Senior Squad while Tony Hales, in his 10th year at the VAFA, will continue his position as the Premier Squad Coach. Hales and Marshall have worked together previously at the MPNFL and will provide all VAFA umpires across all disciplines with an exceptional resource in community football.

They will be joined by Peter James & Mark Gibson as Senior Assistants, both of whom have outstanding history within the competition and at higher levels, along with Guy Hexter who continues his exceptional job as Development Coach with a focus on fostering the VAFA’s talent pathways.

The VAFA has also invested in its boundary umpires with the appointment of Andrew Leggo as a Development Coach to assist with Ryan O’Shea as Head Coach and join Asha Hinton & Jack Punshon in the role of educating the boundary group.

Andrew had an extended career with the VFL, culminating in over 100 senior matches, and joins the VAFA in 2019 with a view to give the Boundary Umpires a firsthand look at the skills required to achieve at the highest levels, whether that be within the VAFA or beyond.

“To gain Andrew straight from the VFL Senior List, with his friendly persona and skill set, is a wonderful asset to the Coaching Panel and our young boundary umpires who are vitally important to our list overall,” O’Connor said.

Stability within the Goal Umpires continues as Bernard Jephson, Shane Herbert & Charlie May will all be returning to the VAFA Coaching Panel with a strong list and a continued outstanding presence at higher levels.

“Giving our umpires the best resources possible via training venues at Elsternwick Park & Koonung Reserve, partnerships with the SMJFL & Yarra JFL and the best coaches in community football is our priority and we will continue to give those who umpire with the VAFA the opportunity to develop their skills on the field and try to be leaders in the community off it”.

Further announcements will be made in coming weeks. Stay up to date by following “VAFA Umpires” and “VAFAUA” on all social media platforms and www.vafa.com.au

To join the biggest club in the VAFA, visit https://www.vafa.com.au/vafa-umpires-recruitment/ or email [email protected]