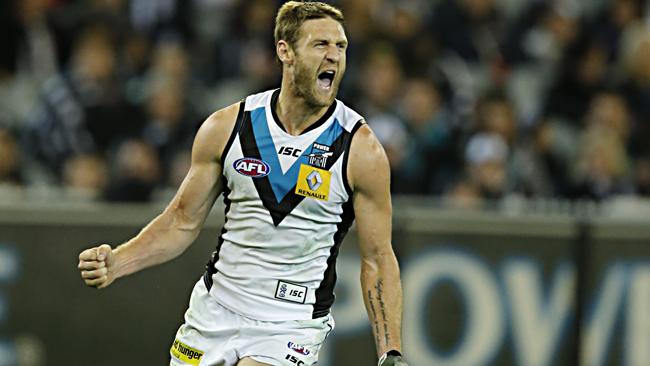 St Kevin’s has snared the highest profile recruit of the off-season by securing the services of 193-game AFL player and four-time Port Adelaide leading goal kicker, Jay Schulz, for the 2017 VAFA season.

Schulz, 31, will join SKOB’s forward 50 just months after announcing his retirement from the AFL.

St Kevin’s Director of Football, Michael Christian, told VAFA Media the Club is excited about adding the talented and experienced key position player to their list.

“Jay’s been an outstanding player at AFL ranks over a number of years for Richmond and Port Adelaide and we’re absolutely thrilled he’s agreed to play with St Kevin’s next year,” he said.

Leading goal kicker, Matthew Handley (Old Xaverians), and Al Armstrong (Old Melburnians) were the only power forwards in this year’s top 10 for goals as fast-paced Premier football is often dominated by smaller players.

Christian believes Schulz’s diverse skillset will allow him to adapt well to the VAFA’s style of football.

“He’s multi-functional in the sense he’s not a one-dimensional player,” Christian said.

“He’s very well-rounded, he’s quick on the lead, a strong and spectacular overhead mark and he is a beautiful set shot for goal.”

Commencing his career with Richmond in 2003, Schulz played 71 games over seven seasons before he was traded to Port Adelaide in exchange for Mitch Farmer. Once at the Power, however, Schulz evolved into a key pillar up forward and kicked 272 goals in his 122 games at the club.

Schulz will join former Melbourne Demon, Mark Jamar, in the blue, green and gold after he re-committed to the club following a stint with Essendon’s VFL side.

The 2010 All-Australian ruckman agreed to play with SKOB last season but did not register a game after he was picked up by the Bombers as a top-up player in the wake of the supplements saga.

SKOB boast an array of young talent after claiming both the Under 19 Premier and Premier Reserve flags in 2016 and envisage Jamar and Schulz’s experience at the top level will play an important role in the development of their junior players.

“We are very conscious about developing our young players from both Under 19s and the College and giving them an opportunity to play senior football with St Kevin’s,” Christian said.

“We believe we have a very good blend of experience from the top level of football matched up with a number of exciting young players who we hope to see play a lot of senior football this year or next.”

They will be led by North Melbourne premiership star and Norm Smith Medallist, Shannon Grant, after he was appointed senior coach in September. Grant led Greenvale to the EDFL finals over the past two years after coaching Frankston and Essendon in the VFL.

St Kevin’s finished the 2016 home and away season with eight wins and in eighth position on the ladder. Their average of 79.9 points for was the third-highest in William Buck Premier.

Star midfielder, Steve Salopek, announced his retirement at the conclusion of the 2016 season but with his good friend from Port Adelaide joining the ranks, SKOB live in hope he might play on another year.