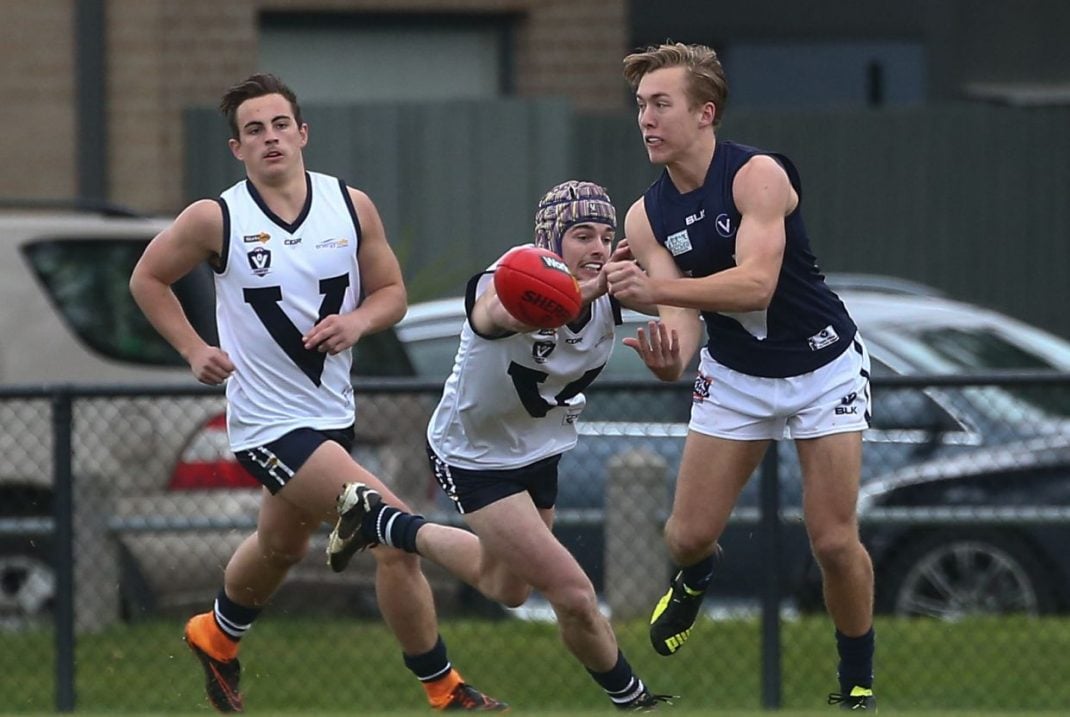 A six-goal to one final term has helped AFL Victoria Country to a 44-point win over the Big V in their U19 representative clash at Waterview Reserve, Mernda.

Trailing by just two goals at the last break, the Big V were unable to curb the Country’s firepower as they made full use of the southerly breeze and ran away with the comfortable victory.

Despite the loss, the Big V were brave throughout and reduced a 31-point half-time deficit to 12 points on the back of standout third-term performances from Chris Hughes (St Bernard’s), Alex Mastromanno (Old Brighton), Tom McKenna (Mazenod) and Spirit of the Big V recipient, Lachlan Byrne-Jones (Old Scotch).

17-year-old Mastromanno and Hughes were particularly dominant during the Big V’s comeback as both kicked two goals after the margin blew out to 43 points midway through the third term.

Mastromanno consistently used his impressive frame to bully his opponent out of the marking contest and nail set shot goals from both sides of the boundary.

Hughes was electric and played a hand in almost every play, following up his quick-fire pair of majors by lacing out University Blues’ forward, Matt Blair, for the second of his two for the match.

Old Haileybury goal sneak and Round 2 Grill’d Rising Star nominee, Corey Connolly, also kicked two goals for the Big V, including the goal of the day in the second term.

Thrown to the ground in a savage Country tackle, Connolly sprung up from the deck, pounced on the loose ball and dribbled a Daicos-esque stunner from the pocket to ignite the healthy crowd.

Earlier in the day, Old Melburnians’ Hunter Watkin embodied all the Big V stands for as he courageously went back with the flight of the ball and suffered a head clash with his Country opponent. Despite passing a concussion test, Watkin was taken to hospital and played no further part in the game.

The Big V were led courageously throughout the day as captain, Christian Carnovale (Hampton Rovers), often found himself at the coalface and consistently won the contested ball.

Harry Hill (Old Brighton), Ben Dance (St Bedes/Mentone Tigers) and James Landman (Ormond) found plenty of the sherrin, with Hill named the VAFA’s best player from AFL Vic Country coaching staff for his standout display. Hill’s Old Brighton connection with Mastromanno was on show as he found the four-goal star on the numerous occasions he sent the ball inside 50.