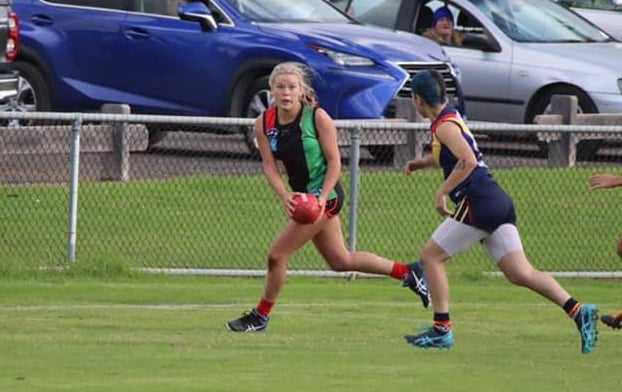 Congratulations to Aquinas defender, Carla Barics, who has been named the Round 10 Anytime Fitness Women’s Rising Star.

Carla was best afield in her side’s 44-point win over Richmond Central on Saturday, making it five appearances in the best players from her past six matches.

“Carla started her football career at East Ringwood Juniors in 2017 and crossed to Aquinas JFC in 2020 for the U18 season.

She has always been interested in footy and her dad started a new team as coach so she could play with friends.

Her intercept marking in the backline and attack on the footy is like Brisbane Lions CHB Kate Lutkins and add her exceptional foot skills as well she resembles Tom Stewart from Geelong.

Carla’s strengths include her attack on the ball both on the ground and in the air, intercept marking, exceptional foot skills and decision making. She is renowned for her foot skills, always hits a target coming out of D50

As an 18yo she is certainly more than holding her own at senior level and never takes a backward step. She has a highly competitive nature and elite skills which makes her a real threat.”