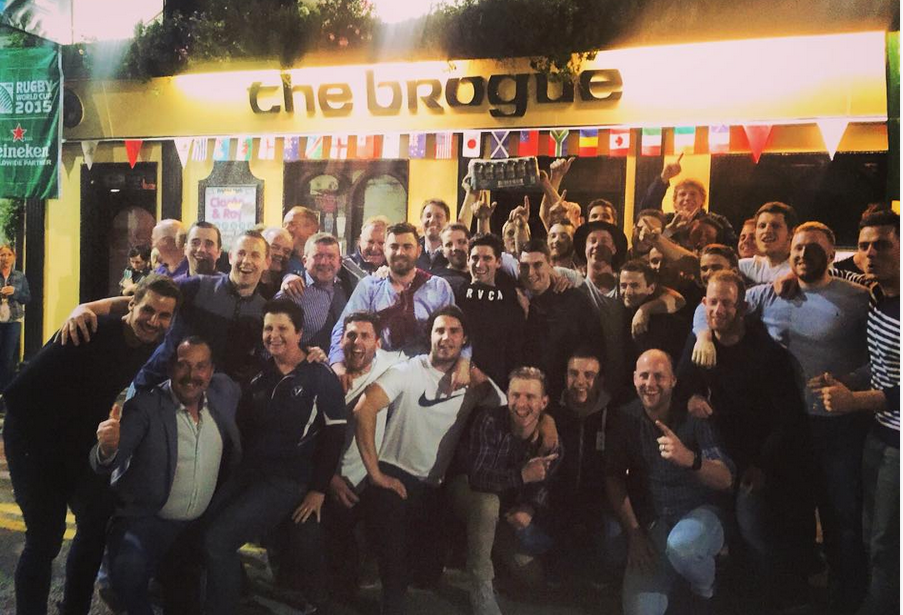 After rising early to meet at 6:55am we walked to the train station and purchased our tickets for the two hour ride to Belfast where we did a Black Cabs Tour around the city, learning about the IRA and events that had happened in the area. There were seven of us aboard the train with Tomo still in recovery mode and cracking a Guinness about five minutes into the trip. After he finished he punched out some Z’s for all and sundry.

Once we arrived at Belfast station it was a short walk to find some English pounds and book a couple of Black cabs. Wayne’s World Handley, Chopper and Rob ‘Cameras’ Viney were in one cab and Dan ‘Sloppy’ Silfo, Mark ‘Tomo’ Tomlinson, Jude and I were in the other.

Our driver Paddy was a 61-year-old who had grown up in the area and knew every second person on the street, as well as a few involved in the hunger strikes and riots of the 70’s. He took us to the peace wall were we could sign our name and leave a message. Somehow I don’t think ‘Go Pies’ was what they had in mind Sloppy. After a bite to eat at the Belfast Town Hall it was back on the train with a couple of lads and back to Dublin city. Fair to say it had been a pretty intense but informative tour with all of us appreciating how lucky we are to live in Australia.

On returning to Dublin, we stopped off for a quick halfa at the Duck in Pub to congratulate our tour guide Wayne’s World Handley. Others went shopping or did the Goal or Guinness Factory. Tonight was all about getting together as a group at Lombades Pub in Dublin – near Trinity College for the academically inclined. It was put on by the VAFA and thanks to Sholl for his hospitality. Our MC for the evening was Wayne’s World who had organised a number of speakers. Tom and Tony Caven, Damien Sullivan, Jude Barnes, Ash Viney, Harry Whitty, Stu Grigg, Cam Roberts, Chopper Handley and Michael Sholly all spoke about how good the tour was for developing new friends and spreading your amateur network. It was good to have an opportunity to talk to a few more of the boys about their views on different things, both footy and life in general.

Our last day in Ireland. Everyone was left to their own devices between the start of the day and 4pm when the bus was supposed to arrive. The bus finally arrived and it was a double decker that had been waiting around the corner for a good half an hour or so. Anyway, we board the bus and head out to Ashbourne to play Donaghmore/Ashbourne in our last game of international rules.

(See match report for details of the game)

After a good breakfast we boarded the shuttle bus for the trip to Dublin Airport, where the all-female Aer Lingus crew would take us to Heathrow.

Arrived at Heathrow Airport and after a wait the bus came and took us to the Ibis and the boys to the backpackers, before we all went out to dinner.

The tour group pass on their deepest sympathy to the Sullivan family on the sudden passing of Damien’s mum. Our thoughts are with you.

After a tour of Soho and a meal last night with Sholl, John, Jude, myself and John’s new friend Hayley, it was an early rise to go with Mugsy and JC to pick up tickets for the RWC Semi v Argentina at Twickenham. It was then on to Battersea Park for our Aussie Rules game v the London All Stars. Mugsy was heard to say “I hope they get used to the sight of my heels”.

On the way back we jumped off at Barnes Station for a quick selfie of myself with the station sign Barnes. Tickets collected successfully now time to focus on the footy and how to get there.

(See match report for details of the game)

After the game a number of players and parents were heading to the RWC – an opportunity too good to pass up – before joining the team back at the Clapham Grand to end festivities.

It had been a terrific tour from start to finish and a huge thanks to all involved. New friendships formed and great times had. The majority of the group head back to Melbourne tomorrow night as others depart for other destinations. Thanks Michael Sholly, Sam Confait, Christian Burgess and Board member, Anthony Amad, for your efforts. A job well done.

That’s it from me, all the best in footy.