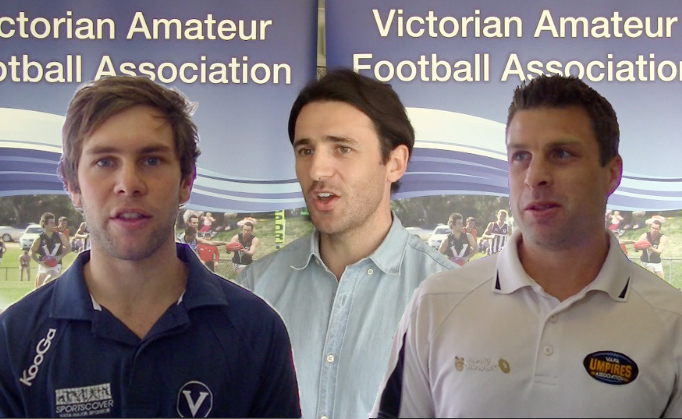 Want to stay involved in football but your body is giving up, then why not become an umpire. That is the message of former players Brent Wallace, Jordan Bannister and Andrew Hartnett, who have all taken up the whistle to extend their time out in the middle of the ground.
Wallace played VFL football for Box Hill Hawks and the highly regarded son of Terry said the career change from playing football to officiating has been incredibly rewarding. Brent also acts as the VAFA Umpire Recruiting officer and is keen to speak with any VAFA footballer who is keen to stay involved in the game after they have finished playing.
Bannister’s story is well publicised, the former Carlton and Essendon player went through the AFL’s player to umpire pathway and only has positive things to say about the experience. Bannister said umpiring at the VAFA was a great place to start.
Hartnett played in the VAFA but injuries had taken their toll. Keen to stay in the game but concerned about the time requirements of coaching with a young family saw him sample umpiring. Needless to say he has never looked back.
Watch the video below to hear from each of the three former footballers on the reason why taking up umpiring was such a positive for them.