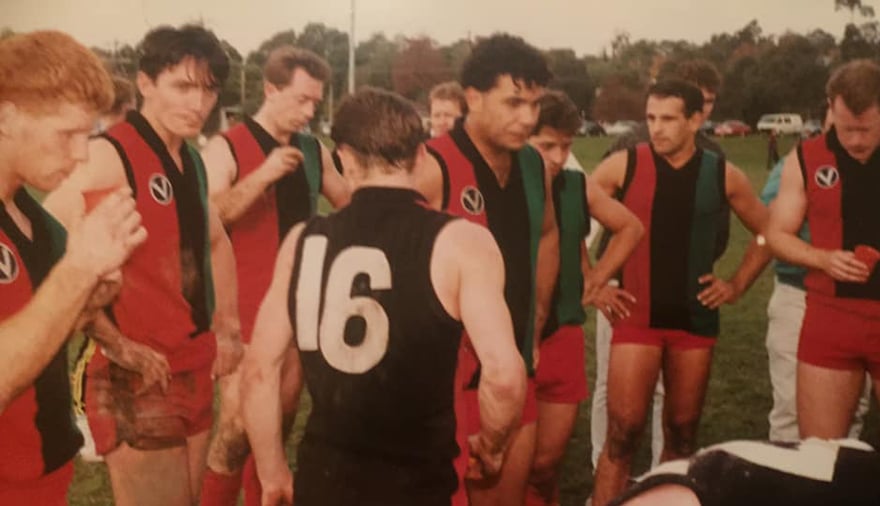 Bloods bounce back in ’87 thriller

Aquinas OCFC will celebrate their 40th year as a club in 2021 and there’s no doubt the 1987 F Section premiership will be high on the agenda.

While it was the Bloods’ first flag in the VAFA after they transferred from the Eastern Suburban Churches Football Association earlier that year, it was also their tightest, prevailing over Whitefriars by just one point.

Andy Whelan, who is just one of two Aquinas players to feature in each of the club’s first four senior premierships (1983-84, 1987 and 1996), joined the VAFA ‘Clubs in Focus’ Podcast and detailed the nerve-racking nature of the ’87 finals series.

“Put it this way, thank god I wasn’t 60, the heart couldn’t have taken anymore,” Whelan said.

After claiming the minor premiership with a 17-1 record throughout the home and away season, the Bloods failed to fire a shot in their second semi and went down to Whitefriars by 50 points. Despite having comfortably accounted for the Friars on both occasions throughout the year, Aquinas were soundly beaten with 24 scoring shots to 44.

“Whitefriars were unbelievable (in the second semi),” Whelan said.

“They marked everything, they looked like we were playing an A Grade side….they just tore us to shreds.”

After bouncing back with a 31-point victory over St Andrew’s in the preliminary final the following week, the Bloods set up a grand final showdown against the in-form Friars. The Bloods, however, regained their pre-finals form in a big way and led by as much as five goals midway through the fourth term.

“I think you lose sight of the fact that Whitefriars were a bloody good side and you only have to give them half a sniff and that’s what happens. They just got on a roll.”

Within moments, Whitefriars were dominating possession and piled on successive goals. After pulling the margin back to one point with one-minute remaining, the Friars launched one final attack inside 50 when Bloods defender, Terry Jones, etched his name into club folklore with a game-saving mark deep inside their defensive 50. Moments later, the siren sounded.

“It was Terry Jones – the wonderful Terry Jones – he was able to pull off the mark of the century in the back pocket,” Whelan said.

“Anyway, we started dancing, jumping all over the joint.”

Some say it was Leo Barry before Leo Barry, but to hear about this and other brilliant stories from Andy, Sean O’Loughlin, Peter Wright, Ash Naulty and Taylor Leslie, tune into the ‘Clubs in Focus’ Podcast above.