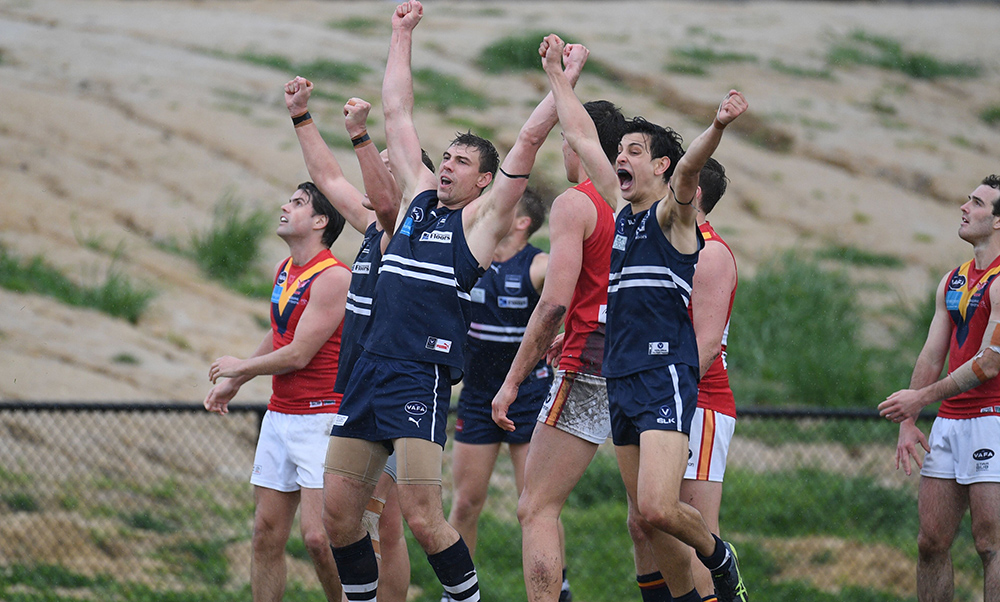 Capping off a historic year that saw them receive promotion back into William Buck Premier for the first time since 2012, and claim their most home and away wins in Premier B in over half a century (16), Caulfield Grammarians etched their names back into premiership folklore with a resounding 92-point demolition of Old Scotch at Elsternwick Park, hanging their 10th senior flag in the pavilion at Glenhuntly Reserve.

With very little separating the two sides all season, not even the proudest of Caulfield’s faithful would have believed this result was coming, as a complete, almost perfect four-quarter performance blew the game wide open early and proceeded to conclude with the largest margin of victory in a Premier B Grand Final since 1990, and the largest Grand Final victory in the VAFA Seniors competition since 2002.

Despite starting the year running out with Caulfield’s U19 side, youngster Lachie Stephens showed no signs of youth and inexperience on the big stage, claiming the 2019 Ian Cordner Medal in an outstanding best on ground performance, a major accolade that we will no doubt see more of as the young man continues to develop.

It was clear from the outset that the Fields had a plan of attack for their opponents, wear down the battered and bruised Scotch with wave after wave of manic midfield and forward pressure, as well as attacking the slightly hampered GT Moore Medallist Tom Downie with the plethora of big man stocks they possess.

Throughout the day, Declan Reilly, Jared Risol and Julian Dobosz took over ruck duties against Downie and did an outstanding job of limiting his usual tremendous impact. On top of this tactic, Caulfield’s renowned defensive scheme once against came to the fore as their forward half tackle pressure forced Scotch into kicking the ball long over and over again out of defence, resulting in constant turnovers and Caulfield gathering their greatest amount of scoring shots in a final since 2000 (39).

Thanks in large part to their relentless attack on the ball, as well as playing a man loose in defence for majority of the afternoon to help quell any rare forward entries by their opponents, the Fields’ limited Scotch to their lowest scoring performance since Round 18 2015 (23).

Wayward kicking (0.7 at one stage), mixed with a serious arm injury to inclusion Tate Short could have spelled danger for Caulfield, but once Will Osborn slotted an absolute pearler from the boundary on the cusp of half-time to push the margin out to 45-points, many knew that that was the straw that broke the camel’s back, and there was little Scotch could do stop this onslaught.

Osborn finished the day leading his sides goal-kicking with three, while Nathan Page, Brendon Goddard, Jack Wallace, Julian Dobosz and Lachie Stephens all kicked two. Joining the youngster Stephens in the votes was Jack Webster for his role in streaming the ball from defence into attack with his run and carry, ruckman Declan Reilly was outstanding on Tom Downie, and Jack Wallace who played a large role in forcing Scotch’s back-six into uncharacteristic turnovers all day.

For Old Scotch, a disappointing end to what was in large part a successful year for a club with such a young and inexperienced list. The goal was to return to William Buck Premier, and even though the year isn’t capped off with a flag, a strong off-season mixed with growth and development could see the Cardinals put in a surprising and competitive 2020.

Captain Gene van den Broek and Tom McKinley were the only goal scorers for Scotch with two apiece, with backmen Charlie Cormack, and midfield duo Jack Bull and Will Mitchell received the votes. For Bull, it will be the final time the Scotch stalwart will don the red #6, as he bows out after an illustrious career for his club that featured three best and fairest awards and Big V representation.

As Caulfield Grammarians and Old Scotch move back into William Buck Premier, Old Carey and De La Salle make the move into the competition from A-grade, while Monash Blues and Old Geelong are replaced by Williamstown CYMS and Ajax at the other end of the table.