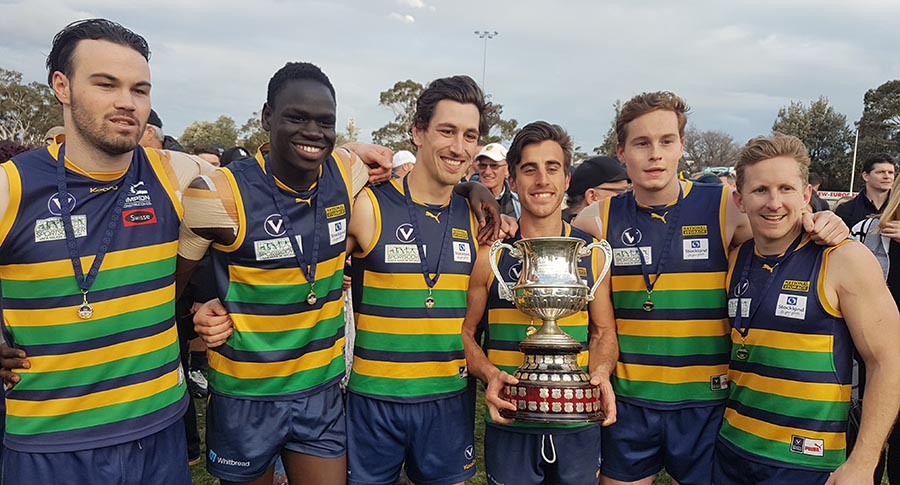 Is there more pressure on St Kevin’s OB in 2018 to win a second consecutive William Buck Premier flag and go back-to-back OR is there less pressure after they climbed the mountain in 2017?

SKOB Director of Football, Michael Christian, joined the boys on the For the Love of the Game podcast and was asked that question by Head of Media, Nick Armistead.

“I suppose that was a real monkey off the back (2017 premiership) given how well we had played,” Christian said.

“Certainly, getting over the line with that premiership was a real boost for the club. It’s first Premier division flag in 70 years, which is quite remarkable.”

Since 2011, SKOB lost seven finals before finally breaking through and winning the 2015 Premier B flag after trailing Old Melburnians by as much as 40 points during the third quarter to make the step up back into William Buck Premier.

They avoided relegation with an eighth-place finish in 2016, before acquiring more A-Grade talent the ilk of Mitch Brown, developing their juniors and taking out the ultimate prize with a three-point victory over Collegians last year.

During this time, Chrisso arrived at the club to assist then senior co-coach Daniel Harford & now, in his role as Director of Football, has gone about implementing grand plans to maintain and build upon their recent success.

“I think what we’re about and I’m certainly trying to push in all areas of the way we run our football club is to create a dynasty,” He asid.

“We all look at Old Xavier with great admiration of what they’ve been able to do through the 90’s and early 2000’s, we want to try and create a dynasty so that we can have sustained success.

It’s looking at all areas of the club to help create that and help make that happen. We still want to achieve, we want to win another premiership and that’s been our goal from the start of the year and that’s what we’re aiming towards.”

How can this dynasty be achieved & what plans have they put in place to continue their dominant run?

“It’s just fun playing footy at SKOB, it’s not a lot more than that. We try to create an environment, we try and nurture them and give them opportunities through the U19’s and then develop them to play senior football. One of our big aims is to have our players drafted whether by VFL clubs or ultimately AFL clubs.”

Keep up to date with everything happening in the VAFA on VAFA Tragics released every Tuesday night with Andrew Leonard and Nick Armistead + the VAFA’s official podcast For the Love of the Game released Wednesday afternoons with Joe Pignataro, Nick Armistead and Brian Waldron.