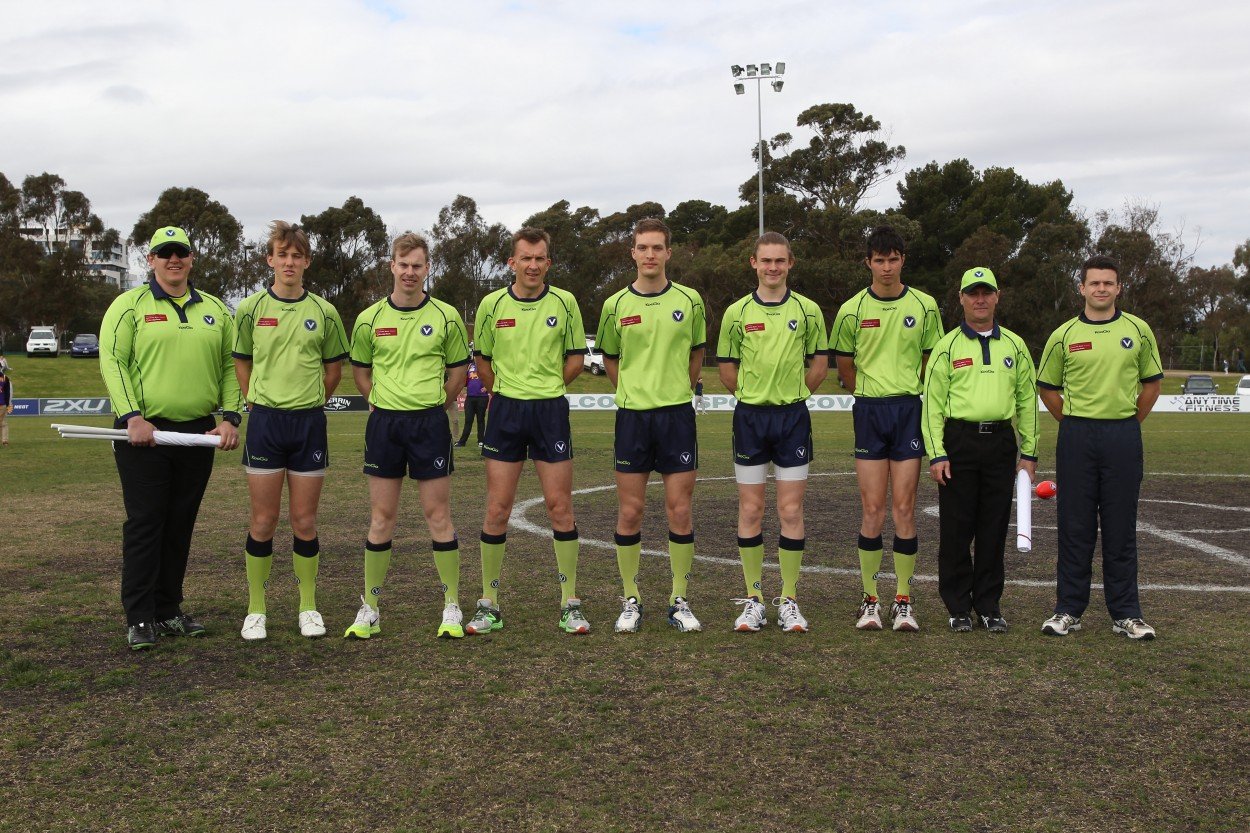 “COME AND UMPIRE IN THE BEST FOOTBALL COMPETITION. PERIOD”

The VAFA is seeking to bolster their umpiring stocks and in the words of one of their most decorated umpires, seven-time Premier Grand Final Umpire, Russell Davidson, “Come and umpire in the best football competition there is.”
Russell was also the VAFA Umpire of the Year in 2014 and has umpired at VFL level and at other competitions but always talks about his love for the VAFA.
The VAFA Umpires are not only the best paid (all tax free) at community level, but they also operate in one of the most welcoming and inclusive environments in football.
The VAFA Umpires are like a football club, with the same characters, fitness fanatics and camaraderie that any football club has. With over 400 umpires required on any given weekend of the VAFA season, the group of umpires in the VAFA range in interests and personality.
There are many former players amongst them, with many of them still thinking they have what it takes to get out on the field. There are also young up and comers who have aspirations to officiate at the highest level.
And why wouldn’t you start your umpiring career here?
Of the present AFL Umpires list there are eight field, four boundary and one goal umpire that started or had a significant part of their journey at VAFA level.
VAFA UMPIRES – AFL LIST
Jordan Bannister (Field) (2013 NAB Cup Grand Final Umpire), Chris Donlon (Field) (2011 AFL Grand Final Umpire), Leigh Fisher (Field) (Promoted in 2013 as part of the AFL’s player to umpire pathway), Simon Meredith (Field) (2012, 2013, 2014 AFL Grand Final Umpire), Robert O’Gorman (Field) (Promoted in 2014), Nick Brown (Field) (Promoted for 2015), Brent Wallace (Field) (Promoted for 2015), Matthew Jenkinson (Boundary), Damien Cusack (Boundary) (Promoted in 2014), James Scully (Boundary) (Promoted for 2015), Michael Saunders (Boundary) (2012/2013 NAB Cup Grand Final Umpire and 2013 AFL Grand Final Umpire) and Steve Piperno (Goal) (Promoted for 2015).
The evidence is just as strong when you consider those former VAFA umpires that are now on the VFL Umpires list.
VAFA UMPIRES – VFL LIST
Joe Hartwig (Development Field), Ben Nicholson (Development Field), Matt Pryor (Development Field), Charlie Blanch (Development Boundary), Andrew Heffernan (Senior Field), Daniel Lawlor (Senior Field), Jarryd Barry (Senior Field), Ryan O’Shea (Senior Boundary), Matthew Dervan (Senior Goal), Chris Doyle (Senior Goal) and Anthony Kyrkou (Senior Goal).
The VAFA pride’s itself on the standard of umpiring and indeed the level of coaching our umpires receive. However there is also pride in the number of former players that give back to the game they love by taking a turn with the whistle.
All VAFA clubs are expected to provide umpires and unfortunately those stocks have fallen in the past few seasons.
So if you are a former player looking to keep fit, learn a new skill and stay involved in the game or you are a young up and coming umpire that wants to get better in a great environment then why not give umpiring in the VAFA a go.
To find our more about VAFA umpire training times and dates in 2015 and how you can fast track your development then please contact Brian Goodman on 0408 338 098  or email [email protected].
Have a great Christmas and New Year and we will see you all in 2015.