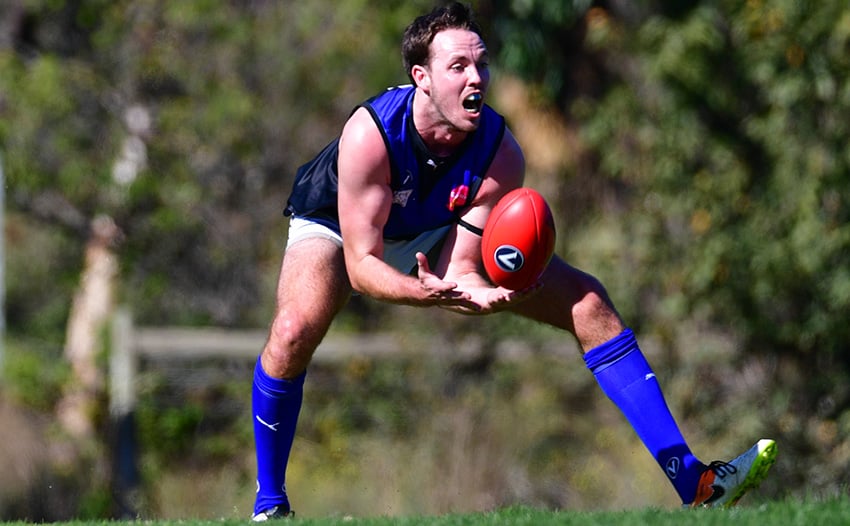 Cordy, Blues treating every game like ‘life or death’

University Blues went to work during the off-season and came up trumps with their recruiting drive when they secured former Western Bulldogs big man, Ayce Cordy.

Cordy, who is a Woodrow fancy after an outstanding start to his Amateur career, spent five years on the Bulldogs list where he played 27 games; including, the 2014 VFL grand final loss to the Box Hill Hawks before a stint with Williamstown in the VFL.

His older brother was a former Blues player and Ayce has further connections with the club after spending time studying at the Uni before he was drafted into the AFL.

Speaking on the For the Love of the Game podcast, Cordy has been impressed with the standard of the VAFA.

“It’s been a nice change; the competition is probably a step down in speed and physicality but certainly there’s no step down in the way the blokes go about it and the passion they play with,” he said.

“The way the ball can move and how good the skills are, I’ve certainly been impressed with how good of a standard it is. I’m really enjoying the year and the way the whole VAFA competition is run, I feel like a lot of people are playing footy for the right reasons.”

It’s been a mixed bag of results for Uni Blues after 13 rounds of the season with five wins, seven losses and a draw against Old Trinity. However, they remain just one game behind the T’s in fourth spot and a position in another finals series is not beyond them.

When analysing the year, Cordy described it as “interesting”.

“I’ve never seen anything like it. We’ve been thereabouts in third and fourth quarters, we’ve had lapses defensively and haven’t been able to stem the flow.”

The Blues have won six of 13 fourth quarters and going into their biggest game of the season on the weekend, they had been outscored by 103 points during the final term. On Saturday, it was a different story altogether as they pieced together their strongest performance of the season against SKOB with Cordy himself a standout in the ruck, kicking four goals in a BOG performance.

“It was the first time we’ve put together four quarters of effort,” Cordy said.

“We’ve got the pieces and putting it together and I think we finally did that, it was something we’ve been aiming towards.”

The run home for the Blues starts with this weekend’s match against the ladder-leading Collegians before facing off with Old Xaverians, St Bede’s/Mentone Tigers, Old Melburnians and Old Scotch.

How does a side who’s made the preliminary final and fallen short three years in a row attack their run home?

Ayce gave his opinion on how the Blues will approach the “grind” of winter.

“Looking forward we’ve just got to keep taking every game like it is life or death and it is our season is on the line,” he said.

“Our best is more than good enough. Any team that sees us in the finals, if we do make the finals, would be not too comfortable which is a good place to be but we still have to get there.”

Listen to the full interview HERE or download via iTunes.