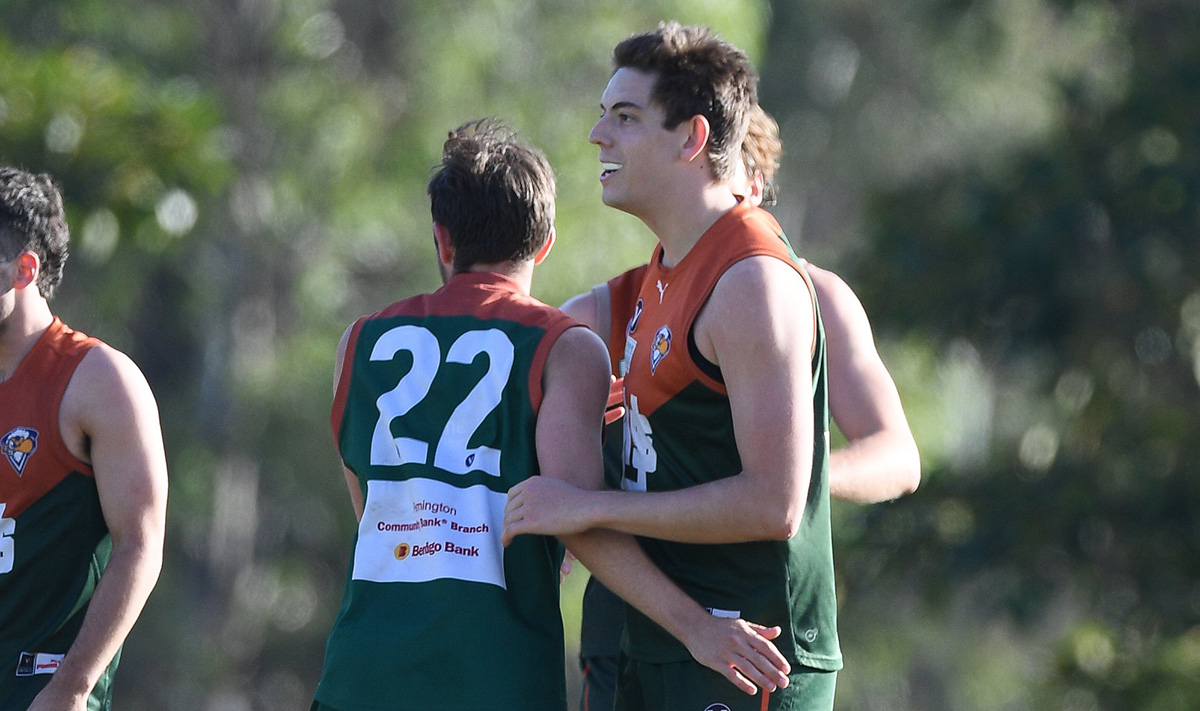 Football in September at its climactic best. Thanks to a Lucas Czajko goal after the siren in extra-time, UHS-VU have advanced to the Division 1 Grand Final with a heart-stopping victory over Peninsula, securing promotion for the third year in a row and setting up a promoter’s dream clash with Preston Bullants. Despite not leading at all between the sirens all afternoon, and inaccuracy in-front of the big sticks cruelling their continued effort (10.21), the Vultures somehow managed to escape with one of the biggest victories in the club’s history by three-points. The Pirates continued their scorching form early as they launched out of the gates to grab a four-goal lead at the opening break, and despite being beaten around the ball in the second and third terms, Peninsula’s ability to convert in-front of goal was enough to see them hold a slim four-point lead entering the final quarter. A James Dimattina major with 50 seconds to go in the fourth brought the Vultures all the way back to level footing with the Pirates, and as the siren blew to end the fourth quarter, extra time was needed to separate the two sides. Enter Lucas Czajko. Trailing by three with the siren sounding and the ball in his hands 35 meters out directly in-front, the youngster kicked truly to erupt the green and brown army at Waverley Oval. Dimattina, Brandon Jackson and Tom Waters each kicked two apiece while Charles Jackson was named best afield for UHS in just his ninth game for the side. Josh Goudge and Shaun Payze kicked three each for Peninsula while Ash Collins was named his sides best in a result that ends what was a gallant run to September.

Thanks to Czajko’s heroics, the Vultures will now progress to their third consecutive Grand Final appearance where they will face off with the almighty Preston for the Division 1 Premiership. Combined, the two sides have progressed through the VAFA’s Division competitions seven times since 2013, with Preston claiming flags in 13’, 14’ and 16’, and Uni High the last two seasons elevating them from D3 to Premier C in 2020. After brushing aside the Vultures a fortnight ago at Elsternwick Park in Semi-Final 2, and entering on a 12-game winning streak dating all the way back to mid-May, the Bullants will enter firm favourites to secure their fourth flag in their short history since joining the VAFA in 2011. Recent matchups is also on Prestons side, as they hold a 5-0 record against the Vultures, including 3-0 in 2019.

Jack Sammartino has been the thorn in UHS side up forward with 11 goals from their three clashes this year, while Tom Hill has booted eight to create a two-headed monster. Despite coming up against the likes of James King and the Calcedo brothers, the Vultures deep midfield led by Ben Dimattina and Esubalew Ramsay can more than match it with Preston. Will the Bullants make it four flags in seven years or will the Vultures right their wrongs, ride the wave of momentum and achieve threepeat glory? Make sure to keep a close eye on this one as the Division 1 season reaches it’s climax.