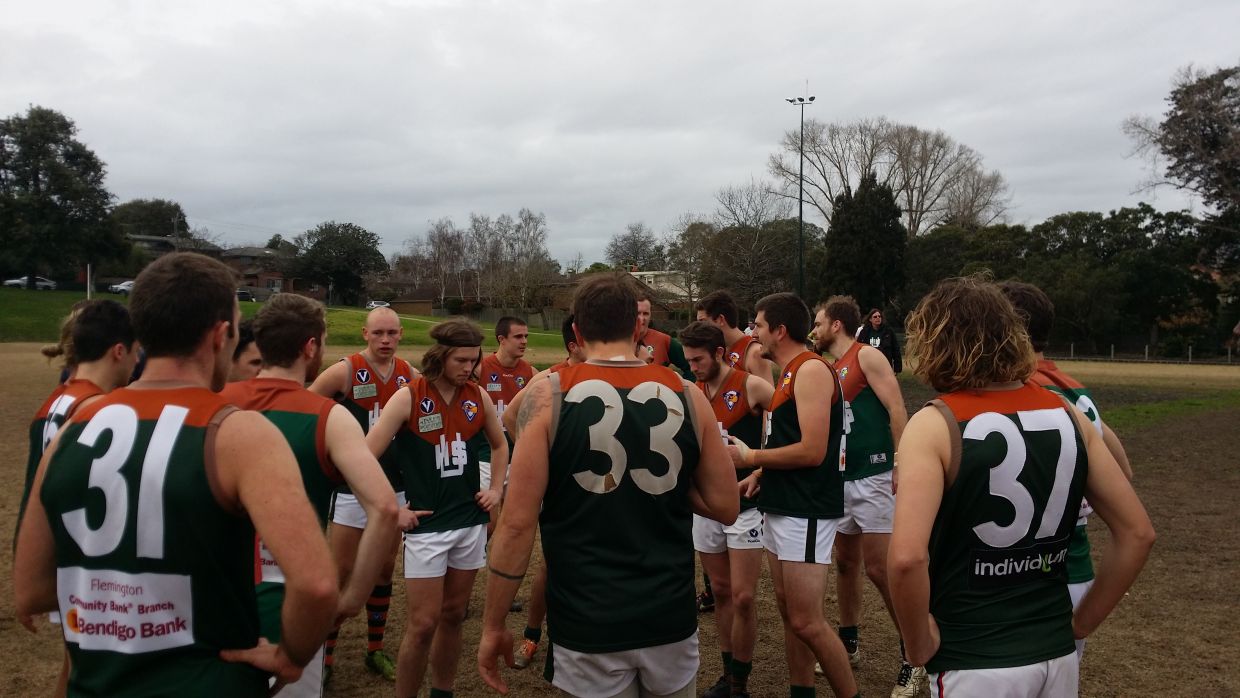 Some one-sided affairs have hurt the bottom sides and the in form Swinburne side has overtaken UHS-Vu for 5th. It’s been a couple of weeks but my 5/5 tipping was an easy one. Just the three rounds to go. To the games:

This was always going to be a tough day at the office for La Trobe. The Animals controlled the game from start to finish with La Trobe down by 6 goals at quarter time and slowly increased their lead every quarter. La Trobe seemed to get better linking together during the game but they were simply outclassed by the rampaging Animals, going down by 102 points. For the Animals, the forwards were lining up. Ryan Harding (6 goals), Chris Beluszar (5), whilst inspirational Captain Paul Baranello (3 goals) was best on in his 200th game.  Mitchell Pearson seemed to be the lone gun with 4 for La Trobe. Stephen Leitch and Elliott Kelly were the students’ best.

In a tightly contested match for both teams, this was a “must win” for the Albert Park Falcons to retain any hope of playing finals footy. Some inaccurate kicking from both teams saw the 1st quarter evening contested. The 2nd quarter saw the Falcons slam on 4 quick goals with relentless running through the midfield a highlight. Down by as many as 23, Tom Kennedy got Swinny back into the game with 3 goals just before half time. The third was a seesawing affair , which saw 3 lead changes, and Swinny went into the last up by 4. BOG Ben Higgins continued his great form in the last, kicking 3 Daicos-like goals for a tally of 5 for the day. The Falcons had no multiple goal scorers, however Justin Mahoney played his best game for the year.

The Magpies went to Packer Reserve to take on the Saints. The Saints chose their strongest side but they were down three men by quarter time. West Brunswick had a stranglehold on the contest all day. A 3 goal third term is the only thing the Saints could hold their hat on as the Magpies again kicked inaccurately with 17-35 (unsure how many were rushed). Such a score line has presented a minor concern for the Magpies as they hope to build toward a second straight elevation. William Dillon and Scott Hulm led the Magpies with 3 goals each and Cormac Cashin was named best-on. Todd Richardson being best for the Saints.

A very important win for the Hawks at home, sews up a finals birth and leaves the Vultures on shaky ground. It was a tough battle for the contested footy in the 1st quarter and a half before the ‘Derricks’ (Sam Gold, Steve Gunn, Dave Pritchard and Dave Kennedy) started dominating the midfield. Their delivery was outstanding and Jack ‘Sauce’ Ince took full advantage, slotting 6 majors from 12 marks. Devan Healey and Lachlan Chapman were also fantastic all day and helped set up a dominant second half.  For the Vultures, Luke Temming (3 goals) and Tom O’Halloran (2) were the only multiple goal kickers, scoured by limited entries. Nick Rowland was the Vultures best.

Although only one game clear of potential relegation, Power House is technically in their best form of the year. Despite taking on one of the top 3 in Aquinas, they had nothing to lose. Power House won 2 of the 4 quarters and exposed the Bloods in their own game at times. A match for the marking forwards despite the dewy conditions was the highlight. Power House’s Luke Stubbs was man of the match, booting 5 goals. Best for Aquinas was Phil Jurkovsky. Patrick O’Leary and Jai Perrett led the Bloods with 4 each.

With 3 games to go, ladder positions should stay expect possibly the bottom. The run home looks like this (my tips in bold):

1st – Emmaus St. Leo’s: AQ Bye WB 2 tough wins and a bye will see them on top and primed for finals.

2nd – West Brunswick: SU ESL AQ Wins at home against SU/AQ and a loss to ESL away. Their biggest worry is their goal kicking.

4th – Hawthorn: Games against GE, EP and LTU. Won’t be as easy as you would expect.

5th – Swinburne: Loss to WB, Percentage will save them from 6th, bar the must win with Uhs-Vu then win over PH.

6th – Uhs-Vu: Playing LTU, SU and GE. It’s possible to lose all 3. Knowing what’s at stake, should save them.

7th – Glen Eira: 1 game out. Percentage, a loss to Haw, could be what stops them. A win over PH, then they face UHS-VU.