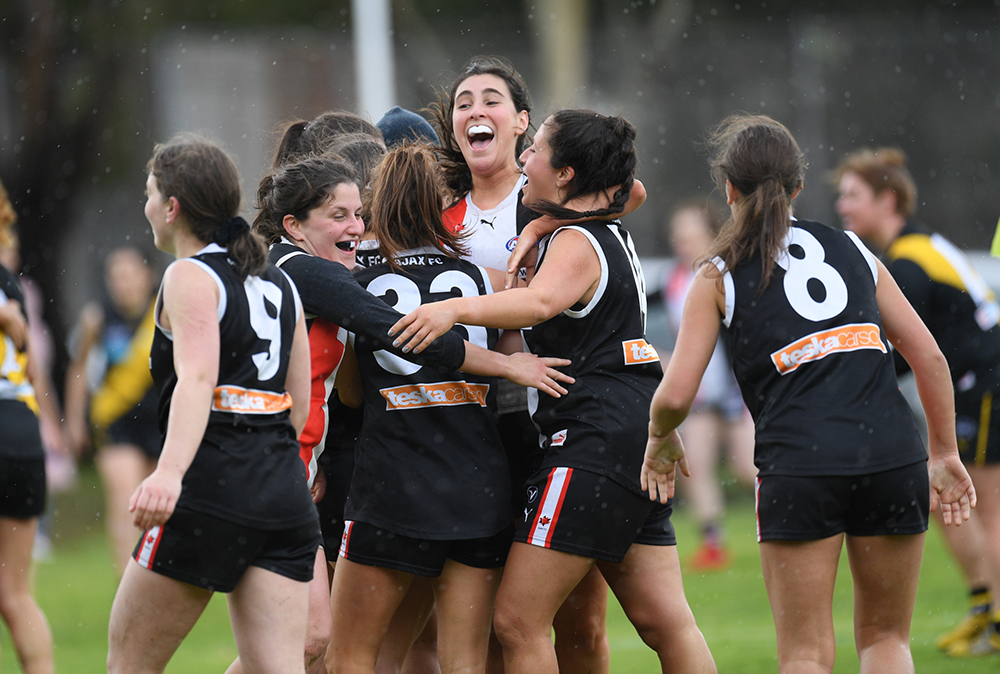 After just falling short in the 2019 Division 4 Grand Final, AJAX have an exciting opportunity to challenge themselves in 2021. 2019 Division 4 leading goal kicker Jessica Israel will again cause headaches for defenders and proven stars Maddy Smart, Daniella Abraham and Lindi Nankin shape as key players. Expect AJAX to be a tough team to come up against week in week out.

Narrowly missing out on finals in 2019, Bulleen Templestowe will have a point to prove this year. There will be plenty of optimism for their season ahead, as Zoe Rudden and Jacqui Krienke will look to build on their strong form in 2019, and some promising juniors from Yarra Junior Football League find their way to Bulleen Templestowe for their first exposure to senior football. A finals campaign will be in their sights for season 2021.

Undoubtedly Emmaus St Leo’s would have been disappointed with their 2019 campaign. However, their affiliation with Deakin University, along with some strong recruiting from junior leagues, provides an opportunity to bounce back. Experienced campaigners Danielle Burden, Shannon Harris and Sheridan Harris will help the development of some fresh young faces in a season where Emmaus can take large strides forward in their development.

Glen Eira will be looking to make a strong start after their Division 4 flag in 2019. Off the back of a perfect season, which included a competition best & fairest and a best on ground effort in a winning grand final team, Big V Representative Maddy Lister will again lead from the front. Vice-Captain Isabel Quintal will be a big loss, and 9 premiership players have moved on, but a mix of smart recruiting and the continual development of young players such as Callie Georgiadis and Freya Parker make for an exciting year ahead for the Gryphons.

After a Grand Final loss 2019, Hampton Rovers would have been keen to go one step further in 2020. A raft of list changes since means a new look team will take the field in 2021. Emily Johnson and Jasmina Andros are valuable acquisitions alongside plenty of young talent making the leap from underage footy to the seniors. This makes for an exciting new mix of youth and experience. A team to watch this year and one of the main contenders.

It was a solid effort in week 1 of finals in 2019 for Oakleigh, taking it right up to ladder leaders Hampton Rovers. However, missing the opportunity to rectify their early finals exit in 2020, expect Oakleigh to start the year strong. Second in the competition best & fairest in 2019, Jasmine Ballestrin is a star of this Oakleigh outfit and will be a key figure in their push for success. She will need support from players like Jordyn Bethune and Maggie Minchin. A chance to go deep into finals.

2019 held a bit of everything for the Power House girls. Narrow defeats, narrow wins as well as some heavy losses means they will be determined to find some consistency in 2021. There was no better example of what consistency can look like than the efforts of Lisa-Marie McCombs in 2019, named in the best 11 out of 12 matches. Down a grade and maintaining key personnel, there is no reason why Power House can’t be there at the business end of the season.

Perhaps the most interesting proposition in season 2021, South Melbourne Districts have found a new home in Division 3. Falling from Premier C due to a major list overhaul and a new coach, there is plenty of work ahead for season 2021 and beyond. Cheree Peters is a huge loss as she heads over to Caulfield Grammarians. However, an exciting opportunity to rebuild and set the foundations for future success means South Melbourne have a high ceiling in 2021.