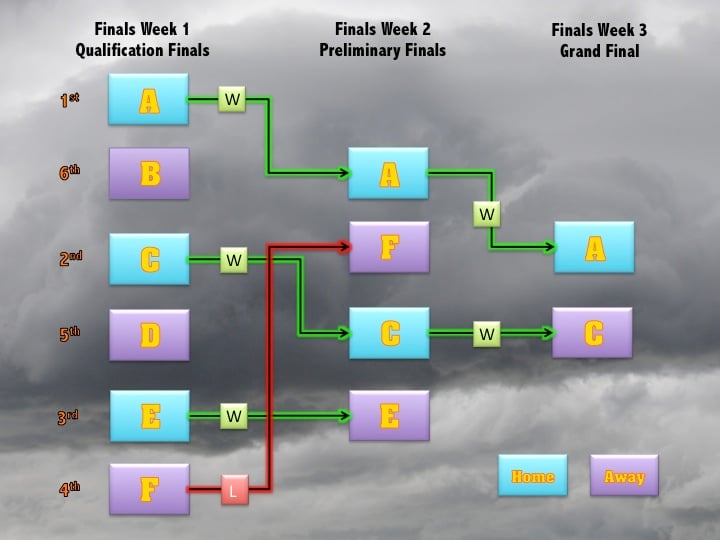 In 2013 the Division 3 & 4 finals series will be based on a final six model.  The decision for the final six to be implemented was made at the end of 2012 after the success of the trial in the Club XVIII competition last year. The final six will give an extra opportunity to a team in Division 3 and an extra two teams from Division 4 the chance to play finals. These sections have become more competitive down the ladder as more teams are still chasing finals berths.
To help explain how this will work in 2013, each week will be as follows:
Week 1:
There will be three finals with the following matches ranked according to the ladder at the conclusion of the home and away season.  The matches will be as follows:
1 v 6
2 v 5
3 v 4
Week 2:
At the conclusion of week one of the finals, the three winners and the highest ranked loser will progress to the preliminary finals.  The teams will be ranked in the following order:
1st Highest Ranked Winner
2nd Second Highest Ranked Winner
3rd Third Highest Ranked Winner
4th Highest Ranked Loser
Preliminary Final 1: 1st v 4th
Preliminary Final 2: 2nd v 3rd
Week 3:
The Grand Final will be between the two winners of the Preliminary finals.  The home team will be the highest ranked winner from the Preliminary Final.
The new system means that only the side that finished on top will be guaranteed a double chance, thus ensuring there is true reward for the side that finished on top.
A final six also means that no team holds a specific advantage of a week’s rest coming into the Grand Final.
With eight teams still fighting it out for six spots in Division 3 and seven teams trying to find their way into six spots in Division 4, the next five weeks will have more riding on them than perhaps there has been in the past.