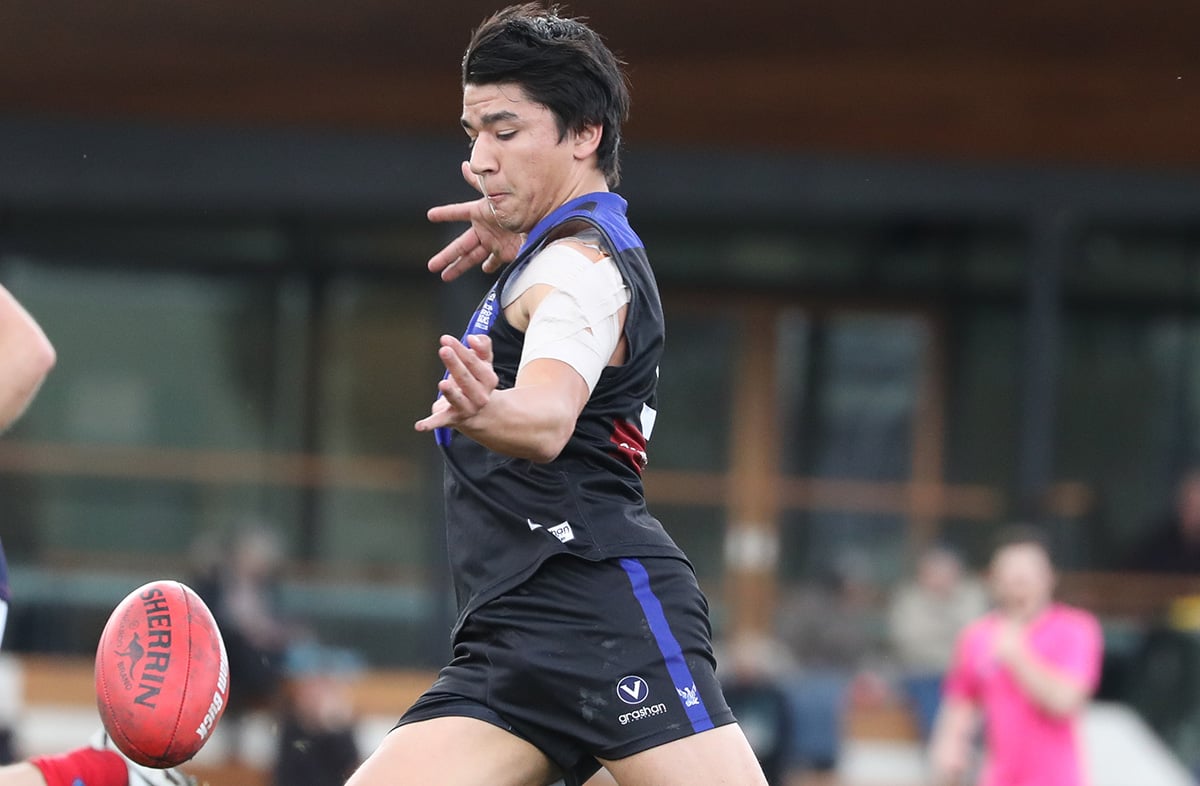 In a clash featuring the two perennial powerhouses of Premer B, did we expect anything less? With  little separating them all afternoon, it was Caulfield Grammarians who came out on top as they survived an Old Scotch final quarter fightback by a solitary point to advance to the second last Saturday in September, while also qualifying for William Buck Premier for the first time since 2012. Following a Julian Dobosz set-shot from the boundary that gave Caufield a game-high 15-point lead midway through the final term, a crumbing effort from goal sneak Josh Halsall and a captain’s major from Gene Van Den Broek saw the Cards crawl all the way back to a one-point deficit with under two-minutes remaining. A crucial clearance won by Jack Wallace sent the ball into the Fields forward 50 from where his side were able to hold on, booking their first Premier B Grand Final tickets since 2011. Nathan Page and Julian Dobosz each kicked three, with Dobosz booting two instrumental final-quarter majors, while Nathan Peterson, Page and Lachie Stephens were given the votes on a memorable day for the club that earns them the week off. Scotch were gallant in defeat, exchanging blows with Caulfield all day and never lying down despite falling behind late. Ben Hays, Josh Halsall and Gene Van Den Broek each kicked two while on-baller Jack Bull was named his sides best. The Cards will lick their wounds and return this Saturday for a mouth-watering preliminary final clash with University Blacks.

Returning to the Premier B Preliminary Final stage after falling short in 2018 will be University Blacks after they proved too strong for Beaumaris, running out convincing 82-point victors. Following a Harrison Edwards goal at the 10-minute mark of the opening term that gave Beaumaris an early 6-point lead, the Blacks would proceed to kick the next 12 goals of the match, leaving the Sharks without a major after quarter time to steamroll through to their ninth win in a row and another Preliminary Final. Jordan Quaile was the question the Sharks had no answer for, with the small forward thriving in the wet conditions, booting a career-high five goals. Charlie Richardson and Daniel McCollough also bobbed up for two apiece, while Bede Mahon and Samuel Bennett received the votes in the win. Beaumaris’ gallant season ends on a rough note, simply outclassed by the level of competition their opponents possess. Matt Petering and Harrison Edwards were their only goal-scorers on the day, while Lewis Diggins was judged their best. The youth and inexperience this side has would have learned some valuable lessons in 2019, and no doubt it’ll be used in good stead when Beaumaris return to Premier B for another crack in 2020.

A true flip of the coin. Along with Caulfield, these two outfits have been as close to elite as you can possibly be, taking Premier B all before them and earning their rightful spot in a do-or-die clash to return to William Buck Premier. Since 2011, these two sides have faced off nine times, with seven of them coming in Premier grade, and one of them in a final in 2013 in which the Uni Blacks won by 19 points. The Blacks hold the head-to-head lead 5-4, with their most recent victory coming in Round 13 this year by 26 points. Scotch also grabbed a victory earlier in the year when they defended their fortress to run out 32-point winners in Round 7. Scotch enter this clash averaging just under 100 points per game while conceding just 57, while the Blacks average 99ppg and hold teams to a league best 51.6 points per contest.

The Premier B version of Gawn vs Grundy. Josh Steadman and Tom Downie going head-to-head in the ruck will be a sight to see.

How will Scotch counteract Blacks stifling defensive unit? Chris Carson, Morgan Fawcett and company have held the stingiest defensive unit together this year, will Josh Halsall and Tom Downie be able to kick a winning score?