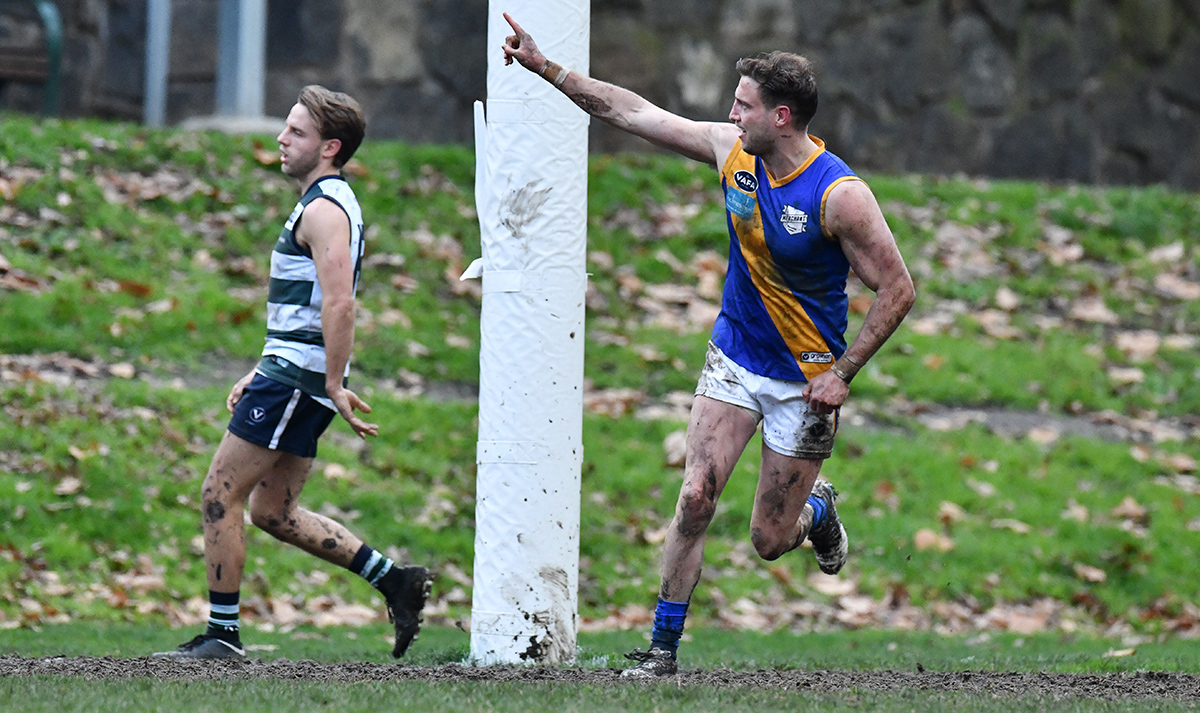 Handy points in Premier B

Match-winning behinds, streaks reach double-figures and a bag of five delivers the victory.

In one of the more spectacular endings so far this season, a Michael Graham bomb from 50m in the dying minutes has gifted Parkdale the handiest points, leading to an improbable victory over St Bedes/Mentone Tigers. A Nathan Smith major at the 28-minute mark drew the Tigers level, but a beautiful slingshot from the SBMT forward pocket launched the Vultures into attack, leading to Graham registering his match-winning behind. Unlikely hero Zach Straker booted four while Dylan Glascott chipped in with three, as ruckman Jarrod Peake was judged best-afield for Parkdale. Nathan Smith kicked four for the Tigers while Tom Tyquin was named best for his role in the midfield. The win keeps the Vultures in 6th, just a game out of fourth, while SBMT, whose four-game winning streak was snapped, hang onto 4th spot by percentage only.

The premiership favourites continued their run towards September, making it a perfect 10/10 on the year as Caulfield Grammarians downed an inaccurate University Blacks by 30 points. A cold and muddy affair held the usually high-scoring sides to their lowest point-totals so far this year, with the Blacks managing just 40-points on the afternoon, their lowest output since Round 3 in 2015. Inaccuracy killed Cam Roberts’ men, as they finished with five more scoring shots than their counterparts, but kicked seven less goals. Julian Dobosz bagged himself another three while Nick Baltas was adjudged best-on as he kicked three majors as well. League-leading goal-kicker Daniel McCollough was held to just one goal while running mate Lachlan Huntington was named his sides best. The victory keeps the Fields a game clear on top while the Blacks hang onto third, but only a game clear of the Tigers and Sharks.

Like the Uni Blacks, Beaumaris’ day in-front of the big sticks left a lot to be desired, but ultimately it didn’t cost them as they downed a disappointing Old Geelong by 28 points. Managing 26 scoring shots to their opponents 13, the Sharks had this game by the scruff of the neck from the outset, with the 28-point margin arguably flattering the OGs. Brent Lynch booted five of his sides nine on the day as he dominated up forward, while Scott Gower was named BOG for his role in defence, limiting OGs captain Cal Wood to just one major for the afternoon. George Chisholm and Will Sloss were given the votes for Old Geelong on an otherwise dark and gloomy day at Como Park, with their side now dropping five of their last six games to fall well behind the finals bound pack. The Sharks win sees them move into equal fourth on the table, trailing SBMT by just percentage.

After a disappointing start to the season, Fitzroy are seemingly starting to turn a corner and produce results, lifting themselves off the bottom of the ladder in the process. Their 16-point victory over Monash Blues in Round 10 was their third on the year, and second in their last three games; some positives that Luke Mahoney’s men can really gravitate to. A six-goal-to-two second term was what blew the game open for the Roys, as they grabbed a 17-point lead heading into the main break, a lead they’d never relinquish. Ted Clayton was named best-afield as he booted three while second gamer Sunny Brazier also bagged a triple, following on from his bag of four last weekend. Zac Ledin and Nick Petering were the only multiple goal-scorers for the Blues while Macgregor Cameron was named the Blues best.

Our final match of Round 10 saw Old Scotch outclass Old Haileybury by 66 points. Scotch put on a defensive masterclass in this clash, restricting the Bloods ball-use and limiting their ability to go forward, holding their opponents goalless in the second and third term, and with just two majors up until 3QT. Tom Downie was everywhere in this one as he bagged four for the afternoon in a BOG performance, while Will Carrington chipped in with three. Jack Munro was the shining light for Haileybury as he kicked two and held his own against their superior opponent. Scotch remain in second, just a game behind Caulfield, while the Bloods sit in 8th after dropping four of their last five.