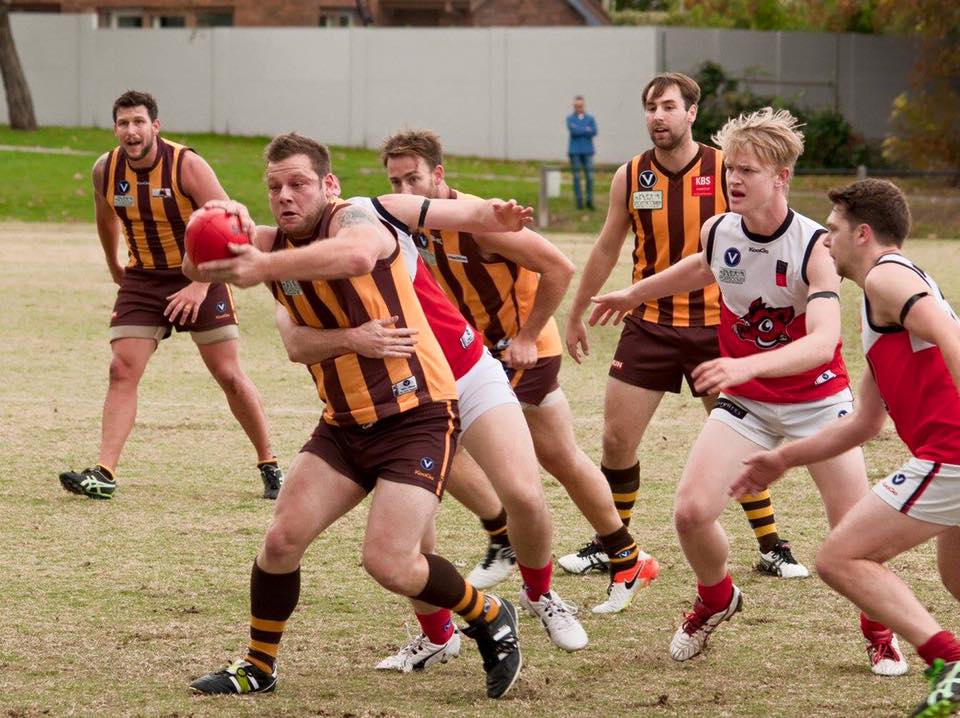 It was a heart-stopping round in Division 3 as our two league leaders had games that went down to the wire. Hawthorn fought back against Swinny in a 1-point thriller at St. James Park. It wasn’t all simple for our league leader either as Glen Eira escaped Ross Gregory Oval with a hard fought win. While La Trobe continue to impressive as they record their eighth straight win. Lets check out the games…

It was a second half blitz by the Canterybury Cobras that saw them defeat Aquinas by 31 points, 109-78, at Canterbury Sportsground. The Cobras booted 10 goals after the half-time break while the Bloods could only muster five majors in reply and the misery continues as Aquinas falls to their seventh straight loss. Thomas Lowden was the man of the match kicking four goals, while Jeremy Price was on fire upfront adding five goals of his own. Billy O’Loughlin tried all day for the Bloods en route to foul goals but it wasn’t enough. The Cobras now sit in sixth position on the ladder with the victory but now face the daunting task of facing Glen Eira at Packer Reserve next week.

It is now eight straight wins for La Trobe as they used a complete team effort with ten individual goal-kickers to dominate Elsternwick by 48 points, 129-81. After a surprisingly close first half where the teams were only separated by three points, it was La Trobe who kicked away in the second half to record the win. Mitch Gleeson was a star with six goals as he improves to 49 on the season and increases his lead in the goal-kicking race to nine in the process. La Trobe’s Ryan McMinn was the best on ground, while Scott Grace replied with four goals for the Wickers in the defeat. La Trobe will look to make it nine straight as they host Parkside next week. The Wickers will look to end their four game losing streak against the Hawks.

South Melbourne dominated every facet of their match-up with Albert Park as they ran out 38-point winners, 101-63, at Beaurepaire Pavilion. Steve Clarke was the man of the match for the Swans, Jordan Heis and Zephyr Howson each kicked three goals in the victory. Kirk Murray tried all day for the Falcons who have now lost three straight games and are sliding down the standings as we move into the second half of the season. Meanwhile the Swans are discovering some good form and currently sit fourth on the ladder after their second straight win, and with a match-up with the besieged Aquinas next week, the winning feeling should continue.

The Vultures were dominant in their 76-point drubbing of the Red Devils, 128-52, at Pitcher Park. An impressive defensive clinic was the key to the victory for UHS-VU holding Parkside to only 12 scoring shots including only 8 majors, while piling on 33 scoring shots and 19 goals of their own in the win. Nick Devereux was incredible kicking seven goals, the leading goal-kicker of the round in Division 3, in the victory Sandor Guggisberg was the best on ground. Michael Muir was valiant in the defeat for the Red Devils who also got two goals from Matthew Ross. The Vultures now winners of three straight will need this same defensive effort when they host a tough Swinburne squad in Round 13.

Inaccurate kicking may have cost Power House from causing the biggest surprise of the year as they fell to Glen Eira by a narrow 7-point margin, 69-62, at Ross Gregory Oval. Trailing by 25 points at the half-time break, Power House had only recorded two goals from 12 scoring shots to fall behind but it was a third quarter five goal effort that catapulted them back into the game. However in the fourth the Saints usual unflappable defence stood up to the challenge and held off the charging Power House for the victory. Familiar names stood up when Glen Eira needed them most with Adrian Flowerday leading the way and Julius Waras Carstensen added two goals in the win. Adam Collett was best for Power House who have now lost three straight but can take positives from pushing the undefeated Glen Eira right to the edge as they look to get back into the finals race over the next few weeks.

In the game of the round Hawthorn used a stellar final quarter to rally back and stun the Swinburne Razorbacks by a single point, 102-101, in an instant classic at St. James Park. In an enthralling contest that was tight throughout the Razorbacks pulled away in the premiership quarter kicking five goals to hold an 11-point lead heading into the final term but they remained in striking distance of the Division’s most potent offence to make a comeback. For in the final period the Hawks rebounded to kick five goals of their own to steal the victory and break the hearts of the Swinburne faithful in the process. Russell White was the man of the match, while four Hawks each booted two goals. Jackson Manning tried all day for Swinny who even though they recorded the lost deserve to hold their heads high after that performance. What a game!

With only six rounds left then every game is becoming crucial to see whose season will be extending into September and whose season will be coming to a close. After several mid-table teams like Power House and Swinburne pushed our league leaders to the absolute limit then anything is possible in these final few weeks. La Trobe, Glen Eira, Hawthorn and South Melbourne should all cruise to wins. Where the interesting games will be the contests between UHS-VU vs Swinny, and Albert Park vs Power House, with all four still battling for the final three Finals spots then a loss here could spell the end of their September dreams.