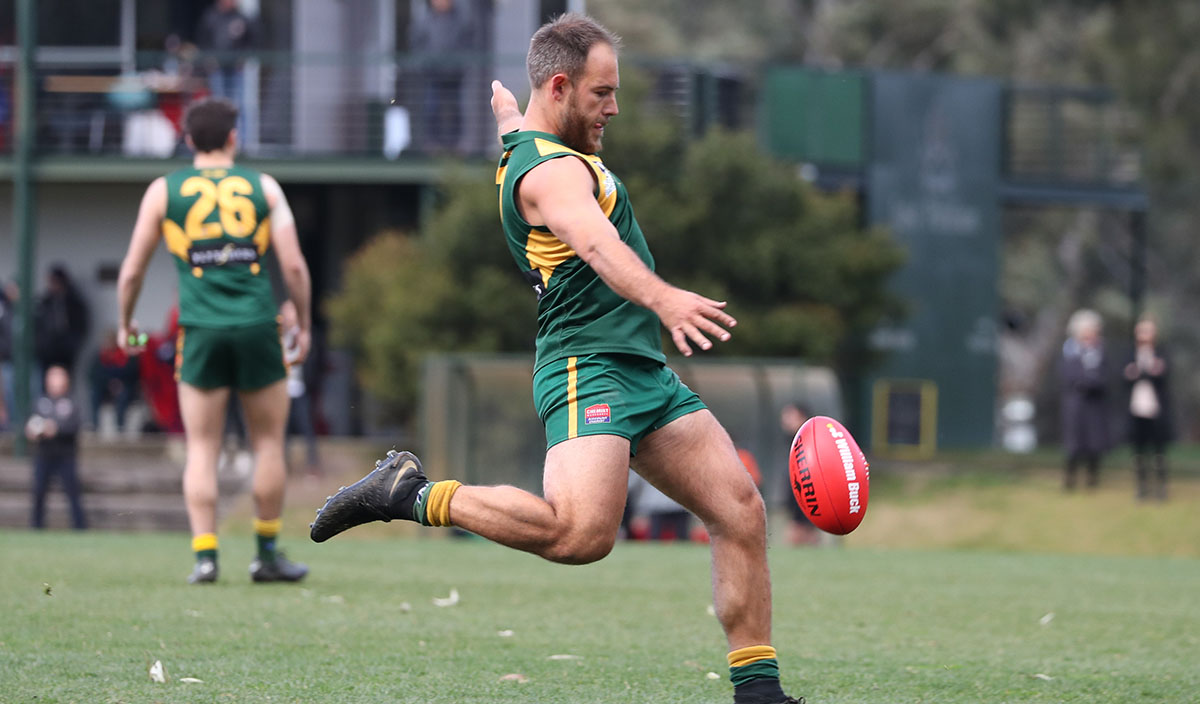 The 2018 William Buck Premier finals series will mark the final campaign for Brendan Iezzi after the Old Trinity and VAFA champion announced his retirement last night.

Taking to Facebook earlier today, the T’s informed the wider community of Iezzi’s plan to hang up the boots at season’s end and touched on the immeasurable influence he has had on both the club and Association.

“Brendan’s impact on OT football and the VAFA over 13 seasons is unquestioned and it’s only appropriate that over the next month (fingers crossed) we get a chance to celebrate one of the great careers,” the post said.

Iezzi’s resume is littered with individual accolades; including two Woodrow medals, two Moore medals and numerous Big V appearances at both B-D4 and senior level. He formed part of the successful 2015 Big V Metro Championships side and was a key influence in last year’s record-breaking victory over AFL Victoria Country.

As senior captain and spiritual leader for several years, Iezzi teamed up with Luke Pacconi last season as co-coach following the resignation of Adam Andrews in July.

The one significant achievement eluding Iezzi’s incredible career with his beloved T’s is that evasive William Buck Premier flag. After falling short in 2015 (St Bernard’s) and 2016 (Old Xaverians), the premiership window looked to have closed for the T’s when they slumped to seventh spot with just six wins last year. However, the senior side has undergone a resurgence with Bernie Dinneen at the helm this season and a fairy tale ending for one of the VAFA’s most decorated stars is a distinct possibility.

Speaking with the boys on this week’s FTLOTG Podcast, Iezzi believes the team is in fact stronger than it was when it went down to Xavs in the 2016 decider due to a host of inclusions and internal improvement.

“Steinhart obviously didn’t play in the 2016 finals series with his knee, Ned Hunt didn’t play at all – you pop those two people in there nicely,” he said.

“Then you’ve got people like Seb (Nicolosi) who have just gone to a ridiculous level this year, he’d be very high in our B&F, and even the consistency of Ben Howell compared to previous years has just been unbelievable.”

Since returning to Trinity as a full-time senior player after giving away his VFL duties with Richmond this season, Anthony Scott has been one of the most devastating players in the competition.

“He’s just a beautiful player to watch and very much like Harry (Tinney) you sort of just know if the ball’s near him you feel like he’s going to win it and he’s going to do something really, really special with it,” Iezzi said.

“(I’m) super confident in the players we have, and I even think this team would beat our 2016 side.”

Iezzi returned for his first senior game since Round 5 over the weekend and looks primed for an assault on the club’s first-ever William Buck Premier flag in September.

It will take a supreme effort to overcome Collegians, St Kevin’s OB and Old Brighton in this year’s finals series, but if there’s one man who can make it happen, it is Brendan Iezzi.