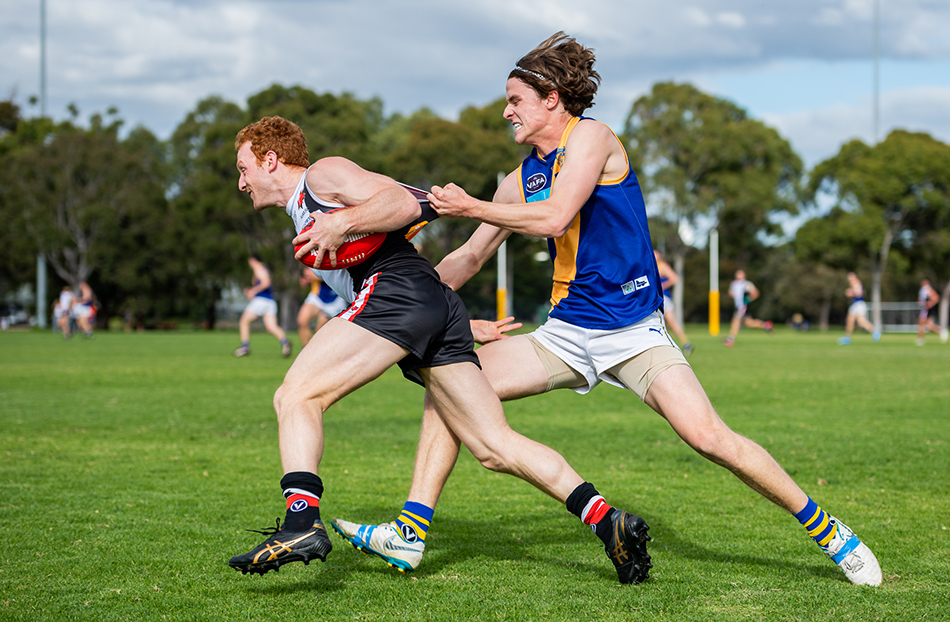 Piling on 35 scoring shots to 10 in their Round 5 win over of Parkdale, the University Blacks will not find sailing so smooth in this top-of-the-table collision with the red-hot Old Haileyburians at Uni Oval. Sitting pretty on top of the table unbeaten after five rounds, the Blackers possess an average winning margin of just under six goals, with their 65-point thumping of the Vultures on the weekend boosting that average mightily. James Sansom (4), Harrie Lahy (3) and Lachlan Knight (3) were the key contributors up forward while Brendan Dess was outstanding in the middle of the ground, gathering his first BOG since returning to the club. Following their victory over Fitzroy, Haileybury has now won four on the trot by an average of 52 points. Durras Seccull, Emilio Bitters and Dino Karamoshos were the standouts from the weekend. This clash bolsters a league-best front six in Haileybury headlined by Seccull and Samuel Loewe going against the second-best defensive unit in the competition, with Uni restricting their opponents to just 49-points a game. In what promises to be a gruelling contest, all eyes will be on Uni Oval for a potential Grand Final preview.

After a scorching start to the year, Beaumaris has dropped back-to-back games and are looking a little shaky entering their round six clash with Fitzroy at Banksia Reserve. Missing the likes of Jak Nardino and Matt Petering have not helped the Sharkies in their last fortnight, with their scoring prowess drying up immensely, falling from 103-points in rounds one-to-three to just over 46 the last two contests. Outworked and outclassed by a hungry De La on the weekend, Chris Grigoriadis and Riley Mihailovic combined for four of their sides six majors on the day, while Scott Gower was judged best afield. Despite failing to register a score in the first term, a gallant Fitzroy outscored their opponents after quarter time to keep close with a strong Haileybury outfit, going down by 18-points in a match they can take a lot from. Jack McKay dobbed three while Ted Clayton and Jacob Long were named the Roys’ best. Led by Lewis Diggins, the Sharks concede a league best 44-points per contest, a mark that should sway the match in Beaumaris’ favour. The Roys’ will fight like they always do, but this classy Sharks outfit should get the job done.

A tough first five weeks of scheduling for De La Salle saw them face the three best sides in the competition in Uni Blacks, Haileybury and Beaumaris, but as the schedule begins to look more friendly, De La’s quest for a return to William Buck Premier could begin to look more achievable. Beginning this weekend, fellow former Premier counterpart Old Carey will enter the confines of Waverley Oval. De La were incredibly impressive in their round five demolition job of the highly touted Sharks, piling on five goals in the opening term to run out convincing 42-point victors. Adrian Indovino and Brodie McLaughlin both kicked three apiece while Fraser Cameron and Ryan O’Meara showed out at home. Despite winning back-to-back games and entering their round five clash with some confidence, the Panthers ultimately fell flat against Bedes’, going down by 35-points. Wade Brusnahan kicked three and Riley Thompson was named his sides’ best. Two sides that have been relatively even to start the year statistically, the main difference is Carey’s struggles to put points on the board, averaging just 59-points a contest. Outside of Harrison Bean, the Panthers will need another to stand up and put their name on the scoresheet if their any shot of upsetting a rising De La.

Trailing by a point with just a few seconds remaining, a fantastic hit-out by Richie Simon into the path of a streaking Nicholas Cohen led to a game-winning toe-poke from inside the goal square, elevating AJAX to their most satisfying and important victory this year by downing the CYs by five points. An arduous journey to Brindisi Street now awaits the Jackas as they face a tough St Bedes/Mentone Tigers who themselves are fresh off a strong victory over Carey. The Tigers used a third quarter blitz to cruise past the Panthers, turning an eight-point deficit into a 36-point lead heading into the final change. Matt Caia had himself a day-out with a bag of five while star Josh Cowan was instrumental in swinging the result in their favour. The Jackas, like Carey, have had trouble putting points on the board this year, averaging just 54-points per contest this year, while Bedes’ have been better at 77-points a match, leaning heavily into the narrative, can the Jackas momentum from round five carry them to a win this weekend? We shall see.

Finally, Williamstown CYMS, who had their victory stolen in the final seconds, will look to get back on track and return to a potential top-4 spot as they welcome the winless Parkdale Vultures to Fearon Reserve. As stated above, a last gasp toe-poke from AJAX was the difference as the CYs dropped their third game on the year. Mitchell Knight kicked three and Felix Sutter was named their best in a result that needs a serious response to get back on track. The Vultures continue to struggle in Premier B, remaining winless so far this year and holding an average losing margin of 87-points. Cooper Balic, Ryan Macdermid and Josh Ricco helped keep them within striking distance until a second-half avalanche from a classy Blackers outfit put the result beyond doubt. Like most weeks, look for internal growth and youth development from the Vultures as they look to remain competitive for four-quarters against quality opposition, while the CYs should get the job done.