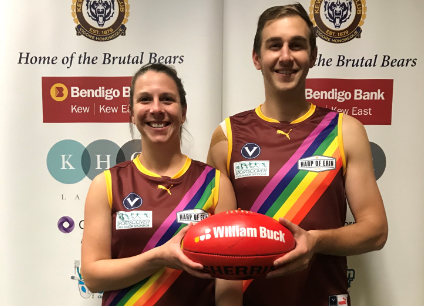 This weekend marks the first-ever ‘Pride Match’ for Kew Football Club as they promote equality and inclusiveness ahead of their senior men’s and women’s matches against West Brunswick and Melbourne University, respectively.

The senior playing groups will wear specifically-designed rainbow-coloured guernseys while the club will hold a charity lunch (Pride Lunch) in the social rooms as part of the day.

The initiative will raise funds for Stand Up Events, a not for profit organisation challenging sexual and gender discrimination in Australian sport, via the auctioning of the player jumpers post-match.

Kew secretary, Josh O’Bryan, said the club was “very proud of the initiative and proud of being a community organisation that stands for equality and inclusiveness”.

Details for the purchasing of tickets can be found on Kew’s Facebook page.

It will all kick off on Thursday night when Kew premiership player, Carter O’Regan, and LGBTI and mental health advocate, Jason Ball, speak about their experiences in a special event at the club rooms.