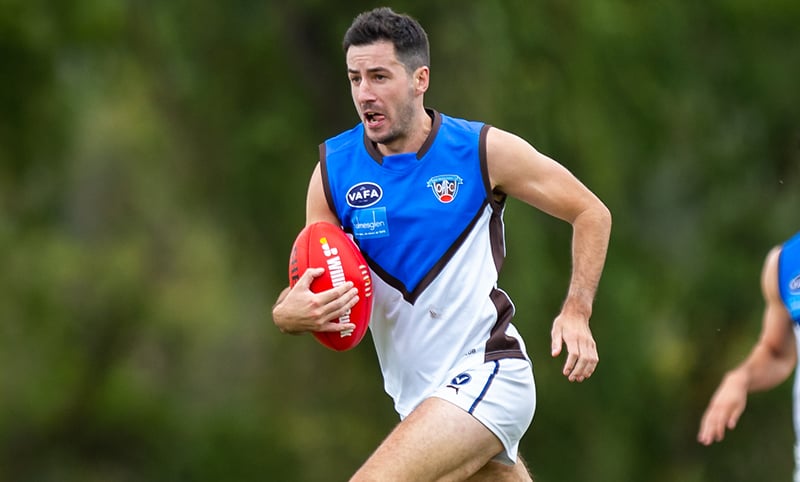 Avoiding relegation just became that much harder for UHS-VU as they went down to Marcellin by 37 points at Brens Oval. Marcellin started strong with seven scoring shots to three, but inaccuracy allowed the Vultures to turn it on in the second and head into half time with a five-point lead. With the wind, the third quarter was all Marcellin who kept UHS-VU scoreless while piling on 6.3 themselves. UHS-VU were unable to claw their way back in the fourth and as a result, may all but have sealed their fate in the Premier sections as they are now two games away from the 8th spot. James McGee was the Vultures’ best. For Marcellin, big Daniel McMahon found some form up forward kicking four, while utility Jerimiah Antypas kicked five en route to a best on ground performance. UHS-VU will host Old Mentone this week, and every game from here is a must win. The Vultures were comfortably beaten in their first matchup, is there something still left in the tank? Marcellin travel to Central Reserve to face Mazenod who will be looking to move back into the four after a tough loss.

Old Ivanhoe made it five on the trot as they were able to hold out Hampton by 25 points at home. The Rovers jumped the Hoers early, behind the great ruck display of Benji Audige and Christian Carnovale in the middle. Hampton’s 34-point lead quickly deteriorated when the Hoers flicked the switch in the second kicking four goals to none. A tight third saw no one able to break away, but the great play of Harry Frazer, big man Luke Velluto and star mid Jake Bradley was enough for Old Ivanhoe to dominate the fourth kicking 5.4 to Hampton’s 2.1 to take the four points home. Defender turned forward Joel Melnjak kicked three and was Hampton’s best. The Rovers were 2nd after five rounds but having now lost five straight are right back in the pack. They will host Ormond this week who will be seeking revenge after being blown out when the two teams faced earlier in the year. Old Ivanhoe travel to Preston which may provide a great opportunity for the Hoers to boost their percentage in such a tight competition.

Old Geelong solidified their spot in second place with an impressive 12-point win against the red hot Mazenod. The two form teams of the competition really struggled in front of goal this week, and I mean really struggled. A windy day down at Central Reserve had Old Geelong up by two points after kicking 2.10 to Mazenod’s 2.8. The heavy ground provided for plenty of contested football, but in the third, it was the class of Tom Warby off half back that had the Nodders enter the final break with a 15-pointlead. Though in the end, with the wind, the Oggers were able to ride a five-goal to one last quarter home to make it four straight wins. Ruckman Jack Sheridan continued his stellar form with a best on ground performance, while Christian Hatzis proved once again that no matter the team he will put up big numbers (27 goals for the year – four on the day). The Oggers will face their ultimate test when they travel to Monash who will be determined to get back on the winners’ list. Mazenod will host Marcellin, and if their round 2 matchup is any indication (Mazenod won by four points in a thriller), this game could go either way.

Our match of the round came out of E.E. Gunn Reserve, where Ormond broke Monash’s undefeated streak walking away three-point winners. It was blowing a gale down at the Gunn, and it proved impossible to score at the pavilion end. All 17 goals were scored at one end of the field, and it made for an entertaining and strategic matchup. The first half saw both teams have their moments, but it was the third which saw Ormond kick six behind the great play of Matthew Hine (who kicked two in that quarter himself). The Monders went into ‘protect the lead’ mode entering the fourth against the wind, and while the first 10 minutes were heavily contested, the Blues kicked four in relatively quick succession cutting the lead down to within a goal. Two shots in front of goal in the final two minutes went astray for Monash who could not quite take the lead despite their best efforts. The Cosgriff boys were elite in defence for Monash taking intercept mark after intercept mark, while the usual suspects Daniel Easson and Nick Argento (who kicked three) were great. For the Monders, Jack McCartney and Max Kennedy were contested ball-winning and tackling monsters all day. Ormond has entered the break in the four and will face Hampton this week in what promises to be a high flowing, high paced game. Monash’s run does not get any easier because Old Geelong may smell blood this week now it has been proved that Monash can, in fact, be beaten.

In our final match, Old Mentone annihilated Preston by 95 points at Keysborough Playing Fields. Looking at the final score, you would not know that this game was quite competitive in the first half. While the Panthers certainly had more opportunities, the Bullants hung with them every step of the way and only entered the half down by two goals. The second half (or the Angus Grant show), however, was a different story. Grant piled on goals en route to eight on the day while Old Mentone kicked 14.7 to 1.3 in the second half to run away comfortable winners and grab some very handy percentage points. Sean Calcedo found form on the day for Preston who has the tough task of hosting a red-hot Old Ivanhoe team this week. Old Mentone will look to keep the gravy train rolling when they travel to play UHS-VU.