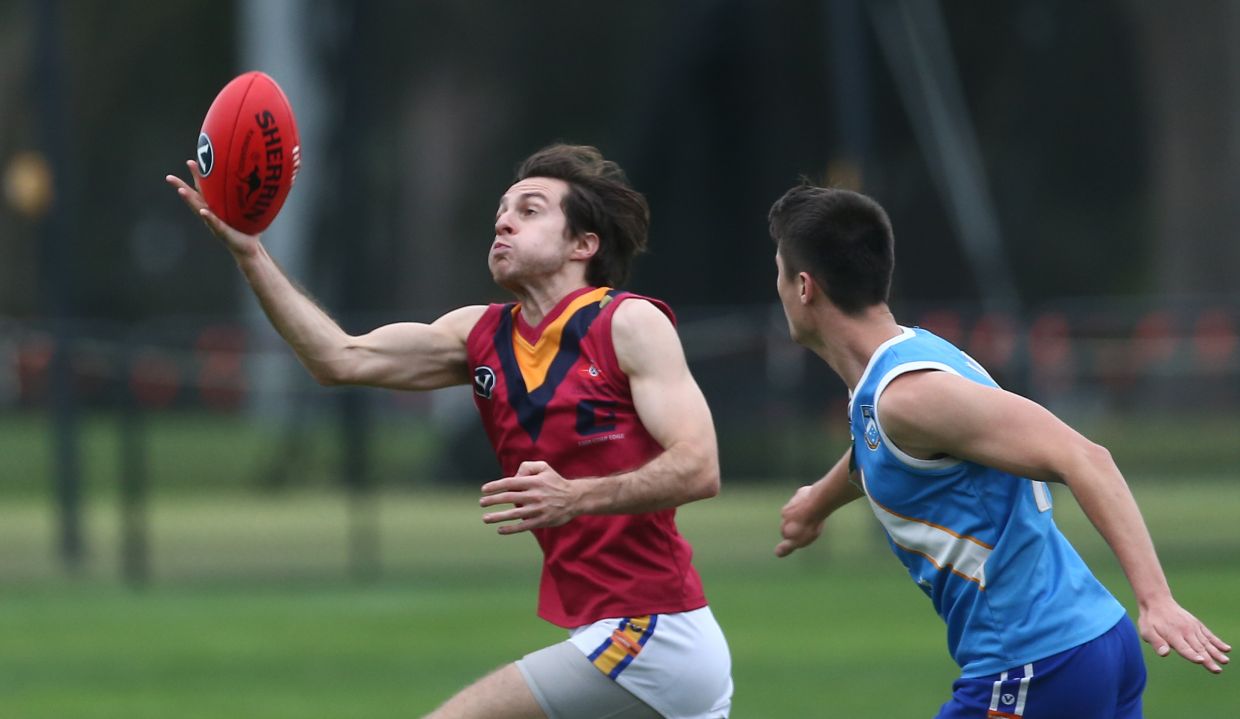 Newcomers all over Premier B

The Premier B ladder has been taken over by the newcomers, with Old Scotch, Beaumaris and Old Haileybury occupying the top three positions on the ladder after Round 2. St Bede’s/Mentone Tigers makes up the four despite being rolled by Old Brighton, while Ajax had an impressive second half, allowing them to run away from the Rovers at home.

The Vultures held a two-point lead over the Sharks in a relatively low scoring first half but the game opened up in the third quarter, with both teams basically doubling their half time score. The Vultures got on the board first seven minutes in, while Tom Simpkin quickly replied for Beaumaris after being set up by Will Edmonds. It was goal-for-goal as Kurt Lopo marked uncontested and converted successfully for the Vultures, then Shark Josh Ward finished off some good gut running through the middle of the ground. Jason Bristow goaled off the pack then Matt Lovejoy pounced on a loose ball and finished for Beaumaris. Jesse Waters kicked truly for the Vultures after being the recipient of a holding free kick, then Beaumaris finally managed to string together two goals in a row through Stephen Milne and Simpkin, who completed a clever soccer goal in the goal square after a marking contest. Parkdale scored the last two goals of the quarter; Lopo finished off some great work from teammate Josh Manning, who laid the perfect tackle and was rewarded, while Nathan Peterson fired in a long set shot through the uprights to give Parkdale a seven point lead heading into the last quarter. However, it was all Beaumaris in the final stanza, finishing with eight goals to two including three to Stephen Milne and two to Drew Kelly.

St Bede’s/Mentone Tigers started their season off in fine form, with an 85-point win over Fitzroy, while Old Brighton were overrun by the Bloods. The Tigers started better, opening up a 20-point lead at the first break. However, the Tonners broke the game open with a seven-goal-to-one second term and never looked back. Nick Coroneos set the tone with a clever tap to Tom Fisher in the goal square. The game was hard and tough early on, with lots of stoppages. A chain of Tiger handballs ended up with Brett Denton who kicked long to Mitch Coen for the Tigers first and only goal for the quarter. Michael Karayannis was lively all day, kicking four goals. He made the Tigers pay for their mistakes, kicking the last one of the quarter after the Tigers defender failed to rush it through and he picked it up and snapped truly over his shoulder. Brock Rawlinson had a big quarter with three goals for the Tonners. Carrying the momentum into the second half, the Tonners led the whole way through, finishing with a ten-goal second half to run out with a four-goal win.

Ajax hosted the Hampton Rovers, with both teams looking to get on the winners list after going down in Round 1. The Jackas opened up a nice lead after a five goal first term, but the Rovers did the same in the second, bringing the margin back to seven points in favour of the home side at the main break. Four Ajax goals to none in the third set up the game, and the Rovers needed to produce something special. They started the final term well, kicking the first two goals inside the first three minutes through Sam Bradford and Nathan Smith. Ajax squandered a couple of chances before Alex Wollan gathered a loose ball and snapped their first. Nick Lewis kicked to Geoff Measey on the lead. His set shot fell short but Richie Simon pounced in the goal square and put it through. Dean Rotenberg and Warren Steinberg both converted from set shots, then Jarryd Ludski got the ball to David Fayman who turned side-on, Stevie-J style, and slotted it through. Measey and Fayman both scored majors before Smith got himself a free kick from a throw-in and converted a late consolation goal for the Rovers.

Monash Blues would be cursing their luck, having to face the two Premier-relegated sides in the first two weeks. Just like the previous week against Beaumaris, the Blues started well, matching the Cardinals in a tight opening term. Old Scotch opened up the game, kicking four goals to two in each of the middle quarters, giving themselves a 35 point lead at the final break. Jonathan Daggian opened the scoring for the Cardinals, then Tom Havers finished up on the end of a chain of errors by both sides. His kick just cleared the pack on the goal line for the Cardinals second. Daggian kicked two more for the Cardinals before the Blues replied with two of their own through Andre Headberry and Nick Petering, both from strong contested marks inside 50. Callum Goldby kicked truly for the Cardinals after a handball over the top from Daggian and Headberry kicked his fourth for the Blues after another strong contested mark.

Fitzroy was looking to bounce back after being trounced by the Tigers in Round 1 and came up against Old Haileybury, who started their Premier B campaign by rolling over the top of Old Brighton. It was a rather dull and unpleasant day, but the atmosphere at Brunswick Street always lifts the spirits. The game was tight early on, with the Roys going into half time with a five point buffer in a low-scoring contest. Five goals to three in the third term extended the Roys lead and the passionate Redders fans were expectant. The quarter began with two behinds each, before Peter Shakallis marked from a Fitzroy backline error and kicked truly. Six minutes of scoreless footy later, a long kick inside 50 by Joseph Fisscher found Corey Connelly who converted the Bloods second for the quarter. A few minutes later Ed Limon found himself in front of goal and kicked another one for the Bloods, putting them in front. Connelly kicked two more for the visitors who ran out with a 14-point win. Contrary to what the official scoreline says, the Roys were not scoreless in the final term, but they were goalless, managing just two behinds. Daniel Bisetto and Tom Cheshire kicked five goals between them and were among the best for Fitzroy.

Round 3 will take place over two days: On Saturday, Old Haileybury will have their good form tested when they travel to take on Beaumaris; the Rovers are looking for their first win and will host Old Brighton; Monash Blues travel to the Vultures Nest to face Parkdale. On Monday (Anzac Day), the Tigers host top-of-the-ladder Old Scotch and Ajax meets Fitzroy at Brunswick Street.