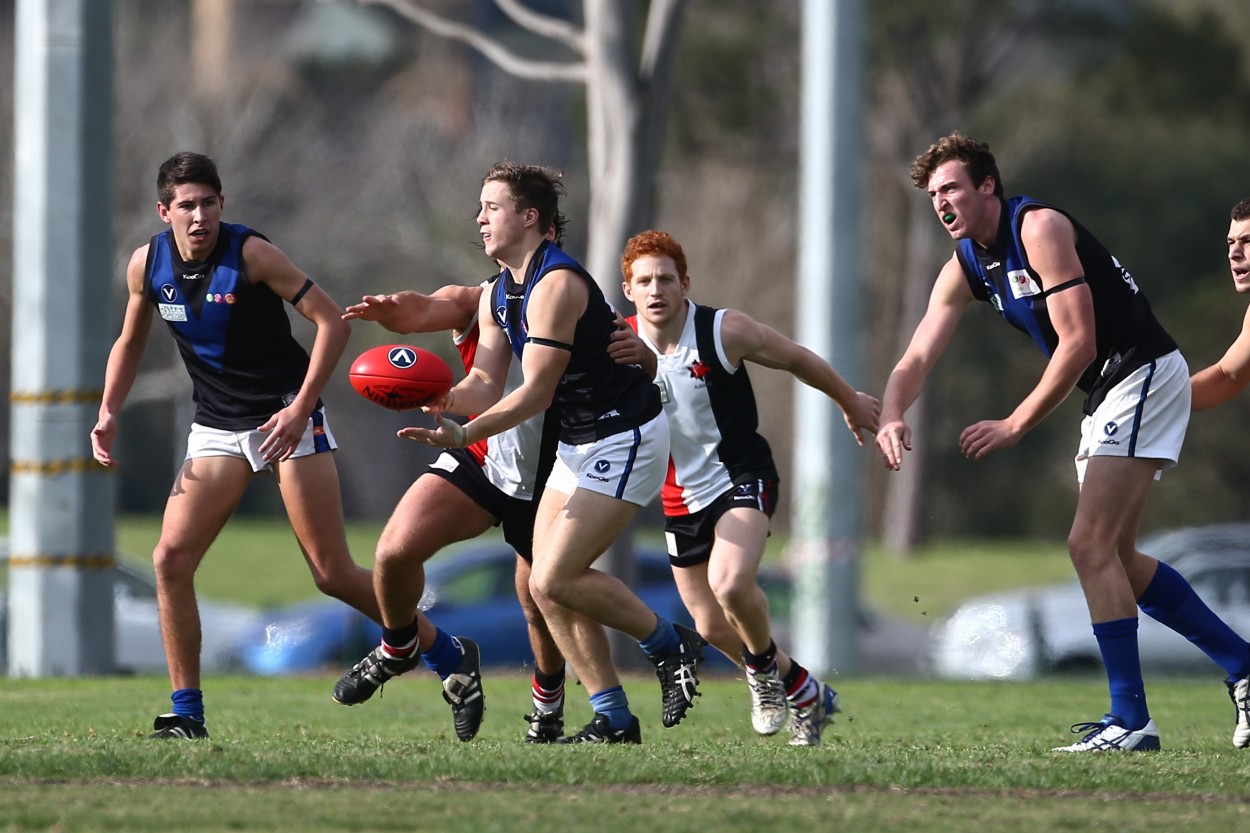 NO EASY GAMES IN THE PREMIER SECTIONS

The four teams holding the finals positions have a earned themselves a break on the rest of the section with Collegians winning for a third consecutive week to move to fifth. All of the current top four have played in Premier B in the past four seasons and of them just University Blacks played finals last year. With last year’s Grand Finalists in the bottom two, it raises the question, just who wants to win the Premier Section flag in 2014?
University Blacks have made as good a case as anyone and in a high class game against Old Trinity at Uni Oval Blacks held an edge for most of the afternoon to record a 25 point win. Blacks assume top spot having only lost once this year. Pattison kicked four goals for the Blacks whilst Weatherson kicked four in a losing side.
Beaumaris returned to the winners list with a 47 point win over Old Scotch at Banksia Reserve. Scott Gower kicked five goals as the Sharks kicked away from the Cardinals in the last quarter, their slightly better percentage has them just above Old Trinity in third.
De La Salle caused the upset of the round as they came from behind at half time to defeat the form side St Bernard’s by just one point at Dairy Bell. De La and St Bernard’s traded goals in a thrilling last quarter and the victory sees De La join Old Scotch with three wins.  St Bernard’s are second despite the loss.
Old Brighton won for the second straight week as they defeated Old Xaverians by 8 points at the Beach Oval. Matt Handley kicked his customary four goals but three to Daniel Anthony and a three goal to two final quarter saw the Tonners move a game clear of the relegation places.
Collegians slammed on eight unanswered goals in last quarter to overturn a 14 point deficit and record a 34 point win over St Bedes/Mentone Tigers. The final scoreline probably flattered the hosts, but Shura Taft’s five goals and the extra run the Lions finished with were too much for the Tigers as they join old Xaverians in the bottom two.

Premier B had it’s fair share of shock results too. None more so than Mazenod’s big win over St Kevin’s at the TH King. The Nodders lead by nine goals at half time and whilst SKOB came back throughout the second half they couldn’t stop Mazenod recording back-to-back wins by 26 points to move them out of the relegation zone.
Bottom side Old Ivanhoe also got the jump away to Fitzroy but the Roys hauled them in to lead at the final change. It seemed like the Hoes’ were destined for another heartbreaker, but they responded to win for the second time this year. The seven point margin was just rewards for Travis Ronaldson’s men. Despite the win they remain bottom.
Old Melburnians also recorded back-to-back wins for the first time this year as they handed Caulfield Grammarians an 89 point touch up on their own turf. Melburnians had 13 goal kickers in the win that amazingly moves them up to 6th, one spot ahead of Caulfield.
After last week’s performance Old Carey were probably expected to do a number on Old Haileyburians, however the Bloods had other ideas. The Panthers held a slender lead for most of the day but a Haileyburians five goal to two final quarter sent shivers through all at Old Carey. Despite the charge Carey were able to hold on for a four point win that sees them move into outright second. Meehan kicked six in a losing side whilst Laidlaw returned for the Panthers to kick five.
AJAX made Uni Blues earn their win at Gary Smorgon Oval and the final margin of 51 points favouring Blues is an unfair reflection on the Jackers. Lew’s kicked five goals for the home team, but four each to Gardiner and Hayes help the Blues stay a game clear on top.

In Premier C: Oakleigh prevented Marcellin from having a third straight 20 goal win, however the Krushers still couldn’t stop the Eagles from winning a seventh match of the year by 34 points. Millsom and McPherson both kicked three goals in Marcellin’s win, whilst Scott and Hard did likewise in a losing cause.
Hampton Rovers were back to their best in their 110 point demolition of Banyule at the Boss James. No less than 12 Rovers players kicked goals with McPherson, Clements and Pavlou all managing four majors each. Banyule continue to prop up the ladder without a win this year.
Monash Blues did what Old Carey managed last week in their huge win over PEGS. A brillian kicking display of 30.5 for the afternoon saw Blues run out 133 point winners over PEGS. The win takes Blues up to second on the table as PEGS drop to fourth. Cosgriff bagged seven goals in a standout performance, but he had 12 other Blues team mates also split the middle in the rout.
Parkdale Vultures won for a second straight week after they held off a determined Ormond by 17 points. The Vultures trade places with the Monders who drop to 9th.
Old Camberwell moved into 5th spot courtesy of their 42 point win over Peninsula. The Pirates have now dropped four games in a row to leave them squandering in 7th. Allwright kicked five goals for the victors whilst Marshall kicked six goals in a losing cause.