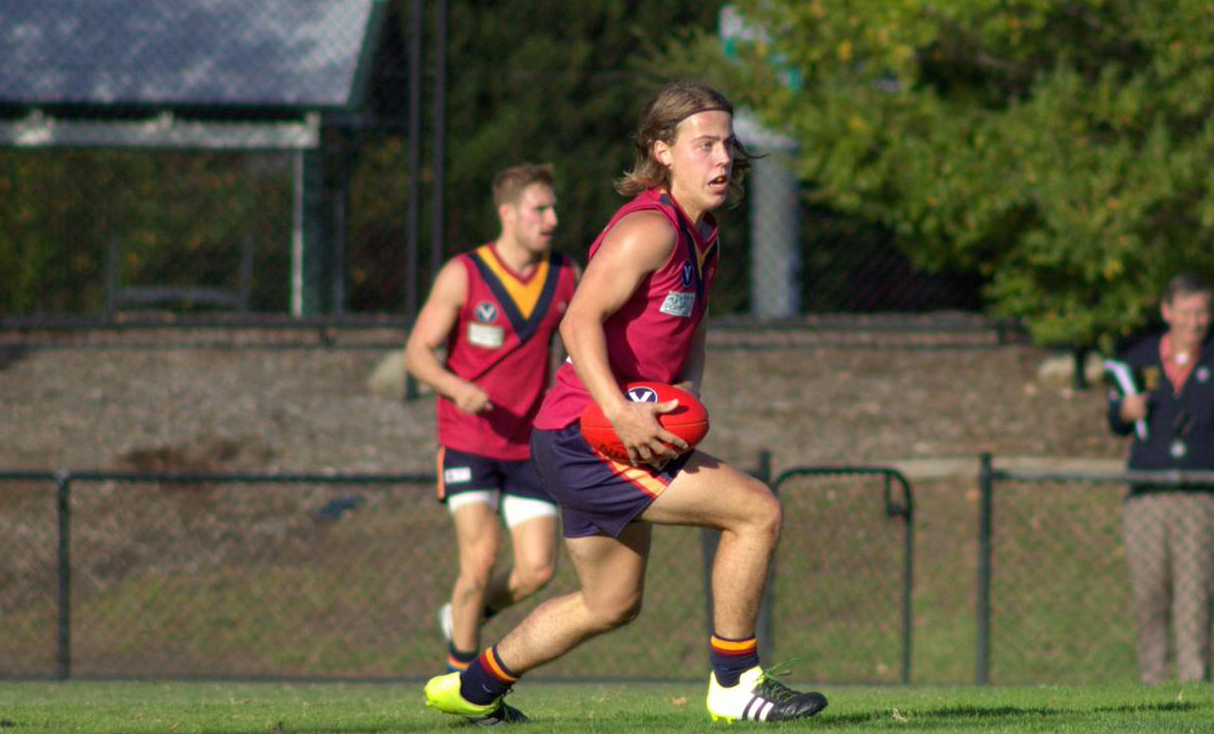 Premier B preview, 2016 Scribe Team of the Year

Congratulations to Beaumaris, St Bede’s/Mentone, Old Scotch and Monash who are the four teams through to the 2016 Premier B finals. Round 18 didn’t produce too many surprises, with the higher ranked team taking the points in four of the five matches. The exception, of course, was Monash. They faced the biggest challenge of the round, taking on then-ladder leaders St Bede’s/Mentone and needing to win to ensure a finals berth. They hung on in a four-point thriller, leaving Fitzroy out of the finals even though the Roys gave themselves every chance by notching a comfortable win over Parkdale. The Tigers loss also meant they gave up top spot, as Beaumaris ran away with a victory over Ajax. Dan Anthony (OB) and David Fayman (Ajax) finished level up the top of the league goal kicking with 46 goals. Stephen Milne (Beaumaris, 43), Nathan Smith (Hampton, 40) and Michael Barnes (St B/M, 39) rounded out the top five.

Old Brighton Grammarians finished their season in style with a convincing 49-point win over Old Haileybury. After winning just two of their first ten games, the Tonners won seven of the last eight and ended up sixth. Dan Anthony and Tom Fisher were the stars for the Tonners and spearheaded a blistering second quarter which set up the win. The Bloods lifted and kicked six in the third but Fisher and Anthony replied with one each and the Tonners went into the last quarter leading by 28 points. The Tonners didn’t let up, and Michael Karayannis chipped in with three goals. After winning three of their first four, Old Haileybury finished a disappointing Premier B season by losing 13 of their last 14 games and will contest Premier C in 2017.

Old Scotch consolidated third place and will enter the finals with confidence after posting a commanding 73-point win over the Hampton Rovers. The Cardinals took full advantage of the wind, posting eight goals in the second term and finishing the game off with nine goals. James Sansom had a day out with seven goals, while Sam Anderson finished with three. After losing five of six through the middle rounds, the Cardinals finished the season with three wins and are as good a chance as any of the other three contenders of returning to Premier section. Hampton will look to rebuild in Premier C.

After trading places with St Bede’s/Mentone throughout the final rounds, Beaumaris found themselves back on top after defeating Ajax and watching the Tigers get pipped by the Blues. Ajax failed to take advantage of the wind in the first term, but still held a two point lead at quarter time. The Sharks then kicked four goals to none in the second term, setting up a handy half time lead. Ajax fought back in the third, winning the quarter and getting within 14 points at the last break. Brandon Joel got the underdogs off to the perfect start with the first goal of the final term. From there the Sharks took control of the game, with goals from Daniel Gribbin, Matthew Petering and two from Lachlan Boyd giving them a comfortable win and finishing off an impressive season.

Fitzroy have had a much improved season, spending much of it in or just outside the top four. In the end the Roys destiny was outside their own hands, since even if they won against Parkdale they were relying on either Monash or Old Scotch losing. Daniel Bisetto kicked the opener for the Roys and Tim Boland replied soon after. Goals from Peter Baccanello, Corbin Stevic, Jack Dalton and Matthew Brown followed and the visitors had set up a handy lead. The Vultures fought back with the wind in the second term, holding the Roys scoreless, and only inaccuracy (4.7) prevented their eight-point lead from being greater. Fitzroy returned the favour in the third quarter, kicking four goals to none. Trailing by just 19 points and kicking with the wind in the last, the Vultures had an opportunity to throw a spanner in the works for Fitzroy’s finals aspirations. However the determined Roys were not to be denied, kicking three goals to two and taking away a 28-point win. It was a positive way to end the season in Rory Angiolella’s 150th game, but their joy soon turned to disappointment when they learned that Monash had upset the Tigers by four points, keeping their fourth spot and edging Fitzroy out.

Match of the Round honours definitely went to the Tigers v Blues showdown at Brindisi St. Both teams had everything to play for. The Tigers wanted top spot on the ladder, while Monash were playing for a spot in September. Both sides had won four out of five going into the clash. Monash got off to a blistering start, racing to a 34-point lead on the back of a seven goal opening term. By half time it was all square as the Tigers fought back, but the Blues had the edge in the third term, crafting an eight-point lead and setting up a massive final quarter. Both teams combined for seven goals, six of which were kicked in the first 15 minutes. A set shot from Luke Velluto was countered by Nick Woodland, who kicked truly after cleverly roving a stoppage. Erish Uthayakumar was in the action with two goals in two minutes for the Tigers. A goal to Blue Liam Darcy was answered by the Tigers and Uthayakumar had another couple of chances to put the Blues away but was unsuccessful. Darcy kicked what turned out to be the last goal of the game 23 minutes into the quarter and from there both teams could just manage behinds. Lachlan Mirams had a kick inside 50 in the last few seconds but missed his target, allowing Monash to clear the ball and hold on for the win.

The race for the Premier B premiership is wide open and I believe all four teams are a genuine chance to take The Big One. The first week of the finals see Beaumaris and St Bede’s/Mentone square off to go straight through to the Grand Final, while the winner of Old Scotch and Monash will meet the loser of that game the following week in the Preliminary. My semi-final tips are St Bede’s/Mentone and Old Scotch.