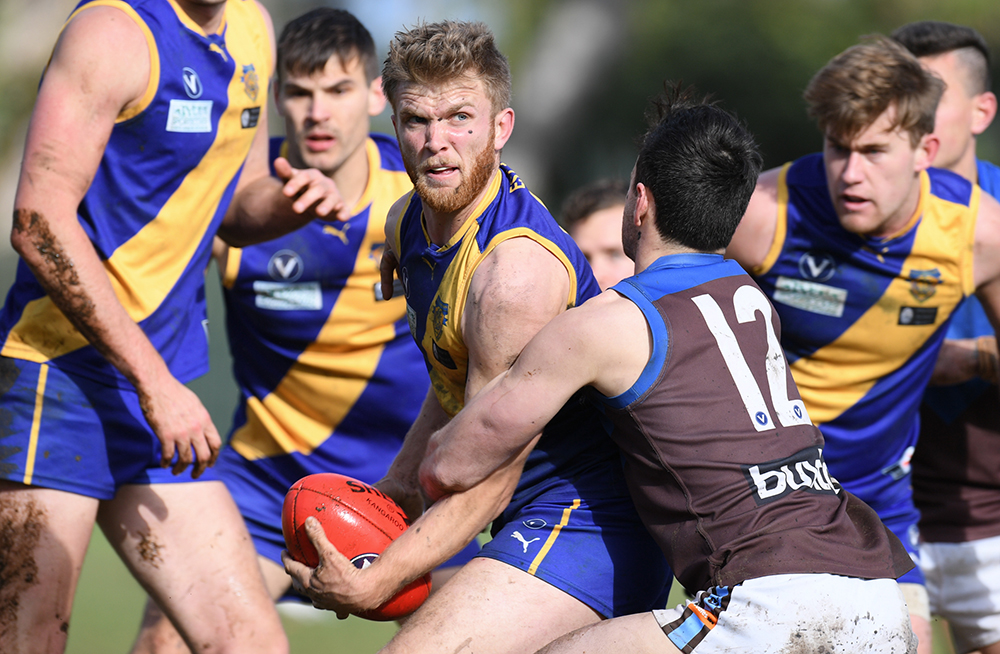 In a match where both teams were playing for pride, as neither team can make finals, Hampton Rovers secured a 24-point victory over Old Camberwell Grammarians at Boss James Reserve in Round 15. The Wellers could have been closer if their goal kicking did not let them down, they registered three goals and 11 behinds, but a goalless first half did them no favours as the Rovers led at every change. The Rovers outscored the Wellers seven goals to three, with Oliver Roberts (2) the only multiple goal scorer as the rest came from five individual goal kickers. Meanwhile, Finegan Sampson, David McColl and George Vitinaros nailed one goal each for Camberwell.

A superior performance from ladder-leaders Williamstown CYMS last weekend as they took down second-placed Ormond by 104 points at Fearon Reserve. The Monders could not get any flow into their game with the CYs showing their dominance in each and every contest, despite one ladder position separating the two teams. Surprisingly, the CYs only led by 10 points at the first break, but they took their intensity up to a whole new level in the second half kicking a massive 14 goals and keeping the Monders scoreless. Lachlan Fairley (4) and Ben Gray (3) combined with seven goals. For the Monders, their best were Ethan Hanley and Simon Buckley kicking a goal apiece in their crushing defeat.

In a top four clash, fourth-placed Ajax were the dominant side over the third-placed Old Ivanhoe Grammarians by 79 points at Gary Smorgon Oval. The Jackas stormed out of the blocks in the first half with 15 goals to the Hoers one goal, although it was a different scenario in the second half with the Hoers the stronger team with seven goals to five. An impressive defensive effort from the Jackas keeping the Hoers to eight goals for the entire match. Jordan Cohen (3), Alex Wollan (3) and Jake Lew (3) combined with nine goals for Ajax. In a losing side, the Hoers’ Luke Scuderi was among the best with three goals alongside Hamish Shepheard. The Jackas move from fifth to fourth position on the ladder and the Hoers retain third spot.

Old Mentonians put last-placed PEGS Football Club to the hammer by 70 points at Keysborough Playing Fields. The Panthers began the match strongly with five goals to the Bombers one and this powerful scoring continued for the remainder of the match, kicking 12 majors to seven. It was a team effort from the Panthers with Samuel Roberts slotting three goals and teammates Luke Hull (2), Joshua Gorman (2), Thomas Morecroft (2), Robert Tunbridge (2) and Kyle Conlon (2) combining for 10 goals. Meanwhile for the Bombers, Jarryd Rogers was impressive with three goals.

To end the weekend, seventh-placed Marcellin OC caused an upset when they accounted for Mazenod by 56 points at Marcellin College. The loss for the Nodders means they have fallen out of the top-four into fifth position. The Eagles had a slight edge on the scoreboard at quarter time with a 10-point lead, but this was the closest the Nodders were able to get as Marcellin went on to slot through 10 majors to three over the next three quarters. For the Eagles, James Baxter was prolific up forward with seven majors and teammate Adam Tomaro was also named among the best players. The Nodders had five individual goal scorers including Nicholas Pascuzzi, Corey Martino, Jarryd Raffa, David Regan and Mitchel D’Angelo.

With only two rounds left till finals, four out of the five matches were one sided. Third and fourth positions on the ladder are yet to be finalised with the Nodders and the Hoers both going down by huge margins. Therefore, there are four teams in contention to take the final two spots in the top four; Old Ivanhoe Grammarians, Ajax, Mazenod and Old Mentonians.

Williamstown CYMS have taken out the minor premiership, but an interesting clash it will be when the fifth-placed Nodders and the Jackas (4th) go head to head this round. If the Jackas have big contributions from Jordan Cohen, Alex Wollan and Jake Lew, all of whom kicked three goals last week, they could defeat the Nodders and move into potentially third if all other results go their way.

If all the teams in contention for a third or fourth spot, the Panthers will look to get back on the winners list against the ninth-placed Wellers. Also, the Wellers will need to be on their toes in defence and stop James Baxter (7 goals) if they have any chance of causing an upset.