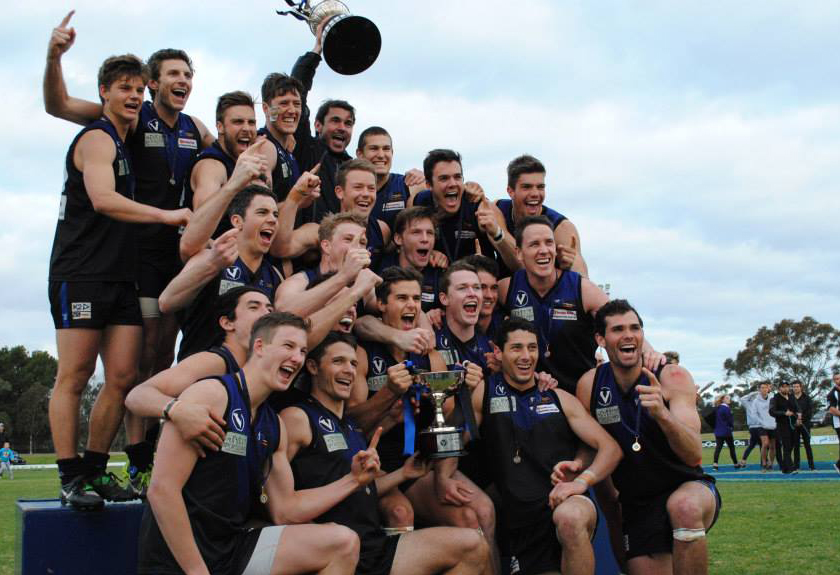 Pattison going out where it all began

University Blacks premiership player, Adam Pattison, will conclude his football career where it all began as he re-joins Old Paradians for the 2016 season.

After rupturing ligaments in his ankle during the Blacks’ Round 10 win against Old Xaverians and subsequently sitting out the remainder of the season from the sideline, Pattison took the time away from the playing field to assess his options in terms of how he would like to go out from the game.

“At that stage I was thinking about having surgery but I managed to avoid that so there was a stage where I thought I’d just retire and go into coaching,” Pattison says.

“But I spent a lot of time watching the Blacks play and watching OP play in the finals and realised I’ve still got a bit of hunger and passion to play and I don’t want to finish on that note.”

The hunger Pattison speaks of has seen him endure a storied career in Australian Rules football, having played for two AFL clubs after being drafted by Richmond with the 16th overall pick in the 2004 AFL draft.

On the back of 61 games in the yellow and black, Pattison was delisted by the Tigers before being thrown a lifeline by St Kilda in 2009 and again by Hawthorn in 2012.

Fully aware of the uncertainty often accompanying AFL football, Pattison made the decision to re-join the VAFA and run around for the University Blacks; a decision he rates as one of the best he has ever made.

“I feel like I really fell in love with footy again down at the Blacks,” he says.

“Being delisted three times in the AFL system, I wouldn’t say I was jaded so much as I was aware of the realities of professional football.

“So for me it was great just to go back and play for fun and have that really good balance between work, study and footy again and not have footy as the number one thing in my life.”

As it turned out, joining the Blacks was an inspired decision as Pattison formed part of the 2014 grand final-winning team responsible for breaking the club’s 40-year A-Section premiership draught.

“Blacks are a really special club, they’ve got a great culture and I know it’s been talked about a lot but it’s mainly their really inclusive culture,” he says.

“(Winning the premiership) is what you play footy for and my time at Richmond I didn’t see finals for a while and Northern Knights so I’d had a long break and no real finals success.

“I felt like after that I could retire a happy man.”

Ultimately, he couldn’t. Not quite yet.

Attending school at Parade College and playing juniors for St Damien’s (now St Damien’s Parade Junior Football Club), Pattison always envisaged concluding his career where it had commenced, and with the recent addition of a new family member, believes the time is now right.

“It was always going to be an ambition of mine to go back and play there,” he says.

“It sort of got to the stage where I had a baby earlier this year, I had a little boy, and just not sure how many more years I’ve got to play.

“I loved my time at the Blacks and being able to win an A-Grade flag was pretty special and I’ve got life-long mates there.

“But not knowing whether I’ve got one more year or two more years left to go, I just think now is the time and I’ve got a special connection with Parade so I’m looking forward to pulling on the green and purple jumper.”

Pattison makes the move to Old Paradians at an exciting time for the club as they look to replicate their Division 2 premiership feats in Division 1 next season.

After finishing third on the ladder at the conclusion of the home and away fixture, the Raiders went from strength to strength in the finals series, eventually defeating Ivanhoe by 15 points in the decider.

With a long list of experiences under his belt, Pattison hopes to spread his vast football knowledge and help the Raiders continue to climb the sections of the VAFA.

“I have seen clubs rise through the grades and I always thought Parade was not a D2 or D1 club,” he says.

“Over school footy, we played at St Bernard’s, St Bedes and De La and these teams so that’s kind of part of the driving force as to why I want to go back there is to step up and help the club rise back up the grades.

“Obviously, no guarantees for next year and how we go, we’ve just got to do the work.”

Pattison’s current work as the head coach for the Eastern Ranges’ U16s side, as well as the Victoria Metro midfield coach puts him in an ideal position to assist the Raiders’ young playing list while continuing his development in the coaching arena – a path he admits he would like to go down.

“We’ll see how the body goes next year and how the commitments go with doing the Eastern and the Metro stuff and see how it’s all looking, whether I’ll be playing again or whether it’s full-time coaching,” he says.

No matter how the last few years of his playing career pan out, Pattison will go out with the entire VAFA community behind him.