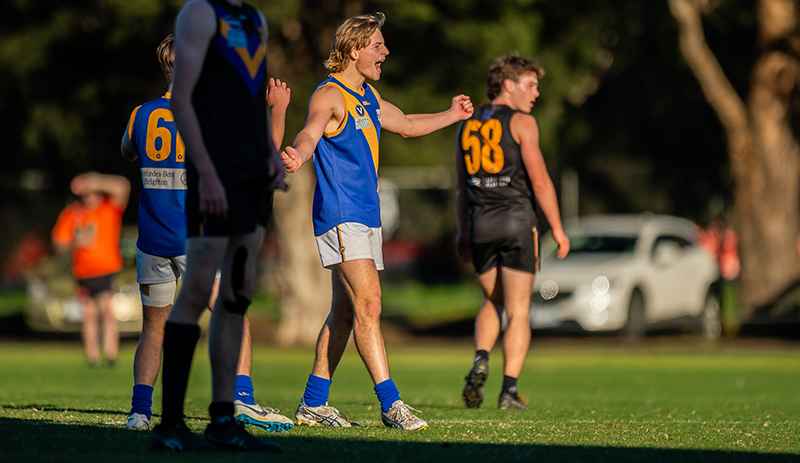 Old Haileyburians – 6-1 (Ave Score – 97, Ave Conceded – 58)
Best so far: Brede Seccull, James Paul, Emilio Bitters.
Leading goal kicker: Durras Seccull (19)
After a rough 2019, many outside the walls of Princes Park wouldn’t be surprised if the Bloods came out for another ho-hum season that saw them sit in the middle of the pack of Premier B. But after an incredible off-season that saw them draw some high-level talent inside to the club, Daniel Ward and company are rounding the corner in the box seat for a return to William Buck Premier for the first time since 2011.

University Blacks – 6-1 (Ave Score – 82, Ave Conceded – 51)
Best so far: Campbell Moorfield, James Sansom, Jack Charleston.
Leading goal kicker: Alastair Robbins (11)
The Blackers have been the bridesmaid the last two seasons, bowing out in heartbreaking fashion with close preliminary final losses, but this year, they’re in a great spot to be the bride and return to William Buck Premier after three seasons in the competitions second rung. The next five weeks for Uni come against sides outside the top-4, a perfect opportunity to potentially leapfrog Haileybury if they slip up.

Beaumaris – 5-2 (Ave Score – 84, Ave Conceded – 46)
Best so far: Chris Grigoriadis, Callum Heath, Lewis Diggins.
Leading goal kicker: Chris Grigoriadis (18)
The Sharks have had opposing sides in their vice-like grip whenever play transitions to their back-half, led by James Taylor and Cal Lineham, their back-six concedes a mere 46-points per game on average. On-top of that, Chris Grigoriadis has been one of the more prominent forwards to start the year and has had a big hand in pushing Beauy to the second-best scoring line-up in the league.

De La Salle – 5-2 (Ave Score – 81, Ave Conceded – 65)
Best so far: Fraser Cameron, Hugh Nicholson, Sean Fisher.
Leading goal kicker: Adrian Indovino (11)
Dropping two of their first three games of the year, it wasn’t looking pretty for the recently relegated De La but since, the royal blues have railed off four-straight wins with an impressive 42-point win over Beauy highlighted, proving they may be a top-4 contender to end the year. Thanks to some fortunate results, De La are now two games clear in fourth and can look to build on that with wins over the CYs and Carey in the next fortnight.

St Bedes/Mentone Tigers – 3-4 (Ave Score – 76, Ave Conceded – 71)
Best so far: Michael Barnes, Zac Calvez, James Mangoni.
Leading goal kicker: James Mangoni (20)
The last time we saw the Tigers was when they were on the wrong end of a Fitzroy match-winner, putting an abrupt end to what could have been their third straight victory and deflating what could have been the start of a serious run. Haileybury and Uni Blacks now await and even though they’ll be underdogs, they matched up relatively well in previous contests and will need to pick up some major scalps to keep tabs on the top-4.

Williamstown CYMS – 3-4 (Ave Score – 73, Ave Conceded – 73)
Best so far: Tom Johnstone, Dylan Jones, Sam Callard.
Leading goal kicker: Ryan Joy (8)
One of the newcomers to Premier B have shown they can hang with the best on a good day but also drop below their standards on another day. Knocking over De La and Bedes earlier in the year were fantastic results but with defeats against Carey and AJAX paired together, a sign of inconsistency could be rearing its head for the CYs, a trait they will need to touch up if they wish to continue their climb up the VAFA league ranks.

AJAX – 3-4 (Ave Score – 51, Ave Conceded – 74)
Best so far: Elliot Debinski, Nick Lewis, Noah Webb.
Leading goal kicker: Nick Cohen (10)
The Jackas round five win over fellow Premier C promotion partner Williamstown CYMS remains a bright light on an otherwise indifferent year for AJAX as they battle to remain competitive. The consistent struggles to put points on the board have been an issue from the outset, but their defensive line remains a positive and one they can lean on as the year progresses.

Fitzroy – 2-5 (Ave Score – 74, Ave Conceded – 78)
Best so far: Donovan Toohey, Ted Clayton, Darcy Bennett.
Leading goal kicker: Jack Hart (9)
Despite a rough start to 2021 that saw them drop four of the first five games, the three-week break which allowed some key personnel to return from injury, on-top of Donovan Toohey’s round seven heroics over the Tigers, something may be brewing for the Roys’ and a second-half of the season surge could be on the cards.

Old Carey – 2-5 (Ave Score – 59, Ave Conceded – 75)
Best so far: Ben Jepson, Tom Jepson, Zander Adam
Leading goal kicker: Harrison Bean (13)
Much like AJAX, the Panthers have struggled mightily to score, crossing the century mark just once in what has been a severely disappointing year to date. This weekend will be the perfect time to turn their year around though, as a matchup with the winless Parkdale could light a fire under Carey and launch themselves up the table, potentially moving up to fifth by rounds end if results go their way.

Parkdale Vultures – 0-7 (Ave Score – 31, Ave Conceded – 117)
Best so far: Cooper Balic, Charlie Yee, Liam Purcell
Leading goal kicker: Ryan Macdermid (8)
Much has been made of the Vultures off-season and goals entering season 2021, with the aspirations of growing through the year and using it as a lesson to stay competitive in the future. Parkdale will fight to the very end and it would not be surprising if they claim a win or two towards the end of the season, catching a couple teams sleeping.