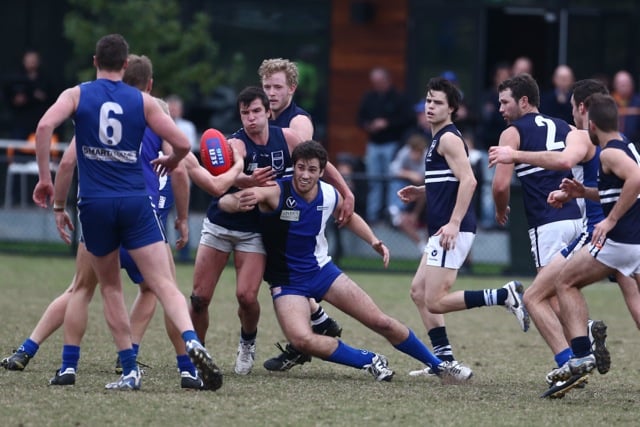 Welcome to the Premier B Season for 2015! If you believe the hype and noise out of the TH King, then St Kevin’s seem to have already penciled a spot in this year’s Grand Final. However it is harder to imagine this being a foregone conclusion and given their recent history I doubt even those in the tricolor hoops even think it’s a sure thing. Recent finals history aside, Premier B has historically been the most competitive section in the VAFA. University Blues last year were an aberration of sorts. If you look at the ladder of those sides second down to eight just four and half games separated the teams. From second to fifth was just one game with percentage defining the finals order.

Premier B is a great section of the VAFA. Many teams have made it to this level, reached striking distance of Premier, only to fall back. It is an oscillating section. Very few clubs spend too long in the section. Only the previously mentioned St Kevin’s have overstayed their welcome. This season will be their 10th straight year in Premier B. The next two longest tenants are Old Melburnians and AJAX both entering their fourth year. Interestingly the clubs that have served the longest are the teams we take most consideration of when considering who might make the jump to Premier this year.

AJAX are ready to pounce, two fifth place finishes in the past two seasons and a change of coach to Marty Pask has the Jackers primed for a foray to September. If they do win enough games to qualify, it will be the first finals campaign at this level for AJAX since 1979, when they won the B Section flag! They have some of the best players section including Moore Medal runner up Josh Ludski and the leading goalkicker in B Section for the last three years in David Fayman. Evgeni Routman returns from Old Scotch too.

Caulfield Grammarians hung on for dear life over the last two years under the tutelage of Tim O’Shaughnessy, now with the fresh voice of Wayne Oswald, the young Fields might be ready to mount something. By no means favourites, but they certainly won’t be the early season easy beats of recent seasons. Expect a ferocious attack on the ball and the man as the younger Fieldsmen have grown up.

Fitzroy are somewhat of an enigma in Premier B. Initially taking half a dozen games to win for the first time at this level in 2013. Last season they were on track to play final when they held second spot mid year for a week. The Roys fell away and were cruelled by injury. The club is strong however and have added the voice of Nick Mitchell as an assistant to Michael Pickering. This shapes as a make or break season for the club, they are within striking distance of William Buck Premier, can they take the next step?

Hampton Rovers’ rise to Premier B is the feel good story of the VAFA. If the Rovers can somehow maintain their momentum their best is good enough for an historic return to the top section of the VAFA. With a brilliant playing surface, harmonious relationship with their junior club and one of the best coaching teams in the VAFA, it seems that only injuries or themselves could curtail this run at present.

Mazenod were the great disappointment of last year. Burnt by a Premier C Grand Final loss, the players carried that anger the wrong way into the 2014 season. As a result the Nodders took too long to get going. A new voice at the top was called for and the club implemented former Docker and Nodder himself Heath Black to the top post. The off season noise has been all positive this time around and the players are keen to make amends for their poor showing last year.

Old Brighton were desperately unlucky to be relegated from Premier last year. However the fact remains that they should have won more of their games on their home patch. This season, not only do the Tonners have a pristine new playing surface to play on at the Beach oval, they also have a new man at the top. Former Melbourne player and coach Greg Hutchinson takes the reigns. The team also needs more fresh faces amongst its best players if they are to be in finals contention.

Old Melburnians, like AJAX are ready to go. No shortage of depth or class, Nathan Brown’s men are one of the key clubs that will define the Premier B year. They might not have been on the Junction Oval all summer and may face an early exit form the venue if cricket get the funding wallet opened in time, but OM’s shouldn’t let this affect their season ahead. Good players on every line, good depth, keep them in calculations.

Parkdale Vultures buck the trend of many of the other clubs in that the highly successful and much loved Sam Radford continues for a fifth straight season. More impressive about the Vultures return to Premier B second time is that Radford rejuvenated the list and took them up a stronger club, despite the fact they lost the Prem C decider to Rovers.

St Bedes/Mentone were the most surprising story of 2014. Relegated from Premier a year after playing in the Grand Final. Nevertheless the club has not imploded and Mick Dwyer continues what they hope will be a stable re-build. There is enough young talent at the Tigers to suggest they should bounce back quickly but the mental challenge of learning to win again is the first hurdle

St Kevin’s are most pundit’s monty for at least a Grand Final appearance. That means they need to win a final for the first time in a decade. With the recruiting they have done, on paper this should eventuate. Daniel Harford is joined by co-coach Jon Edgar and SKOBs will have a full season to utilise and exploit their excellent facilities at TH King for the first time.

So that’s the synopsis, it all starts this weekend and ends on the last weekend of the year in September. Many more words will be spoken, written and consumed between now and then, but at least we can all be comfortable that today is a great day for all ten teams of Premier B.