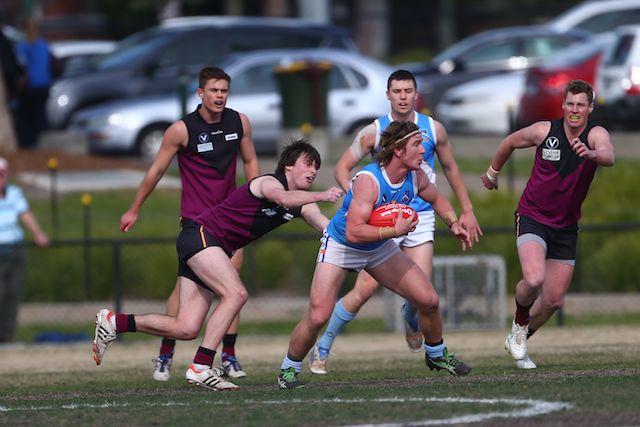 Premier C: Top four all but locked away

With one round in the home-and-away season remaining the top four is all but locked in for next fortnight’s encounters. The first three have been guaranteed for some time, however fourth place, currently in Old Haileyburians’ warm hands, could still loosen their grip on a finals spot if two upsets occur. Marcellin will hold onto the minor premiership after defeating PEGS last weekend with Monash Blues tucked closely behind them in, beating Old Haileyburians. Elsewhere, Old Ivanhoe moved past Old Camberwell, Peninsula kept Therry Penola in the relegation zone for another week, and Oakleigh rejoined the winner’s list with a victory over Williamstown CYMS.

Marcellin’s showed its supremacy over PEGS in the first quarter with five goals to two and maintained that dominance throughout the game. The Bombers could never close the given gap set by the Eagles across the next three terms. It was far from the blow out that was expected, particularly considering the polar opposite ladder position as Marcellin claimed a standard 32-point win. Jeremiah Antypas led Marcellin’s goal tally once again with four majors while Jonathan Bortolotto and Daniel McMahon kicked three apiece.

Old Haileyburians played host to Monash Blues as the two top four sides clashed at Princes Park. And the second seeded Blues ended the fourth placed Bloods in the first quarter. Monash rattled five goals past Haileybury and held them goal-less to take a decisive 30-point lead. The Bloods got as close as 19-points but could never completely breach the deficit. Inaccuracy in the end cost Old Haileybury as they kicked 7.15, as the reverse score line would’ve turned it into a victory. Instead they fell 28-points shy of the four points. Maddison Hardiman booted three for the blues and Jake Meade was named best on ground.

Old Ivanhoe was facing a two-point deficit at the end of the first quarter against Old Camberwell, but adjusted soon after to holster victory. The Hoes kicked six goals in the second to gain the lead and began to slowly creep away with the points in the second half. The Wellers made another run at Ivanhoe in the third and won the quarter, but the lead was stretched out again in the fourth to hand the Hoes a 39-point victory. Michael Delmonte was Ivanhoe’s best while Bradley Thompson bagged four in the win.

Peninsula was in a similar position to Old Ivanhoe last weekend as Therry Penola got the jump on the Pirates in the opening term. Therry kept the fifth placed Pirates goal-less and snagged four of their own to lead by 22 at quarter-time. But in a similar vein to what the Hoes did, Peninsula clawed back in the second. Their lead progressed in the third quarter and secured a game-winning buffer midway through the fourth to win by 23. Jarrod Bannister was Therry’s shining light with seven goals while Stefan Barbour was Peninsula’s best with three.

It took until the last quarter for Oakleigh to dispense Williamstown CYMS but the eight-goal quarter sealed the Krushers’ return to the winner’s list. Following an even first quarter Oakleigh drifted to almost a five-goal lead at the half. The CY’s responded in the third to draw the margin to four points at the final change but were helpless against Oakleigh’s rampant final term. Aaron Cloke led the charge as per usual with six goals for Oakleigh while Patrick Loannidis was their B.O.G.

In the last round, Williamstown CYMS host Old Ivanhoe; I expect the Hoes to show pre-finals form and claim victory. Monash Blues play Oakleigh in what will be a close win for the Blues. Old Haileyburians travel to Old Camberwell and in order to guarantee a finals place the Bloods must win. PEGS and Therry Penola do battle at PEGS Sporting Fields; the Lions could potentially escape relegation in the last game if they win here. And Peninsula faces Marcellin with the Pirates needing to pull off an unlikely victory over the Eagles and an Old Haileyburians loss to Old Camberwell for them to squeeze into the four. I expect the Eagles to retain their form and keep Peninsula out of September action.