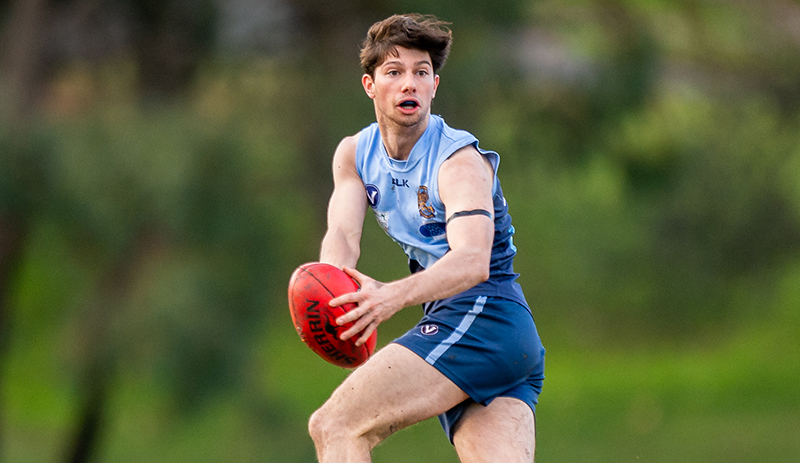 Return bouts as Div 1 is restored

The 2019 Division 2 Grand Finalists will meet for the second time this year after the Friars dismantled NOBS by 82 points in Round 5. While they haven’t registered a win since, NOBS have put together two of their three highest scores of the season against St Mary’s and PEGS and, more impressively, kept those two sides to 54 and 67 respectively – the two lowest scores against NOBS this year. The scoring machine that is Whitefriars kicked a season-high 157 points in their last outing against Old Peninsula but have twice been held to 68 points or less this season – giving the slightest hope to NOBS. Daniel Wood (22) is equal-first in the Division 1 goal kicking, while teammate Michael Nitas has slotted 15.

These two sides met in Round 3 this season with the Wellers continuing their undefeated run (at the time) with a 47-point victory at Ferndale Park. It’s safe to say the Saints have improved since the opening month, with three wins in their past three outings – including scores of 97 and 100 against PEGS and Oakleigh. The Wellers, who still sit on top of the ladder, have had the best part of a month to ponder their first loss of the season against Prahran Assumptions, and you’d be a brave man to tip against Riley Verbi, Ben Hart and James Allen as they look to re-enter the winner’s column.

In a battle of seventh vs ninth, the Pirates will be looking to replicate their only win of the season when they defeated Therry Penola by 12 points in Round 2. Not only was it the Pirates’ only win, their final score of 12.14 (86) was their highest of the season as they have been unable to kick a tally above 54 since. As far as scoring is concerned, the Lions haven’t set the world on fire either, with three consecutive scores of 28, 48 and 49. Granted, their 49 against Kew came from a wayward 5.19, the Lions will be hoping to straighten up and put a three-game gap between themselves and the bottom two.

Another interesting match-up, this fourth vs fifth battle will likely shape the final four as we enter the second half of the season. There are already two games between them, so a loss for PEGS and a three-win gap will make it awfully difficult to maintain touch with the four. Prahran enter this one full of confidence after knocking off Old Camberwell in Round 7, with Matt Clifford and James Musster running wild through the midfield. Pegs themselves ended a four-match losing streak in their Round 7 clash with Brunswick, and they’ll be counting on Jackson Marr, Andrew McDonald and Blake Roach to continue their strong form.

There have only been two games since Oakleigh pulled off a sensational nine-point victory over Kew in Round 5 but the plight of these sides since then has been drastically different. While they put in the performance of the year to knock the Bears off, the Krushers have struggled to fire since and gone down to Whitefriars and St Mary’s with scores of just 50 and 73. While key forward Aaron Cloke is equal-first with 22 goals, the Krushers are struggling to find other avenues as they rank sixth for points scored. As for the Bears, they’ve defeated Old Peninsula and Therry since last losing to the Krushers with scores of 109 and 95 – two of their three highest of the season.