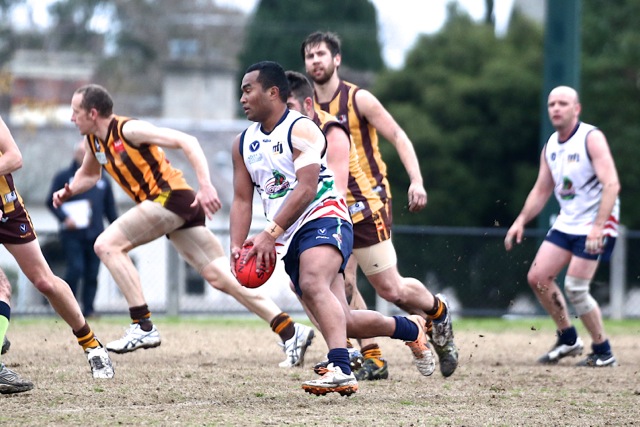 In Division 1, the result of the day was undoubtedly the draw between Bulleen Templestowe and Yarra Valley. The Bullants almost pinched a famous victory as they booted seven goals to the Bushrangers two in the final term. Unfortunately both sides needed the win; Yarra Valley now three games from finals, whilst the Bullants are two and half games from safety, stuck in ninth place.
Therry Penola again demonstrated that they only have themselves to beat when September rolls around. The Lions comfortably accounted for third placed NOBs/St Pat’s by 78 points. Jarrod Bannister again on the end of much of the Therry midfield dominance, he ended the day with eight goals.
Whitefriars made it two wins on the bounce and essentially send MHSOBs packing form the Section with a 49 point win. Woods kicked five goals in the win that sees Whitefriars move two and half games clear of the relgation places.
Williamstwon CYMS took a step towards securing the double chance with a nine point win over Old Mentonians. Molan booted five goals in the win although the CY’s won’t be happy with their last quarter fade out as Mentonians charged home to almost over run Willy from 40 points behind.
Old Geelong secured an invaluable four points in the finals race, defeating Prahran Assumption by 28 points and in the process creating a two game break on the Two Blues and other finals aspirants.

St Mary’s Salesian returned to the winners list with a 63 point win over Elsternwick at Elsternwick Park in Division 2. The Saints had eleven goal kickers in the win.
Old Paradians dismantled Glen Eira as the Raiders saluted by 161 points. David Boundy kicked 8 goals in the win.
Old Eltham threw the premiership race wide open by handing Kew just their second defeat this year. The Turtles were on from the start, going toe to toe with the Bears over the opening half before drawing away in the second half to win by 35 points.
St John’s continued their mid season revival with a nine point win over South Melbourne Districts in Albert Park. The Jocs were held goalless in the first as Districts booted six but they worked their way back into the game before going on the record a great come from behind win.
Ivanhoe also kept up the pressure on those in the four with a big 94 point win over Monash Gryphons. Lovell booted seen goals in the win, although both Ivanhoe and St Johns are still two games out side the four.

In Division 3, Albert Park did as they liked in their 227 point win over South Mornington. Maunder kicked a dozen goals whilst Sjostrom bagged six of his own in the win.
St Francis Xavier made life difficult for Eley Park, handing the Sharks a 48 point loss. Scott kicked five goals in the win that has the X-Men in sixth spot tonight.
Northern Blues proved too strong for Power House with a big 64 point win at Ross Gregory. The win has the Blues equal top of the ladder, albeit they sit second on percentage.
Emmaus St Leos made it 10 straight wins after they beat Richmond Central by just a goal. The Snakes almost pinched an important win but the Animals found a way to get over the line and stay on top of the Division.
Swinburne University comfortably won the battle of the Students as they beat off the challenge from La Trobe Uni by 69 points. Kennedy bagged five goals and Lugg four as the Razorbacks stay outright third with the win and La Trobe remain in the bottom two on percentage.
UHS-VU beat a quality team in Aquinas by 15 points in a spirited contest that has an impact for both teams finals aspirations.

In Division 4 Hawthorn were made to earn their win over Manningham Cobras, the Hawks only kicking away in the final quarter to win by 22 points.
IN the Brunswick derby, West prevailed over North by 49 points to further cement their place in the top two.
Canterbury also put a rubber stamp on their spot in the four with a seven point win over Point Cook. Baker kicked five goals in the win.
Box Hill North kept up the pressure on those above them with a 67 point win over Dragons. Lowden booted five goals in a losing side, whilst ten Demons got on the board in the win.
Westbourne Grammarians charge towards finals continued as they handed Chadstone a 206 point thumping. Grammarians had 12 players on the score sheet, but six goals to Johns and five to Ray were the top scorers in the rout.