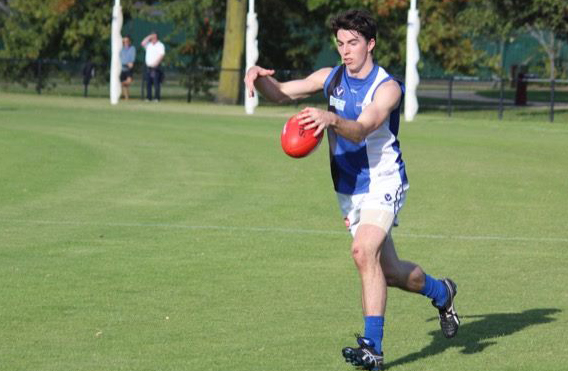 Congratulations to Tom McKenna of Mazenod who has been named the Round 14 Grill’d Rising Star for his standout performance against Ormond over the weekend.

“Tom went to Mazenod College and joined the club in 2014. His leadership was evident early on and he was named as the captain for the Colts. Tom was a key part of the team who consistently dominated the opposition and would go to lead them to a premiership.

In 2015, Tom continued his development with Under 19’s, playing a number of good games which lead to him being selected for his senior debut against Old Melburnians at the Junction Oval. Tom adjusted to the level of competition with ease and was amongst the best players for Mazenod.

In 2016, Tom has taken his game to a new level, with his attack on the football, pressure at the contest and breakaway pace. He has many a chase down tackle on his highlight reel.

He is a key member of the senior team and his form has been excellent which lead to him being named in the VAFA Under 19 Representative team. He was commended by the coaches for his communication, attitude and endeavour. He is seen as a role model for the younger players at the club for the way he goes about his preparation and is seen as a future leader of the club.”