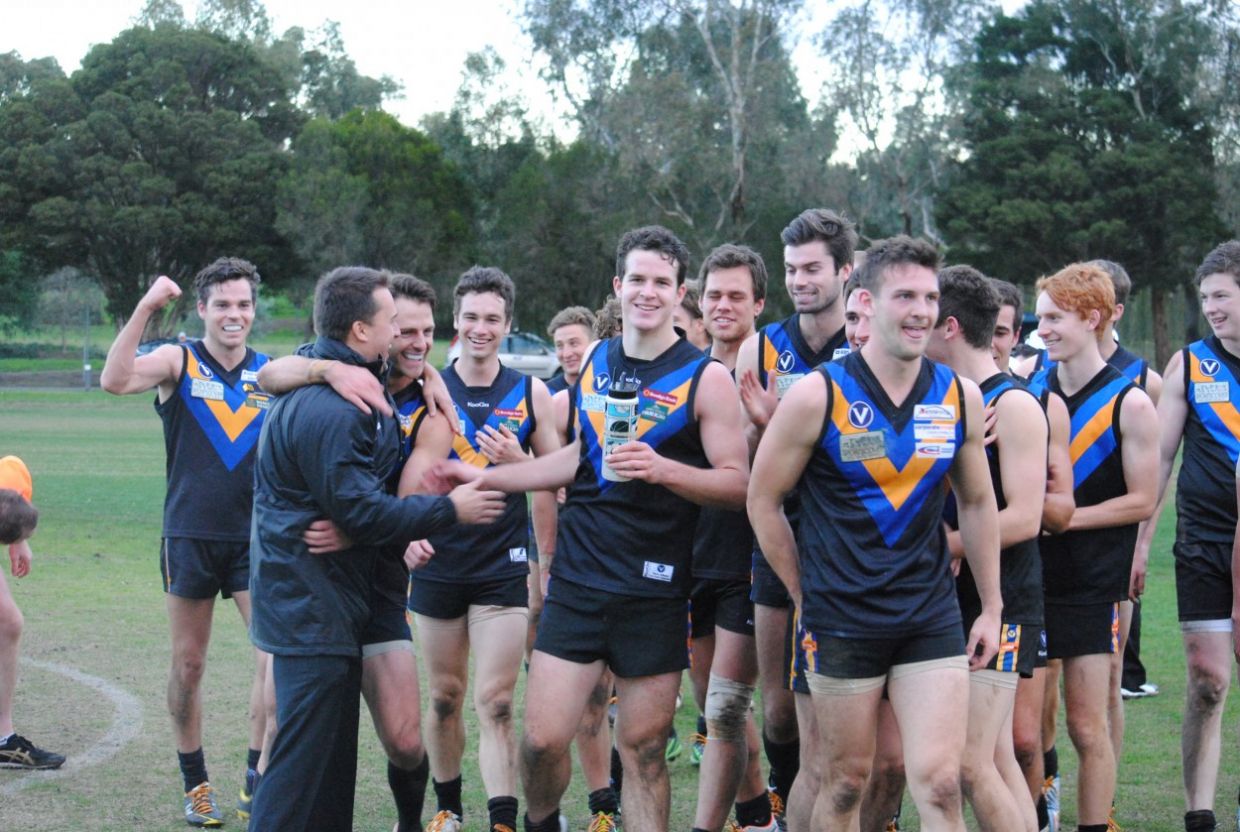 So many highlights from round 9, but nothing beats that winning feeling, a feeling that Old Carey and Werribee experienced for the first time in 2013.
St Bedes/Mentone won by the smallest margin ‘away’ at Old Xaverians other home ground of Stradbroke Park. The Tigers matched Old Xavs throughout the contest but it was their response of four goals in time on of the third to wrest back control they had relinquished that was most telling.
At Camerbwell the margin was just two points as the away side – University Blacks – hung on to win over a charging Old Scotch.
As mentioned above Old Carey won their first game of the year comfortably accounting for Beaumaris by 44 points. The goals were shared in the Panther’s first four quarter display for the season.
University Blues won at home against St Bernard’s to drag the Snowdogs into relegation consideration. The 37 point win was achieved courtesy of a five goal to none third term.
In Premier B Old Melburnians returned to playing in the daylight and Alex Armstrong (5 goals) had no problems adjusting his focus to daylight conditions, helping the redlegs to a 58 point win over Fitzroy.
Old Trinity dropped their second game of the year at Old Brighton. The Tonners Tim Mentiplay booted 7 goal in the 27 point win. Old Haileyburians had Travis Ridgeway kick 7 goals in their 21 point win over Caulfield Grammarians.
Werribee would be in party mode tonight as they too celebrate their first win of 2013. Werribee defeated Parkdale Vultures by 15 points on the Vultures home turf. Chad Ryan’s six goals weren’t enough to for the Vultures but the Tigers Chris Molivas’ five goals were enough for the visiting team.
St Kevin’s stormed home with a ten goal final quarter to romp pas AJAX by five goals. SKOB’s have made a habbit of these rollocking come from behind efforts in recent weeks, however this week they secured the four points. Karageorgiou was brilliant with seven goals for the home side.
In Premier C a top of the table classic was fought out at Monash University. Mazenod inflicting a first loss of the year on Monash Blues as the Nodders won by 3 points and take over the mantle of top dog and premiership favouritism in the Section. The final margin was just 2 points in a classic that augurs well for when these two meet again this year.
Old Camberwell had 13 individual goal kickers on their way to a 61 point win over NOBs-St Pat’s. Old Ivanhoe had a classic encounter with Banyule and managed to win by 9 points at the pine lodge. Nick Butler’s 7 goals were two too many for Ryan Hay’s five for the Bears.
PEGS had a good win over Oakleigh at home. Daniel Flaherty’s five goals helped the Bombers to a 24 point win.
Peninsula returned to earth with a thud after Marcellin beat them by 93 points on the Pirates own patch. Daniel Jones stood out with six goals but the Eagles had winners everywhere.