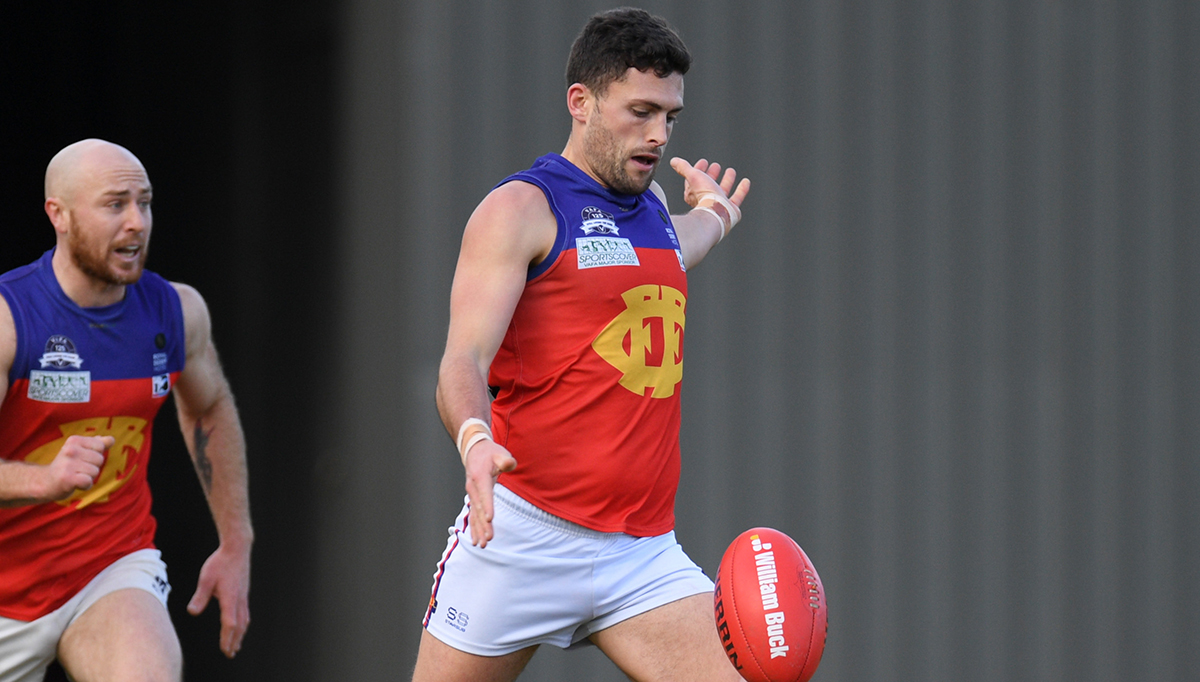 Fitzroy FC will go into the final series confident they can close tight matches after a stirring two point victory over PEGS Football Club at Brunswick St Oval on Saturday. The Roys remained in control over the first half, leading by 21 points at quarter time and holding on for a slim seven-point margin at the main break. The Bombers responded with a solid third-term effort to steal a nine-point lead by three quarter time, but it was the Roys who held their nerve and kicked towards a two-point win to end the season. Fitzroy’s Max Ellis and Sam Baker each kicked three goals for the winning side, while Thomas Cheshire also stood tall. Four players kicked two majors for the Bombers, including Adrian Romanyk who takes out the competition’s leading goal kicker award this season with 61 majors, 10 ahead of runner up Adrian Del Monte of Old Ivanhoe. The Roys finish in the top two and will boast the coveted second chance in finals, while the Bombers season comes to an end in 8th.

Old Geelong showed that Williamstown CYMS are in fact very beatable as both teams head into the final series, with the OGs upsetting CY by 48 points at Como Park. CY took the lead early, before the OGs kicked five second quarter goals to take a lead which they never gave up. Ultimately though, it was CYs inaccuracy in front of goal that proved detrimental, with the visitors kicking 9.17 to the OGs very straight 19.5. Will Sloss earnt Best on Ground honours for the OGs, with Christian Hatzis slotting five majors and Matt Bird and Scott Dixon each chipping in three. Ben Gray was the only multiple goal scorer for CY with three majors, while William Chan also impressed. The OGs finish the season in 3rd, while CY claims the minor premiership.

Peninsula’s season came to a disappointing end after Old Camberwell delivered a 104-point thrashing at Gordon Barnard Reserve. While the Pirates were able to contest in the majority of the quarters, it was eight unanswered goals from the Wellers in the third term that did the most damage. Peninsula was even able to outscore the Wellers in the fourth term, in what would have been some little victory, but ultimately proved futile. Old Camberwell’s Nicholas Adamson was again the star with seven goals in a Best on Ground performance, while Nick Latsas (5) and Sam Boyce were also dominant forces for the victors. Alex Wood kicked two goals for the Pirates, while Shaun Payze and Mikey Mclellan fought hard in trying circumstances. Peninsula finish 9th for the season, and unfortunately will be relegated next season, while the Wellers finish 4th and will have the chance to contend for the premiership.

Old Mentonians late season form continued into the last round with a 44-point win over St Mary’s Salesian at Keysborough Playing Fields. Dominant first and third quarters from the Panthers proved the difference, with the home side kicking six goals to two in each of these terms. The Panthers’ Darcy Brown, Lachlan Boyd and Keiffer Smith-Cameron each found the goals on three occasions, while Bryce Damin was awarded Best on Ground honours. Manny Dolan held the fort down forward for St Mary’s with five majors to his name, while Jake Kidman was the Saints best in his first senior game of the season after coming up through both thirds and seconds this year. The Panthers finish 7th overall for the season, after fear of relegation only a month earlier, though it will be relegation for the Saints who finished with the wooden spoon this season.

Marcellin OC finished their season in high spirits with a 52-point win over Old Ivanhoe at Marcellin College on Saturday. With the contest fairly even in the second half, it proved to be the first half, where the Eagles outscored the Hoers 13 goals to five, which sealed the victory. Isaac Nolan and Adam Tomaro starred down forward for the Eagles with five and three goals respectively, while James Robertson was judged best afield. Hoers’ Kane Veliou kicked three goals in his first game in the seniors side after playing a number of games in U19’s this year, and was duly awarded best honours for the defeated. Sam Geilings played his last game for Old Ivanhoe after playing 220 games in the brown and white, with the Hoers finishing in 6th this season, just behind the Eagles who ranked 5th.

With the final round of the Premier C home and away season complete, four teams now remain in the hunt for the coveted premiership cup.

Williamstown CYMS will play Fitzroy FC at Bill Lawry Oval on Saturday for the first spot in the grand final. Both sides have faced each other twice this season, with the Roys 45-point victors in Round 7, though CY returned the favour and levelled the score with a comfortable 22-point win in Round 17. With both sides known as the teams to beat this season, with CY only losing two matches and the Roys only narrowly behind with three losses, it could be anyone’s game.

Old Geelong will line up against Old Camberwell in the elimination semi final at Bill Lawry Oval on Sunday.

Similar to the first final on Saturday, both sides will also go into the match having beaten the other, with OG 19-point winners in Round 4 before the Wellers responded with a 14-point win in Round 10. Both OG and the Wellers sit close together on the ladder with 12 and 11 wins respectively, though each team has lost and won matches they weren’t expected to at times throughout the season.