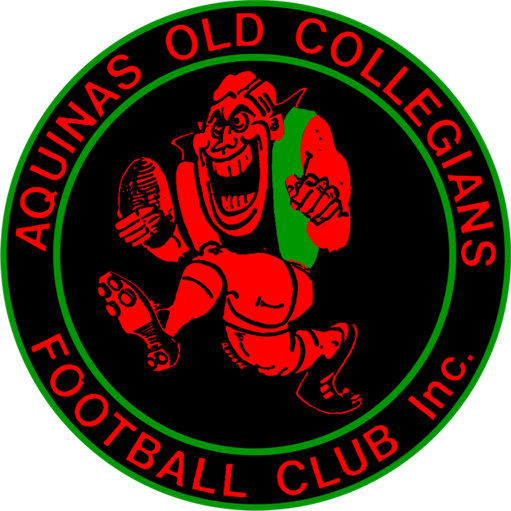 Aquinas Old Collegians Football Club came into existence in time for the 1981 season but it wasn’t until the 1987 season that they played in the VAFA. Those initial years were spent in the Eastern Suburban Churches competition. Upon arrival in the VAFA, Aquinas were entered into F Section and it was a memorable start, as the Bloods won the senior premiership that year by a solitary point against Whitefriars. Since that first premiership, Aquinas were able to ascend to Division 1 level, but were unable to bridge the gap to reach Premier C. Two preliminary final losses in three seasons in Division in 2000 and 2002 were as close as they would get. Aquinas did win a second senior flag in E East Section of 1996 a year after they were runner-up in the same section. The VAFA’s geographic zoning of the time, hindering chances to reach a high grade faster or perhaps it helped the Bloods to that second flag. After four years in Division 3, the Bloods were one of three clubs relegated to Division 4 at the end of the 2016 season after the VAFA made the decision in a bid to even each section at 10 teams and eliminate the bye brought upon by a nine-team section. The Bloods bounced straight back in 2017 with premierships in the seniors and reserves under new coach Ash Naulty.

﻿ No. 1 | It took some grand final magic from Aquinas U19 VC Harry Dwyer to...read more

Originally posted by Aquinas OCFC at aquinas.com.au It is with great pleasur...read more