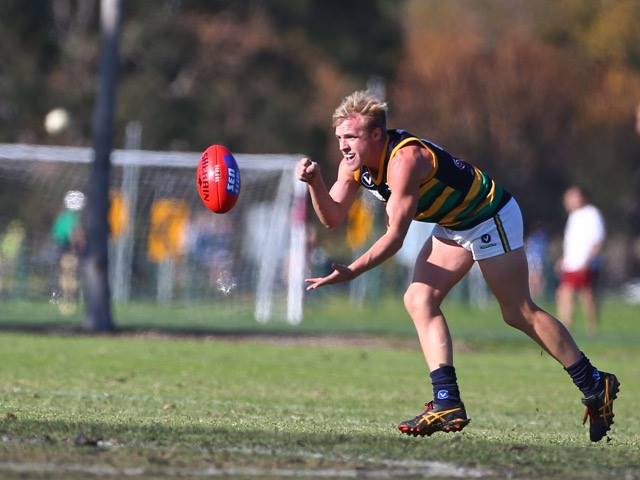 St Kevin’s delivered Old Trinity’s first loss of the season with six fourth-quarter goals helping them to a 16-point victory at TH King Oval. Trailing by 26 points at the last break, SKOB controlled play for the entirety of the last and kept the T’s to just the one behind. Despite being well-held for the first three quarters, Steven Salopek (three goals) and Stephen Gilham (two) stood tall when the game was there to be won, while Jason Salopek and Dylan Jones continued the standout performances they’d shown since the second term. The T’s came out firing in the first, kicking eight unanswered goals, with Harry Tinney recording three of them in his return from injury. Luther Juric and Luke Pacconi were the T’s best, while the Hunt brothers attacked with poise.

De La Salle put a poor second quarter behind them and kicked 12 goals to three in the second half to defeat Old Carey by 82 points at Carey Sports Complex. Leading by seven goals at the first break, De La were put under extreme pressure by the Panthers, who kicked six goals to one and brought the margin to 12 points at the half. Sim Pickett and Adrian Indovino led from the front on the scoreboard during De La’s second-half resurgence with four each, while Sam Williams continued his red-hot form as best afield.  Jacob Murphy and Sam Cust were the best for the Panthers for the second straight week, with the latter also bagging two majors. The final margin was enough for De La to regain second spot on the ladder despite OMs getting the four points against Collegians.

Old Melburnians made it two wins in a row when they defeated Collegians by 20 points at Sportscover Arena. In another low-scoring game involving the Lions, OMs did enough to lead from start to finish despite just 11 goals being kicked between both sides for the match. Tom Cameron was named best on ground in his second outing for the season for OMs and George Hurley-Wellington showcased the form which has him in the Big V senior squad of 44. Tom Penberthy continues to light it up for the Lions, but they now fall below St Kevin’s and into eight spot on the William Buck Premier ladder.

A five-goal to two final term has helped University Blacks to a 27-point win against St Bernard’s at University Oval this afternoon. Leading by just five points at the last break, Lochy Dornauf, Alistair Robbins and Hugh Curnow registered majors in the fourth and the Blacks recorded their third win on the trot. Bede Mahon and Adam Pitt dominated for the Blacks, while Tom Sullivan was best for the Snow Dogs for the third consecutive week. The win elevates the Blacks to fifth position on the ladder, while the Snow Dogs remain ninth with just one win for the year.

University Blues registered their fifth win for the season after they came from behind to defeat Old Xaverians by 10 points at Toorak Park. Trailing by a goal at the main break, the Blues drew level at three quarter time, before kicking away with three goals to one in the fourth. The mercurial Tom Quinn kicked three for the third time in as many weeks and Will Cuningham was superb throughout for the Blues. Lachlan Howe led from the front for the Xavs, while Matt Margin snagged three. The Blues solidified fourth spot on the ladder, while the Xavs fall to sixth after their second consecutive loss at home.