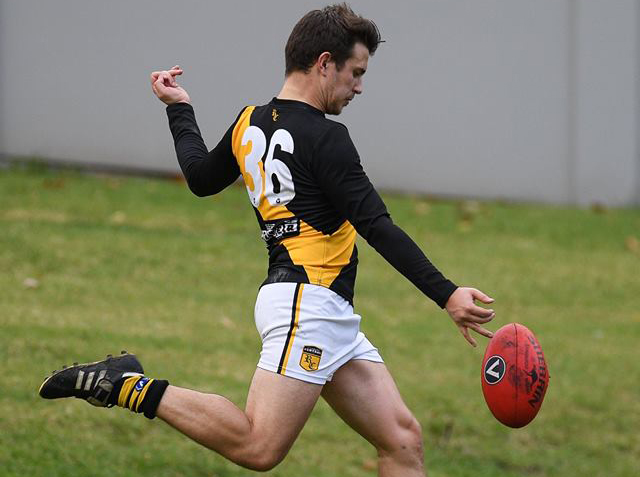 In Round 17, Richmond Central flexed their muscles in the final quarter with seven goals to run out 51-point winners over bottom-placed North Brunswick at Allard Park. North Brunswick led at the first change by eight points, but this was the only time they led in the match with the Snakes winning the three remaining quarters. For Richmond Central, Cameron Worsley booted through four goals, Jake King kicked three majors, while Simon Costa, Joel Luis and Cameron Pulled kicked two goals each. For the defeated Bulls, Andrew Ramzy kicked three goals and Michael Salloum nailed through two majors.

It was a dominant performance from third-placed Emmaus St Leos on the weekend as they defeated Parkside by 58 points at Bennettswood Sports Ground. It was a tight opening term, with only two points separating the teams at quarter time, before the Animals came out with intent in the second quarter booting through 6.10 while keeping the Red Devils goalless. The contest tightened up in the third quarter with Parkside bridging the gap on the scoreboard with five goals to Emmaus’ two, but the Animals ran away with the match in the last quarter kicking five goals to Parkside’s two. Christopher Beluszar (4) was the Animals leading goal scorer for match, while the Red Devils’ Cameron McFadyen (2) and Cody Lawson (2) combined with four goals.

In the match of the round, first placed Manningham Cobras AFC proved too strong for Westbourne Grammarians with a 27-point victory at Westbourne School Ground. Both teams were evenly matched in the opening half, with only five points the gap at the main break, before the Cobras came out all guns blazing in the second half, nailing through seven goals to Westbourne Grammarians three. Anthony Raso was the leading goal kicker for Manningham with three, as teammates Jake Cawsey, Ben Arnold and Kane Maghamez kicked two goals apiece. Chris Hudson (2) was the only player to kick multiple goals for the Warriors. With the win, the Cobras remain top of the table one game clear of Aquinas who had a bye on the weekend. Westbourne Grammarians are equal third on the ladder, but fall from third to fifth spot due to their percentage being lower than Emmaus St Leos and Canterbury’s.