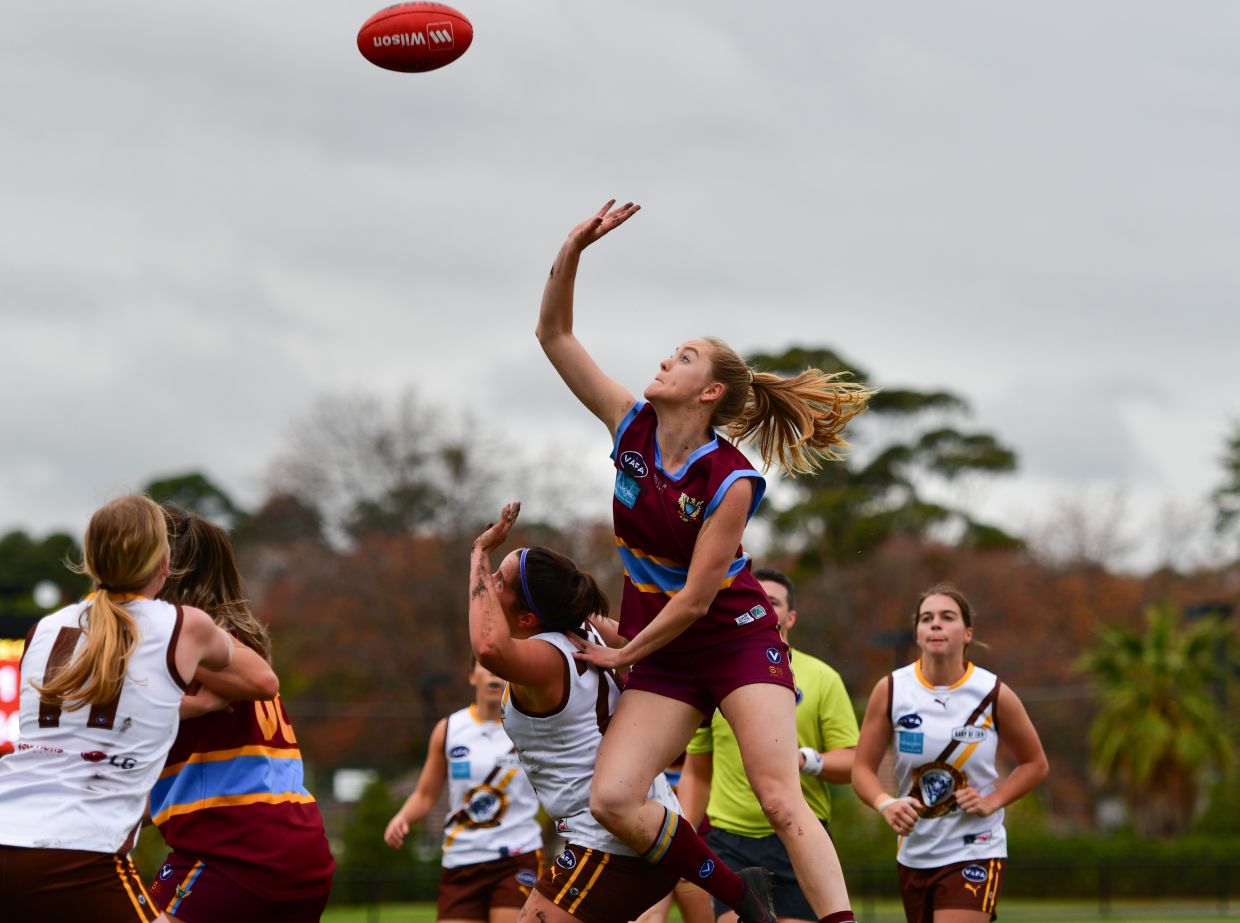 The wind was beneath the Sheagles wings in Round 5 as they defeated the last team in the William Buck Premier women’s competition to register a loss for season 2019, Kew. A tight first-term between the Bears and Marcellin ensued at Victoria Park, with the home side’s Jessica Burger registering the only score with a behind, before the game opened up and Big V squad members Shaylee Taylor (3) and Tessa Zagontinos (1) were able to find the middle of the sticks with a goal apiece in the second. With only seven points the difference heading into the final quarter, the Sheagles well and truly swooped in the fourth, as they did in their inaugural win for 2019 against St Mary’s in Round 4, as the forward pressure of players like Megan Chadwick (1) and 2018 Anytime Fitness Rising Star recipient Laura Robertson, proved instrumental in keeping the Bears scoreless and securing those four premiership points. Big V squad member Isabelle Harding was rock solid for Kew with her 21 disposals, but it was teammate Lily Barr who proved the most prolific after accumulating 26 disposals, nine tackles and eight of her side’s 25 forward fifty entries off her own boot. Kew are set to travel in Round 6 as they are greeted by a St Mary’s Salesian side pining for premiership points after three losses in a row, while Marcellin’s next challenge is at Ramsden St Oval against Fitzroy-ACU.

Despite entering their respective forward 50’s the same number of times (30) for the day, SKOB Saints superior efficiency in attack (47%) saw them emerge as 17-point victors over Melbourne University at Righetti Oval. After boasting the most number of selections in the 2019 Big V squad (5), this star-studded SKOB outfit, led by Sarah Cameron’s four goals and Margie Gleeson’s two, demonstrated why this was the case as they pushed the reigning premiers to their limits; epitomised by their 8.6 to 1.3 respective scores at 3QT. In a turn of the tide in the fourth, the talent in the Mugars line-up,was at the forefront as the Uni women held the Saints scoreless while snagging 2.3 through the ilk of Leah Caluzzi (1) and Emma Collard (1). The Mugars confidence would certainly be lifted following this considering they (1) notched their highest total score for the year and (2) accumulated 30 forward 50 entries –  a result far and beyond their average of 13 entries per game in the opening four rounds. Though greatly improved, and far more synonymous with the usual on-field performance we’ve come to expect from the reigning premiers, their pressure around goals, plus their ability to convert and better their current 35% efficiency in the forward 50, will be a continued focus at the club. A possible finals insight, SKOB (2nd) have their eyes set on Old Trinity (1st) in Round 6, while earlier scoreboard impact in their Sunday morning rumble against West Brunswick could just see the Mugars join the winners circle.

After a blistering two from two start to the season, St Mary’s Salesian now find themselves in the middle of the William Buck Premier pack (5th) after enduring their third consecutive loss at the hands of a very formidable Old Trinity. The highest scoring contest of the round, both sides took little time to impact the scoreboard as a joined 7.1 was booted in the opening term and the Saints, in front of a home crowd at Ferndale Park, edged a seven-point margin. Despite trailing, the OT’s again proved “consistency is key” as they added 2.1, 2.0 and 2.3 to their score in the remaining quarters, and inevitably ran out as four goal winners. Again dominant around the stoppages, Big V squad member Imogen Barnett was a cut above with her 35 hit outs and solitary goal, while fellow Big V squad member, albeit from the other team, Stephanie Lawrence (1) was gallant. For first placed Old Trinity, a delectable top-of-the-table clash on their home turf awaits in Round 6 as they are put to the test by a determined SKOB Saints, while St Mary’s Salesian will return to Ferndale Park to host a defeated Kew intent on rebounding from their first loss of the year.

West Brunswick’s 36-point outing in front of a home crowd at McAlister Oval proved plentiful as they emerged with an 18-point win over the now 7th placed Fitzroy-ACU. A common theme in this section, early scoreboard impact proved difficult and eventually detrimental for the Roy Girls (Q1 – 0.0, Q2 – 1.1); a result not wholly unexpected when the side registered just 15 inside 50’s for the match duration – a stat considerably below the current inside 50’s average of 21 per game for the section. Curbing the influence of the Westies BOG Rebecca King proved difficult for the Roy Girls, as her pressure on the ballcarrier (six tackles) and strong hands (five marks) saw her accumulate the most possessions for the winners (15 disposals). Not without their own stars, however, Fitzroy-ACU’s Teresa “Razor” Zampaglione (23 disposals, two goals) and Tash Ross-Harris’ (41 hit outs) showcased why they are Big V favourites with their respective performances. Travelling to the immaculate Uni Oval this weekend, West Brunswick will be challenged by a Melbourne University outfit who will roll off, arguably, their best quarter of football of the season in front of their supporters. In the meantime, Fitzroy-ACU have the soaring Marcellin to contend with at Ramsden St Oval.