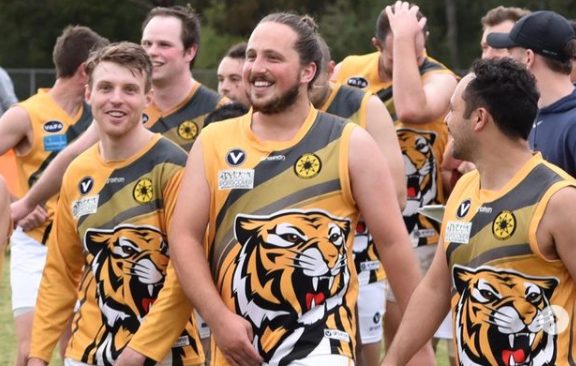 Only one team remains undefeated in Division 4 as another top contender emerges and one club gets their season rolling with its first win in 2021.

Elsternwick’s claims as early season favourites have firmed even further after sending yet another message to its competition, this time at the expense of La Trobe University. In what could have considered the match of the round between these two previously undefeated teams, the Wickers kicked an incredibly accurate 36.5 en route to a massive 155-point victory. A 10-goal first term set the scoring tone for the Wickers, with 8.1 being their lowest scoring tally for any individual quarter of the match. Matt Ball played a huge hand in the scoring rate for Elsternwick, booting 11 goals as did Nick Lowrie who kicked nine, taking his season tally to 32. Cameron Campbell earned best afield honours for the Wickers. In a tough outing for La Trobe, Thomas Whelan was the standout, while Josh Horder managed three goals with Patrick Lindsay and Josh Rogerson kicking two apiece.

Elsternwick will look to further stake their claim as the team to beat in Division 4 as they travel out to Dandenong to take on St. John’s, whilst La Trobe will have another tough task ahead of them as they face the red-hot South Melbourne Districts away.

After holding their own without results going their way, Masala-Dandenong have their first win on the board for 2021. Helped by a 10-goal best on ground performance from forward Declan Fowler, the Tigers comfortably disposed of Box Hill North to the tune of 87 points. While the half time deficit wasn’t insurmountable for the Demons, 12 goals to four in the second half ensured Masala would be leaving Elgar Park with a well earned four points. Paul White and Dale Gibb were also instrumental for the Tigers, with Ritchard Keane having another good outing for Box Hill North and Thomas Cheslett booting three goals for the Demons.

Masala will be eyeing consecutive wins as they head to St. James Park to take on Swinburne University, with Box Hill North on the road to face Eley Park.

South Melbourne Districts announced themselves to the rest of the Division 4 top four with an emphatic win over the then undefeated St John’s. The Bloods continued to apply the heat throughout the match at Lois Twohig Reserve blowing the end result out to a 111-point win, led by Jamie Brooker’s nine goal haul. Leading at the main break by 30 points, South Melbourne piled on 14 goals in the second half not only ensuring the victory but sending a message to the other contenders in Division 4.  Along with Brooker’s best on ground performance, Dave Commins and youngster Tom Foley were impressive for the Swans, while Corey Ely continued his good form for St. Johns.

South Melbourne will get another chance to flex its muscle against a quality opponent as they host La Trobe University at Lindsay Hassett Oval, while the JOC’s will look to rebound against the ladder leaders Elsternwick at home.

And finally, Eley Park are back in the winner’s circle with a convincing win over an inaccurate Swinburne University. Leading by only two kicks at the half, as the Sharks stormed home with 10 goals in the second half as the Razorbacks failed to score a major after half time, booting eight consecutive behinds. Lachlan Steele led the way for Eley Park in another good performance on the season, while Jesiah McGarvie kicked five goals for the Sharks. David Rinaldo and captain Zach Cooke were the standouts for Swinburne.

Eley Park will be looking to keep in touch of the top four with a third win of the season when they host Box Hill North, whilst Swinburne will be eyeing an opportunity to get its season rolling against Masala.