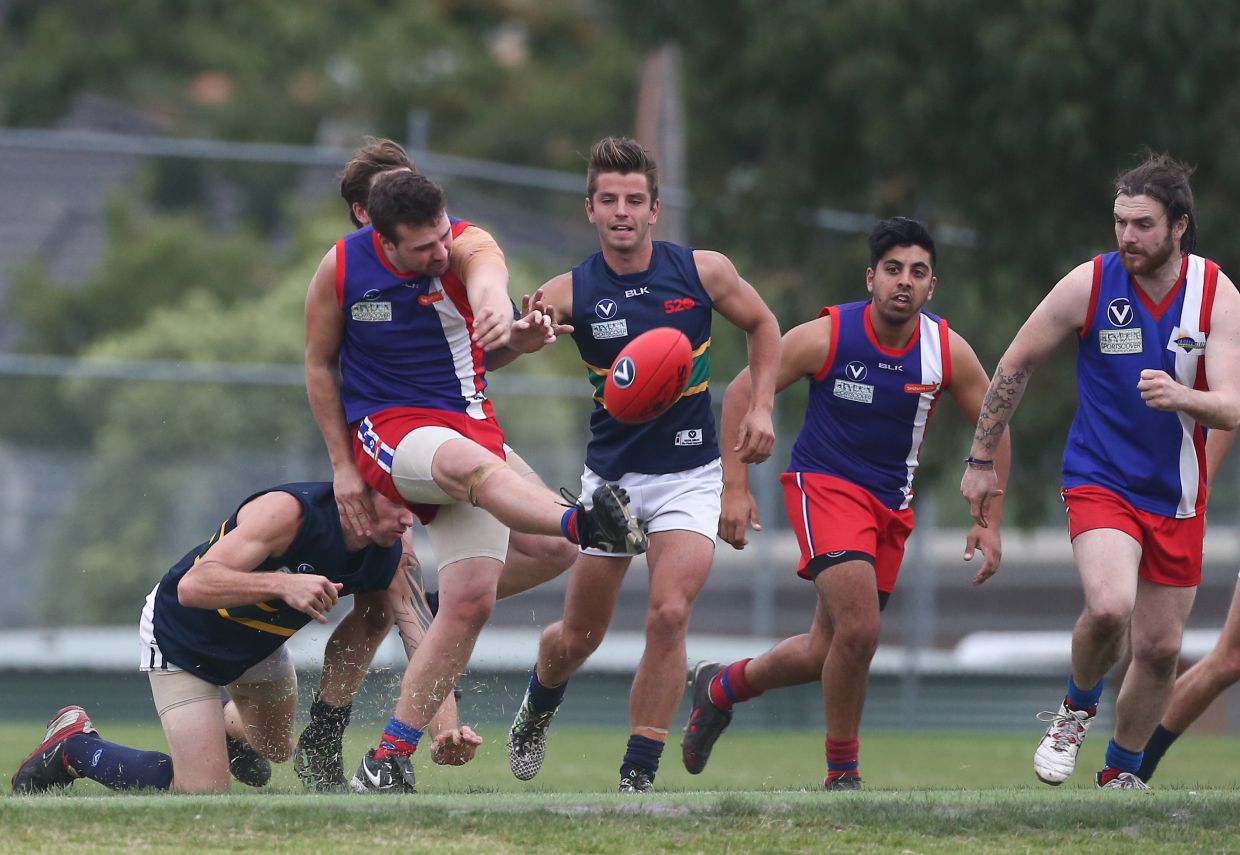 Another week of tough conditions around the Divvy 4 games this week, with two close tussles and two matches over by half-time. Mt. Lilydale were able to outlast the Bulls, Chaddy kicked just the one goal for the third time in four weeks, Manningham were able to hold off Bocky and Masala certainly can hold their heads up high. Everyone has played each other once now and we will certainly get a more interesting second half to the season. To last week’s games:

The match of the round between visiting Mt. Lilydale vs. North Brunswick was an arm-wrestle from start to finish and it didn’t disappoint. After a tied first quarter, continued to see-saw all day as Mt. Lilydale could not shake free from the Bulls as both sides were shooting fairly accurately despite the conditions. Come the fourth, maybe it was the bye the Rams had the previous week but, goal-kickers Max Hampton (5 goals) and Stephen Donald (3) secured the 15 pt victory with Rams Daniel Dimitriou (2) BOG. For the Bulls, they had their normal production from the “BIG 3”, Paul Notaro (4 goals), Paul Butler (3) and Ken Zuidema (3).

Point Cook travelled the wet roads to Jordan Reserve at Chadstone. In wet muddy conditions, a game that was more suited to the big bodied players and those smaller players prepared to go in and get the ball. On a vast majority of occasions, that turned out to be Point Cook, led by players Marcus Groves (1), Matt Smith (1), Tim Seccombe (3) and Alex Grigg (3). Early favourite for league goal-kicking, William Dawson kicked 8. Although Chaddy certainly had their moments, their disposal efficiency by hand and foot made it hard to make any impact. Jon “JB” Britten, who “doubled-up” kicked their only goal for the match, Mick Mitrovski played his best game for the club, Dave “Benno” Bennett was a welcome back and Luke “The Rock” Farrugia were amongst Chaddy’s best.

A game that just missed out on match of the round was 6th vs. 7th, Manningham hosting Box Hill North at Koonung. Again, conditions played a part in the opening quarter where a goal in the wet is usually worth two. “Bocky” rallied in the second, with 4-2 but, struggled there-after as Manningham’s forwards seemed more potent led by Chris Jolly, Mike Miller & Ben Russian (all with 2). For the Demons, missing Captain Dan Penny was not desirable but, the 9 single goal-kickers weren’t enough in the long run. BHN’s best were Colin Osborn and Aloma Obialor but, BOG was Manningham’s Ryan Bradbury.

Masala went on the trek to take on the steam train at Westbourne. After the high of last week and great opening starts, the Tigers went in to the first quarter with some real intensity and desire to create another scare. The Warriors were without Dale Collins but, were still every bit commanding,leading by 50 points going into the half time break. The Tigers matched Westbourne with 4 goals in the third but, the Warriors are able to step it up when required and ran away 111 point winners. Masala are not playing like a second bottom team with their scoreline of 58 was 13 more than what the average opposition scores. Westbourne’s 13 goalkickers (Paul Hudson 5, Justin Johns 4, Mike Culliver 4) again were fruitful. Best on ground was Chris Hudson (1). Masala AGAIN have taken another step forward. The Tigers best was Stephen Daw with his consistent tackling pressure and the returning, Matt Hawes, in ruck.

4/4 tipping and with the Queen’s Birthday looming, everyone got a bye before the next round. Use it wisely. We are over the halfway hump. A chance for redemption, percentage and W-L record is the point of order with (amazingly) 8 teams in the hunt for a finals berth. (Sorry Chaddy boys). We’ve had a rivalry week but, this week, is clearly all Match of the Round week. To next round’s games:

Redemption is the word Chadstone (9th) will use heading to WJ Turner and Masala (8th). Masala’s form has been great and continues to get better. Masala

North Brunswick (6th) head out to Koonung to take on Manningham (5th). Am expecting a repeat performance for both clubs from last week and their last encounter. Cobras

Eley Park (3rd) head up the Maroondah for Mt. Lilydale (4th). The bigger ground will play into the Rams hands but the Sharks’ returning players and extra week from a bye; will edge them out in a much closer outcome than Round 1.

Despite all the scintillating matches above, the match of the round HAS to go to the top of the table clash where Westbourne (1st) has to travel all the way to Point Cook (2nd). Looking at PTC last week, they’re good but, not Warrior good.

Box Hill North (7th) have the bye and two weeks to prepare for their road-trip to Westbourne.