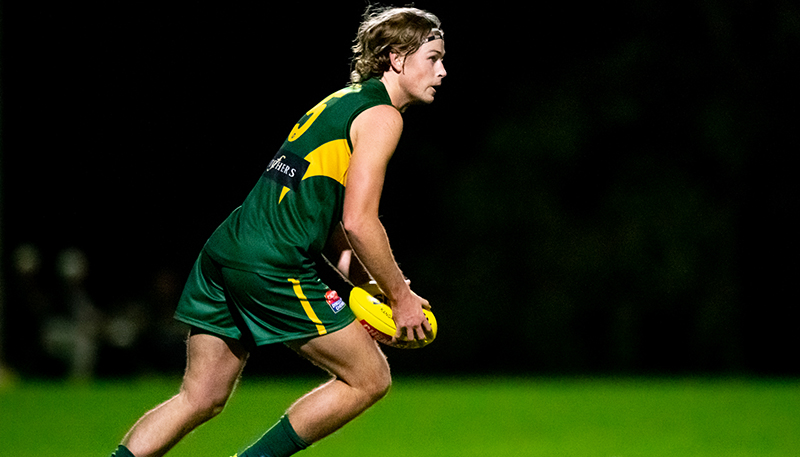 T’s notch first win as Fields settle in the four

Old Trinity will be celebrating this weekend after they claimed their first win of the season, defeating Old Scotch by 10 points at the Daley Oval. Despite having five less scoring shots than Scotch and trailing by five points at the last break, the T’s peppered the scoreboard in the final term with 2.5 to two behinds. Harry Thompson starred for the T’s for the second match in a row, while Ed Weatherson slotted three of their eight goals. Scotch missed crucial opportunities in front of goal throughout the day and finished with 5.14 (44). Aidan Franetic continued his outstanding form and was named the best for the Cardinals.

Caulfield Grammarians made it six straight and secured their spot inside the top four with a commanding 53-point victory over University Blues at the Uni Oval. In a battle of 4th vs 5th, the Fields kicked away with five goals to one in the opening term and never looked back. The forward trio of Julian Dobosz, Brett Eddy and Lachie Stephens each booted three goals, while Will Edwards and Dane Crognale dominated the midfield battle for the Fields. Tom Quinn and Alex Fasolo did their utmost for the Blues, but they now sit one game outside the four with seven rounds remaining.

St Kevin’s OB maintained top spot on the William Buck Premier ladder with a 54-point win over Collegians at Harry Trott Oval. Leading by 16 points after a tough opening half, SKOB put the foot down and booted nine goals to three in the second half. Sam Critchley played up the ground and kicked three goals for SKOB, while Matt Presutto slotted two and was BOG. David Mirra was once again a standout for the Lions, as they welcomed back Kalem Post for his first senior game this season.

Old Brighton survived a first-half scare from Old Melburnians and ran out 25-point winners at Elsternwick Park. The third-placed Tonners trailed by 10 points at the main break but, led by another five-goal haul from Will Lewis, booted 10 majors in a dominant second half. After booting nine goals last week, Lewis was named best afield again, while Harry Hill starred through the midfield. James Regan kicked a season-high four goals for OM’s alongside an impressive display from Ben Haysman. OM’s are sitting sixth – two games outside the four.

The winning form continued for Old Xaverians as they defeated St Bernard’s by 21 points at Toorak Park. Xavs led by seven points at half-time but held the Snow Dogs to two goals while adding another four themselves. Hayden Troiani and Marcus Stavrou dished out another brilliant performance for Xavs, while Ben Huggard and Ben Overman were the best of the Snow Dogs.