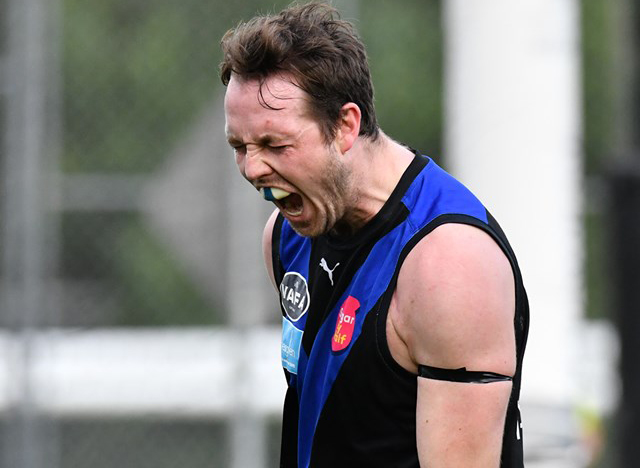 T’s snuff out Snow Dogs as Blues return to form

Old Trinity kept their season alive with a sensational 12-point victory over St Bernard’s at the Daley Oval. Needing a win to bridge the gap between themselves and De La Salle at the bottom end of the ladder, the T’s had 18 scoring shots to 11 as they narrowly outscored the Snow Dogs in every term. Jack Hunt had the ball on a string and finished with 31 disposals and nine tackles for the T’s while star defender Luke Pacconi had 26. Jack Lefroy kicked two goals in his first game and Ben Howell was BOG with 23 touches and a game-high 11 tackles. Connor Riley was outstanding for the Snow Dogs with 24 as they fall into seventh spot. The ninth-placed T’s are now just half a game behind De La.

Six goals to one in the final term helped Old Xaverians to a 26-point victory over Old Melburnians at Toorak Park. After a hard-fought and contested opening three quarters, Xavs trailed OM’s by four points at three quarter time before Brendan Goss and Matt Margin finished off incredible midfield work with two goals apiece in the final term. Matt Merlo and Rohan Bewick had 27 disposals each for Xavs, while Gus Borthwick was at his contested best with 23 and 10 tackles for OM’s. Matt Handley became a focal point in the second half and performed sensationally while Alex Trigar was best afield in the opening three terms with 20 touches from defence. Xavs maintain a two game lead over Blues at the top of the table while OM’s are now a game behind Collegians in fifth.

Uni Blues solidified second spot on the ladder after they defeated St Kevin’s OB by four points at Uni Oval. Trailing by eight points at quarter time, the Blues dominated the second and third terms with nine goals to four before SKOB gave them a fright in the last with the final three goals of the game. Dan Batarilo top-scored with three goals for the Blues while Cam O’Shea (25) and Tom Young (23) led through the midfield and across half back. Nick Wood (31) and Mitch Brown (26) both returned to the line-up for SKOB, Wood leading all comers with 14 clearances. Billy Kanakis and Ryan Kemp each kicked three.

Old Brighton kept their finals chances well and truly alive with a comprehensive 73-point victory over De La Salle at Brighton Beach Oval. 31 scoring shots to three tells the tale of the Tonners’ dominance as they led disposals (+97), inside 50’s (+42) and tackles (+28). Nick Pavlou (39) and Tom Fisher (32) were unstoppable through the midfield with a combined 71 disposals, with Fisher adding 10 tackles and 15 clearances as he stuffed the stat sheet. Hugh Nicholson’s 27 touches was a rare highlight for De La while Howie Perrson had 19 and kicked their only goal. De La are now just half a game ahead of the T’s.

Collegians strengthened their spot in the top four with a 24-point victor over Old Carey at Carey Sports Complex. Leading by 50 points at three quarter time, the Lions gave up five goals to one in the final term as the Panthers relied heavily on star forward Kristian Jaksch who kicked six of his side’s eight goals. Round 9 Rising Star nominee Oliver Jackson booted another three goals for the Lions, while Courtney Hylton returned from injury with 25 disposals alongside 22 and 28 hit outs to new-found ruckman Ben Darrou. Cooper Leon was outstanding for the Panthers with 27 possessions, as was Marc Lock with a game-high 33.