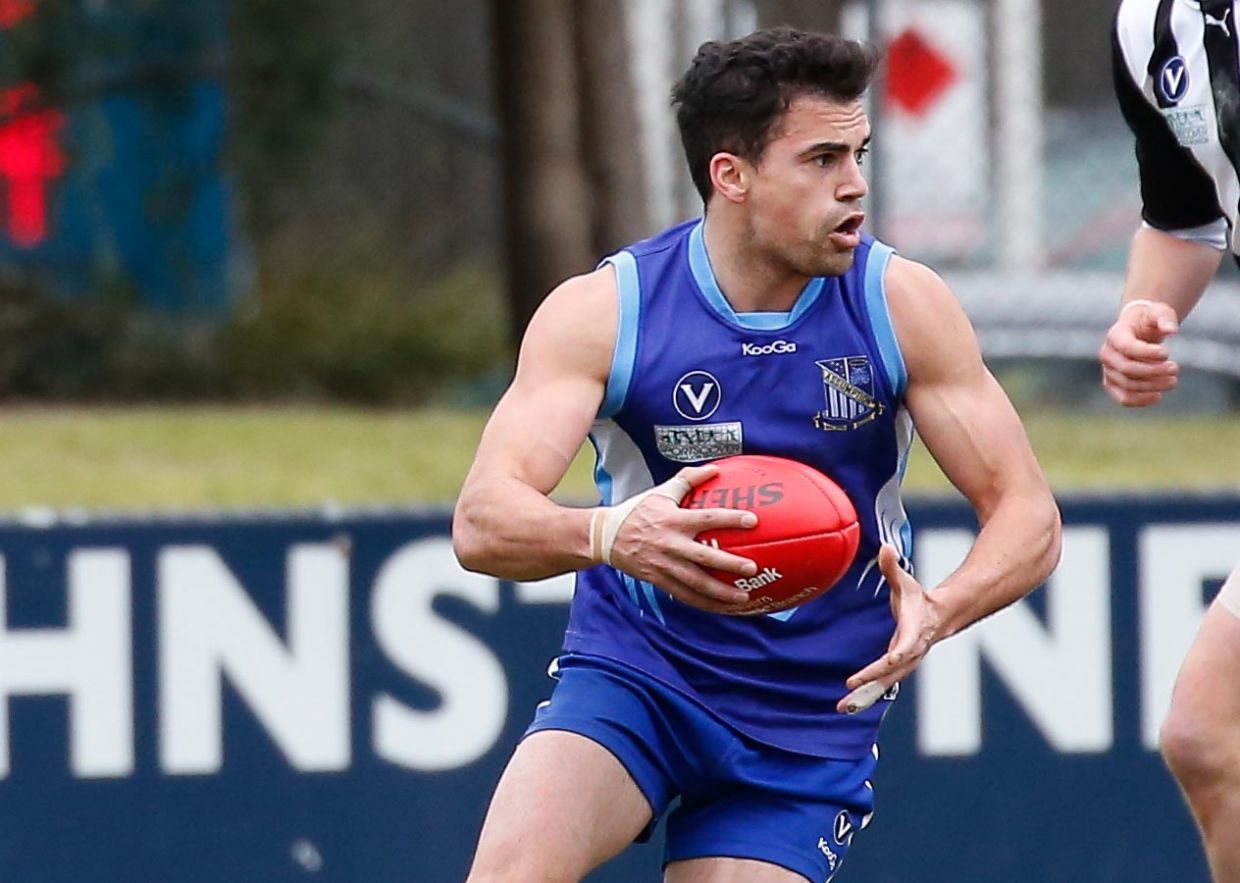 Two Blues too strong in Division 2

Prahran Assumption completed the double in their return to Division 2, taking out the seniors and reserves flags against West Brunswick.

The Two Blues were far and away the strongest team throughout the 2017 season after outstanding recruitment gave them every chance of avenging their three wins and subsequent relegation in 2016. Former Coburg skipper, Eric Kuret, and ex-Bomber Ariel Steinberg led the long list of ins, while captain James Musster was unstoppable and claimed the Fullerton Medal with a whopping 33 votes.

Averaging 111 points per game and suffering just two losses throughout the home and away season, the Two Blues booked themselves a grand final spot against the ever-improving West Brunswick at Sportscover Arena.

Kicking with the breeze in the first term, the Two Blues nailed six unanswered goals and took a 39-point lead into the quarter time break. The Westies managed just one when kicking with the same wind advantage in the second. Musster led his chargers to another three unanswered goals in the third, sealing the game and the A.R Fellows Medal for the best player on the ground while Kuret and Tim Maya registered two goals each.

While the Two Blues were numero uno, the Westies were a clear second as they pieced together a strong 14-win season and jumped into Division 1. Bill Irving once again found himself at the forefront of the Westies’ run toward finals with 16 Fullerton Medal votes, but they were unable to tame the Two Blues and lost for the third time from their three match-ups this year. They were second for both points for (88) and against (66.8) and, more importantly, fielded five teams with the introduction of their women’s and are well-placed for sustained success in Division 1.

Old Paradians were slow out of the blocks and suffered four losses from their first five but gradually improved as the season progressed and successfully made the preliminary final against the Westies. Although going down by 27 points, the Raiders were valiant in defeat and, had it not been for a stunning run of six wins between Rounds 11-17, may not have been there at all. The Raiders replaced Yarra Old Grammarians’ top four spot in Round 15 and refused to give it up for the remainder of the season.

Finals was an outstanding result for MHSOB after they commenced the season with just one win from their first six games. Two of those losses, however, were consecutive one-point heart breakers against Emmaus St Leo’s and the Westies. Four wins from Rounds 7-10 got the Unicorns’ season back on track with midfielder James Tran leading the charge. A three-point loss to Old Paradians in the first semi-final was indicative of the Unicorns’ season, but they will be buoyed by their grand final appearance in U19 Section 5 after years of disappointment in the junior ranks.

Yarra Old Grammarians and Emmaus St Leo’s both finished with nine wins, but it was the Bushrangers who will rue missed opportunities after sitting in the four until Round 15. At 8-4 and two games clear of the next best, the Bushrangers slumped to six losses from their last seven games, including the final four on the trot. The Round 17 loss to the Raiders ultimately ended their season but it was certainly one to remember for Simon Yeo who performed consistently all year while Nick Chamberlain booted 43 goals.

Bulleen Templestowe, Eltham Collegians and Glen Eira each finished with seven victories, but it was the Gryphons who suffered relegation. Despite the average win count of the bottom two sides from every senior section being 3.1, the Gryphons were awfully unlucky as they claimed the most number of victories of any relegated side in the VAFA. As for the Turtles and Bullants, despite their disappointing seasons, they boast the two leading goal kickers in Division 2, Kristian Cherbakof (49) and Brent Gutterston (45).

Hawthorn AFC battled a severe loss of personnel following their 2016 Division 3 Grand Final defeat, with 14 senior players from that team retiring or joining rival competitions. As such, the Hawks struggled to find consistency and were unable to register a win, giving up 132 points per game. They gave up 100 or more points 14 times and hit that mark just once themselves (R12 vs Bulleen Templestowe) in a tough year for the brown and gold.