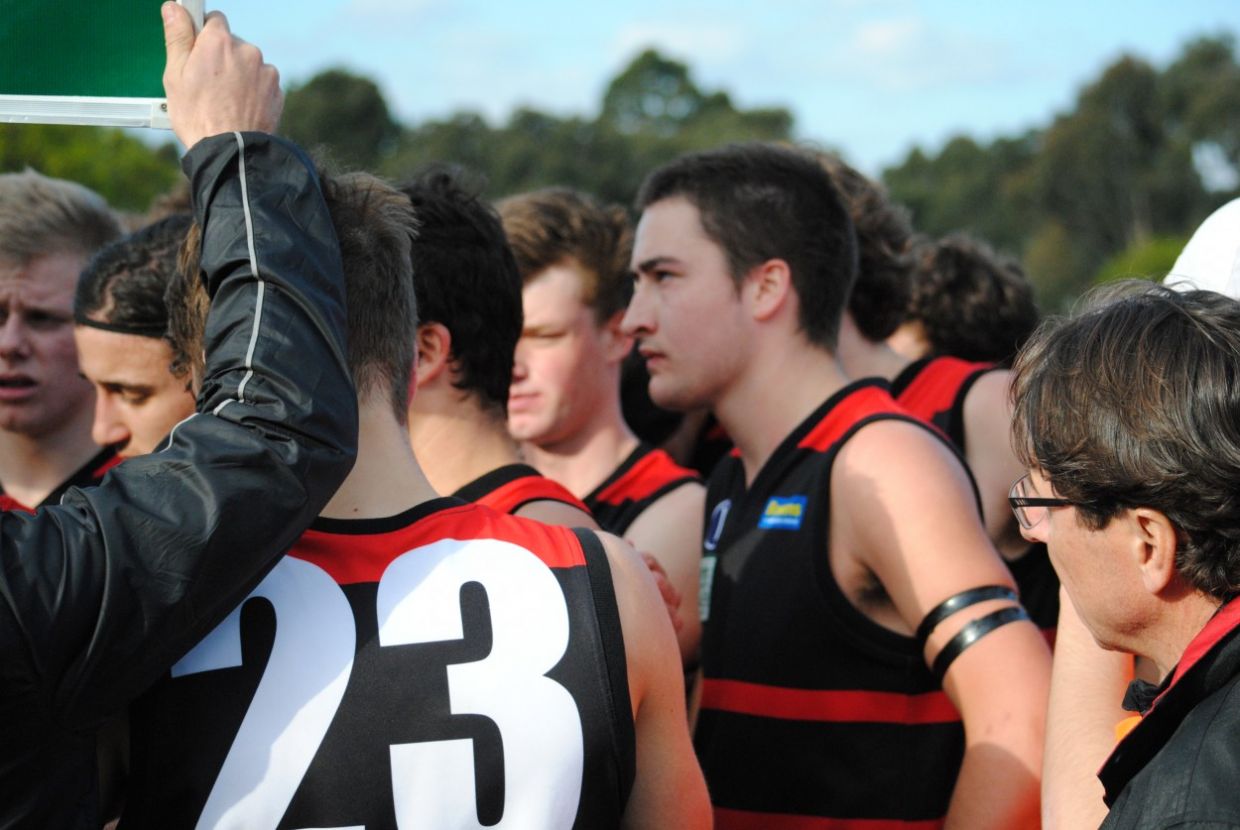 It took the Old Xavs Under 19 Premier side a half to click into gear but when they did, it was nothing short of amazing.
A game everyone expected to be tight, the 4-0 Old Xavs headed to West Essendon to take on a talented St Bernard’s (3-1) side determined to try and upset the 2013 competition ladder leader.
From the opening bounce it was clear that St Bernards were keen to attck the footy and show the opposition they are a force to be reckoned with. Bernards had all the running in the first quarter, tearing apart a solid Xaverians backline and kicking truly to take a 3.4 to 1.4 lead into the first break.
The second quarter started a bit like the first, Bernards were cleaner out of the middle and were getting there hands on the footy more than the Xavs were and kicked 5.1 in the quarter to the xavs 1.5, and taking a half time advantage of 32 points – 8.5.53 to 2.9.21.
Old Xavervians looked down and out, but Captain Harry Batten pulled the boys in before heading off to the rooms and said to his troops “remember this, remember the taunting, they think they have it won” and a good old fashioned bake from coach Joe Rush at the half time break got the boys going.
The third quarter was vastly different to the first half, the red and black boys looked sharper, faster, stronger and more switched on. Bernards kicked the first of the third but Xavs rallied and piled on 3 goals for the quarter to be 27 points down at the final change.
The stage was set for a grandstand finish, it was a quarter that could define a teams year. The belief was evident for the Old Xaverians and the home crowd knew the visitors weren’t going to go down without a fight.
The midfield shone for the kew boys, Batten, Symeopolous, Ongarello and Grigg all played a crucial role in getting them back, Ben Lyon got a handful of vital possesions in the last quarter to get the ball down to the goalkicking duo in Healey and Lachal. It was the mids who were kicking the goals though, Nash, Valles and Lane all slotted goals to cut the margin back to a kick
Enter Dennis Symeopolous who gathered in the forward line, broke a tackle and ran into goal to somehow put Old Xaverians up by a solitary goal.
In another epic final quarter to add to the many in Old Xaverians history, the Xavs kicked 5.2 to 0.0 in the last term to run out 5 point winners on a windy day in West Essendon.
It was a typical Old Xavs win, backs to the wall and they come from behind to win. A true testament to the players and coaches at the club.

John Donohoe is an Old Xaverians supporter and player when fit and is in his second year as a Journalism student at Swinburne University. If you would like to submit a match report to vafa.com.au then please send it through with a photo from the match to [email protected]