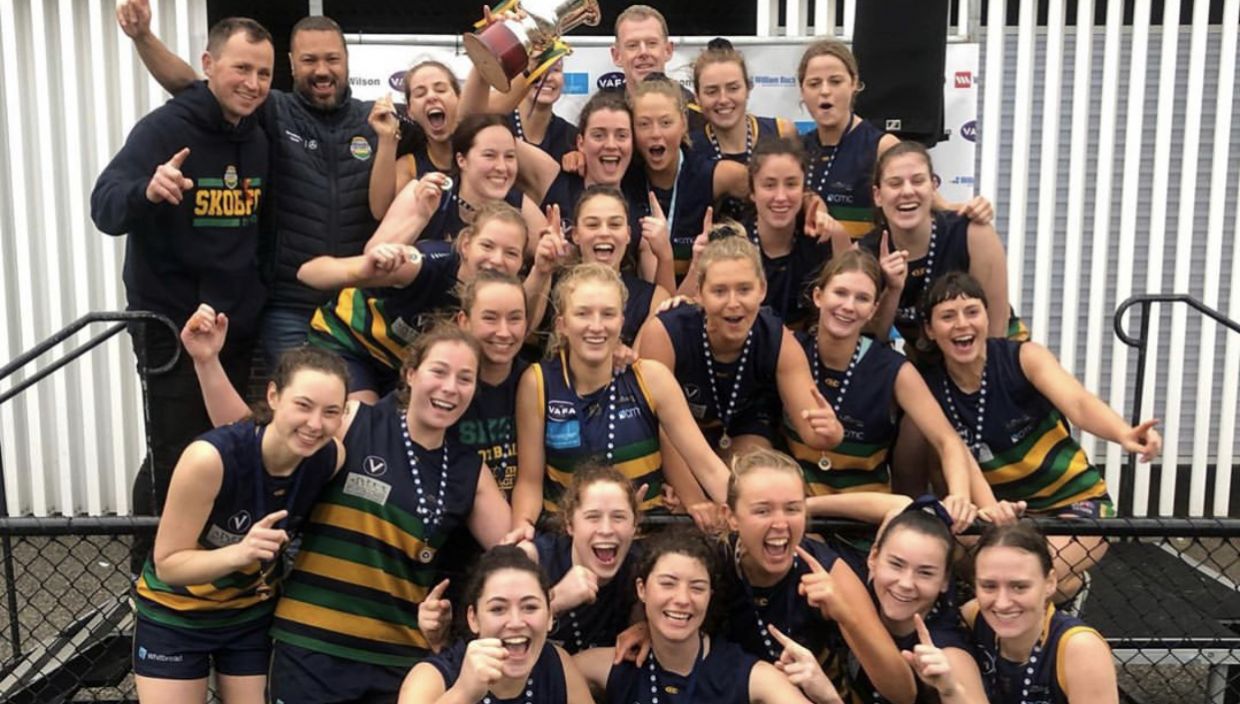 SKOB Saints have taken out the premiership flag in the William Buck Premier women’s section for season 2019 following a nine-point victory over West Brunswick. Played in trying conditions at Elsternwick Park, where rain and wind pelted the ground for the whole match, a scoreless opening term ensued before the Saints managed two points in the second quarter. With both sides able to find the middle of the sticks after halftime, with Jessica Joyce slotting one for SKOB and Helen Lawrence another for the Westies, only a point distinguished the teams going in to the final term. Putting it all on the line in the fourth and final quarter for the year, and inspired by a phenomenal boundary-line goal from Georgia Cropley, the Saints secured their first every premiership in the VAFA Wilson Women’s competition. Awarded for her standout performance on the day, SKOB’s Ellie McLinden was awarded the BOG medal from the officiating umpires. Gallant in defeat, Melissa Lindsay and Emma Lippmann were in the Magpies best for the day.

Not without success, however, West Brunswick claimed back-to-back reserves premierships after defeating Melbourne University by 20 points. The Westies made their presence felt early in this match, dobbing 3.3 in the opening half all while keeping the Mugars scoreless. Not without a fightback, the University side had forward-line opportunities in front of goals in the final quarter but were unable to convert any majors (five points). Four individual goal scorers contributed to the Westies final score, including Gemma Gray, Isabella Gietzmann, Simona Castricum and Kristina Krithararis, while Brodie Aumont was awarded the BOG medallion. Samantha Marshall and Stephanie Perrott fought hard for the defeated Mugars.

Caulfield Grammarians have emerged as premiers of Premier B after defeating Old Xaverians by 14 points. Played in equally as testing conditions at Mentone Grammar Playing Fields, the wet & wild weather limited scoring opportunities for both teams, so much so that the 0.0-0 (Old Xaverians) v 2.2-14 (Caulfield Grammarians) halftime score line remained unchanged until the final siren. For the victorious Fields, Irena Malliaras’ brilliant performance earnt her the BOG medallion, while Kate Macqueen and Montana White dobbed a goal each. For Xavs, Caitlin Hickey and Gabby Golds were fantastic.

The 14-point victory margin in the senior match was replicated in the reserves, as Old Geelong defeated Old Xaverians. The Oggettes led from start to finish in this contest, managing a 13-point buffer at halftime thanks to their 3.1 to Xavs 1.0, before adding a further 1.4 in the latter half to Xavs 1.3 to take out the flag. Vicky Tan was deemed the BOG by the officiating umpired thanks to her three goals in the OG’s victory. Hannah Ryan and Demi McLaren led from the front for Xavs.

Yarra Old Grammarians ran out 21-point victors over Brunswick Renegades in the Premier C Grand Final at Mentone Grammar Playing Fields. Making the most of their chances early, before the inclement well and truly hit, Alyssia Blewonski (2) and Georgia Hatton (1) were responsible for the Bushrangers’ three majors for the afternoon, while the umpires awarded Sarah Kerr the BOG medal due to her four-quarter efforts. For the Renegades, who were held goalless for the first time all year, Samara Griffin and Andie Bleicher were standouts.

Canterbury held off a surging Mazenod on their way to claiming the Premier C reserve premiership title for 2019. Getting off the mark early, the Cobras had a ten-point lead at the first change of ends before the Nodders made it a one-point ballgame at halftime. Two majors in the third quarter gave Canterbury a 14-point lead at 3QT, before a gutsy Mazenod kicked 1.6 in the final term to fall short by just two points. Georgina Callaghan (Canterbury) was awarded the BOG Medallion for the afternoon, while teammate Mary Spillane bagged two majors. Magdalene McPhee and Michella Angelucci worked tirelessly for Mazenod on the day.

Capping off a brilliant unbeaten season in Division 1 was Scotch Stars, who defeated Old Brighton by 73 points in the Grand Final at Mentone Grammar Playing Fields. Leading from start to finish, it was a five-goal to none second quarter which gave the Stars a significant 36-point at the major break, which they followed-up with a four-goal to nothing final term. The Tonners were held to their opening quarter score, 1.2, for the match entirety. With nine individual goal contributors, Anna Hayes and Lily Goss sat atop the pack with two goals apiece, while Mimi Hill was awarded the BOG medal. The Tonners, who should be enormously proud of their 2019 achievements, had Siena Visentini and Layne Davies as their best.

Therry Penola were crowned Division 2 premiers for 2019 after defeating Williamstown CYMS by six points at Elsternwick Park. A dominant opening term, where the Lions slotted five majors while keeping the CY’s scoreless, was the key to Therry’s first-ever premiership victory. True to form, however, Williamstown edged away at their 34-point 3QT deficit in the final term – booting 4.2 with the wind to almost snatch the win in an inspired fourth-quarter turnaround. Lions co-captain, Bridget Costello, was brilliant for the winners, and was the recipient of the BOG medal, while teammate Melissa Coulthard slotted three goals for the day. Hannah Elliott was responsible for two of the CY’s six majors, as teammate Shannon Egan was also brilliant.

Preston Bullants have claimed the Division 3 premiership flag for 2019 after beating Hampton Rovers by 21 points at Mentone Grammar Playing Fields. The Bullants notched a seven-point to nothing opening term in this Grand Final battle, before the Rovers gained momentum in the second to go into the halftime break with four-point lead. Swinging back in Preston’s favour in the third, where the higher ranked side booted two majors to Hampton’s one, the Bullants held firm in the final term and kept the Rovers scoreless while extending the winning margin to 21 points. Kicking a bag of five for the afternoon, the most of any women’s player in a Grand Final today, Kayla Del Monte was awarded the BOG Medallion – and was ably supported by Anita Overnden and Alli Fisher. Bree-Anna Kavanagh and Bianca Lenarcic were listed in Hampton’s best.

A 22-point final siren margin saw Glen Eira/Old McKinnon claim the Division 4 premiership title over Ajax at Mentone Grammar Playing Fields. Like so many of the Grand Final results across the entire VAFA Wilson Women’s competition, the team with the early ascendancy came away with premiership silverware – and that was no different here. The Gryphons strongarmed a 31-point buffer by halftime, although a determined Jackettes outfit did manage to outscore the minor premiers 3.1 to 1.0 in the final quarter to almost cause an upset! Like her form all season, Maddy Lister (Glen Eira) was again prolific and earnt the BOG accolade accordingly, while teammates Bridget Graffeo and Zoe Rossiter also held their own. For Ajax, Lindi Nankin and Amy Sekler (2) were gallant in defeat.