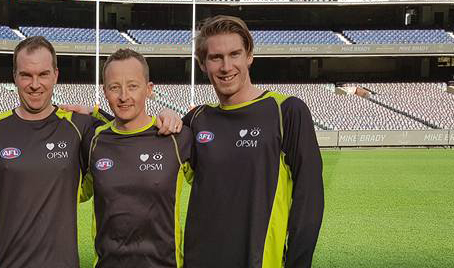 Following Matt’s performance in the AFL Grand Final between Richmond and Geelong, he was selected as the standalone All-Australian Goal Umpire alongside Matt Stevic (Field) and Matt Tomkins (Boundary).

A fantastic achievement by Matt after 10 years of dedication to his craft.

VAFA Umpire Operations Manager, Matt Dervan, will have a front row seat to this Saturday’s AFL Grand Final between Richmond and Geelong after he was appointed as one of the two goal umpires at the GABBA.

Matt, who has narrowly missed out over the past few years after officiating preliminary finals, said it is a great privilege and honour to finally gain selection.

“To be involved in the first grand final to be played at night, and on the GABBA will be such a special memory for me, and something that I will always reflect on with pride and gratitude,” he said.

“I am eternally grateful for the outpouring of support I have received which has been overwhelming these last few days.”

Matt commenced his umpiring career at the age of 10 and is one of many AFL umpires who honed their craft through the VAFA system before going on to the elite competition.

“I can now add to the list of umpires Brian ‘Benny’ Goodman has coached/managed to umpire an AFL grand final,” Matt said.

“Benny believed in what I could do progressing through the levels and always had the confidence in me to achieve success.”

While Matt has been umpiring with the AFL up north throughout 2020, he has been simultaneously working with the VAFA umpiring and football operations team ahead of our own 2021 season.

“I am so lucky to have received this opportunity and without the support of Brett (Connell), Sam (Confait) and the VAFA Board, this wouldn’t have been possible without their willingness to support my umpiring personally, while having the confidence I could continue to work on pushing VAFA umpiring into its next phase,” he said.

“To finally get the big one, is in a small way a huge thank-you to them for giving me this chance.”

The VAFA congratulates Matt, Simon and Steven on their incredible achievements and look forward to watching them in action this weekend.