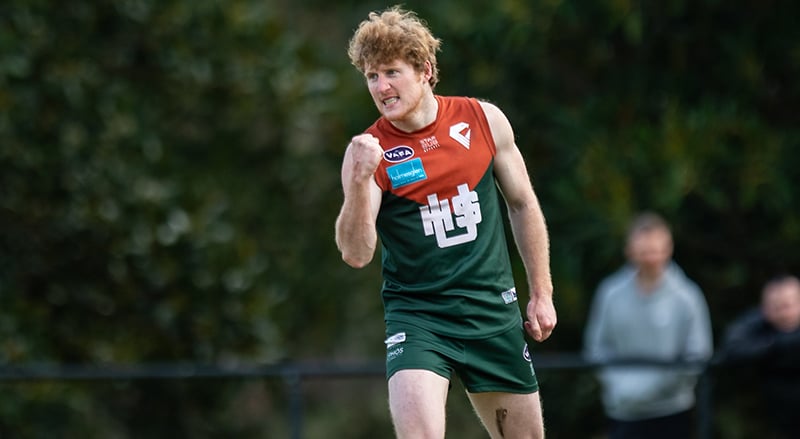 Victory worth its weight in gold in Premier C

After the last lockdown extended the double bye one more week, Premier C football is back. With only five matches left to play in the season, each win is worth its weight in gold.

In what is one of many great games this week, the Hoers will host the Nodders in a crucial third vs. fifth match-up. Last time these two met, Old Ivanhoe ran away with the game early taking a subsequently insurmountable lead of 34 points into half time. Skok, Velluto and Mitris all chipped in with eight goals combined to allow the Hoers to run away 49-point winners. There is little chance this game goes the same way. Mazenod has been in incredible form, winning five of their last six behind great team defence (opposition average score of 55 over the last six games) and the standout play of star mid Samuel Michael. The Hoers, on the other hand, have not been in bad form either – having now won their last five games. Old Ivanhoe is a big side, boasting important key position players in all areas of the ground. This game should be close with potentially the winner going to third spot. I expect the Hoers’ height to be too much in the end.

Last time these two met, Old Geelong was up by 70 at 3QT and the game was well and truly over early. After a couple of good wins against Preston, the Vultures have dropped their last two games and are looking to rebuild some form. Ben Dimattina and Patrick Brookes are ones to watch, but they may have an uphill battle travelling to Como Park this week. The Oggers have won their last four, and in that stretch, John Simson and Scott Dixon have been prolific. Perhaps a more worrying sign for the competition, Christian Hatzis has kicked 19 goals over that four-game stretch – including against top tier defences in Ormond and Mazenod. There may be just too many spot fires for the Vultures to try and put out this week and I expect Old Geelong to win comfortably.

The Eagles will still be thinking about missed opportunities from their round 3 match-up with Ormond. Holding a 27-point lead at half time, Marcellin could only manage one goal to Ormond’s nine in the second half as the Monders completed a terrific comeback behind the dominant display of big man Steve Tolongs who kicked five goals. Despite a horror start to the season, the Eagles are only two games out of the finals, and with a percentage of 114, nothing is out of the question. Marcellin has won their last two and they boast a star-studded midfield including Patrick Howe, Jeremiah Antypas and Jordan Perry who have all been in great form this year. Will it be enough is the question. Ormond, after losing three straight, pulled off the upset of the year breaking Monash’s undefeated streak in a massive win at home. If the Monders can find a way to hit the scoreboard as they could early in the year, they can beat anyone anywhere. The battle of Max Kennedy vs. Jordan Perry and Jack McCartney vs. Patrick Howe should be great to watch. I expect the Monders to win in a close one at home.

You would not know it by looking at the final score, or their current ladder positions, but Preston actually led Monash by two points at half time in round 1. At 3QT, however, the Blues were up by 38 points and the game was over. Jackson Curic kicked five goals that day for the Bullants, who are still seeking the club’s first ever win in the Premier sections. Back-to-back thrashings after two losses to UHS-VU does not put Preston in great stead for this week’s match-up against the ladder leaders, however, anything can happen in footy and maybe Curic can whip up some more magic. Monash will be heavy favourites entering this week, especially after they lost to Ormond before the break. Something tells me that big Mac Cameron, Daniel Easson and Nick Argento will seek to put this one away early.

Sitting at 4-1 at the time, Hampton was expected to steamroll their way through the 2-3 Panthers who had just come off blowing a six-goal lead to Marcellin the week before. Old Mentone had other ideas that day, pulling off an incredible upset beating the Rovers by four points. Jai Florent, who was prolific winning the VAFA Rising Star that week, said it was the best Old Mentone win he has been a part of. It has been a tough slog for both teams since that game. The round 6 loss set the Rovers on a five-game losing streak as they now sit at 4-6 are now in a must win position if they want to play finals this year. Chris Perkins and Christian Carnovale have been great for the Rovers in their losing streak, but they will need some help this week if they are going to win. Old Mentone has won just the one game since round 6, but that win was a 95-point pumping of Preston just before the break. Angus Grant kicked eight in round 12, and there will be a heavy load on his shoulders again. This game is as 50/50 as it gets, but I see the Rovers getting back on the winners’ list.